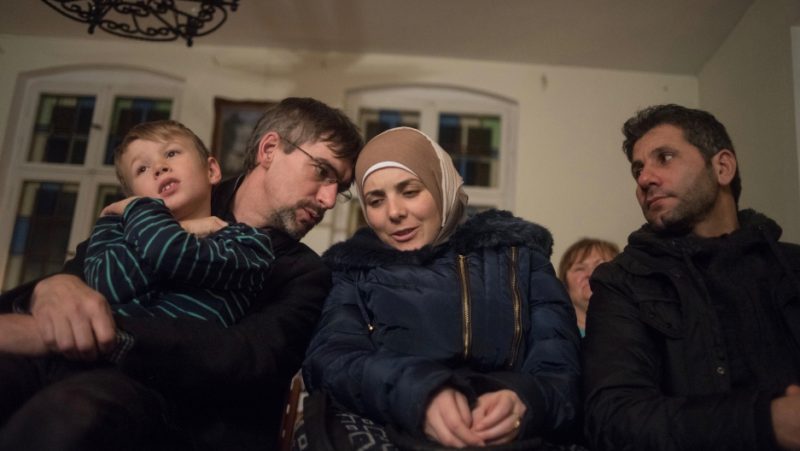 Golzow mayor Frank Schütz, left, leans over to whisper a question to Rasha Haimoud during a holiday concert. She and her husband, Ahmad Haimoud, are refugees who settled in the small former East German town after escaping the war in their native Syria. Credit: Shane McMillan. Used with permission.

This story by Matthew Bell originally appeared on PRI.org on January 10, 2017. It is republished here as part of a partnership between PRI and Global Voices.

Many towns in the former East Germany have told the federal government that they would prefer not to be asked to resettle refugees, who’ve entered Germany by the hundreds of thousands in the last couple of years.

The night I visited the village with a population of about 800, five or so miles from Germany’s far eastern border with Poland, the annual Christmas concert was happening. Every seat in the tiny Lutheran church in the town center was filled.

For two members of the audience, this was something very new. Ahmad and Rasha Haimoud are a married couple with four kids. As a Muslim couple, originally from northwestern Syria, it’s unsurprising that they’d never spent any time in a church before. 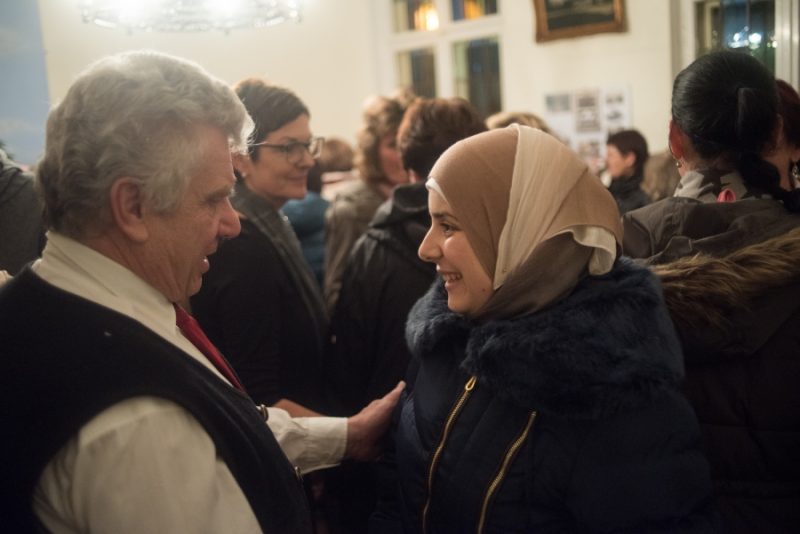 A member of Golzow's Protestant Church greets Rasha Haimoud following a holiday concert. Haimoud's family is one of three Syrian refugee families that moved to the village in the last year. The town invited the Muslim families to their annual Christmas concert as a sign of welcome to the rural community on the Polish border. Credit: Shane McMillan. Used with permission.

The Haimouds moved to Golzow back in February 2016, so this was their first Christmas in their new hometown. When someone asked, they said they didn’t have a Christmas tree at home. But they were planning to get their children presents. And so were some of their new neighbors.

After the performance, Ahmad and Rasha mingled with some of their neighbors. There was an awkward moment when Rasha realized most of the snacks include pork. They told me they make the two-hour drive to Berlin twice a week to get halal meat and other foods they’re used to putting on the table.

But they said they are settling in well. They are both taking German language classes. Rasha said she hopes to go back to university and Ahmad plans to get work laying tile. They told me, all in all, they feel very lucky. 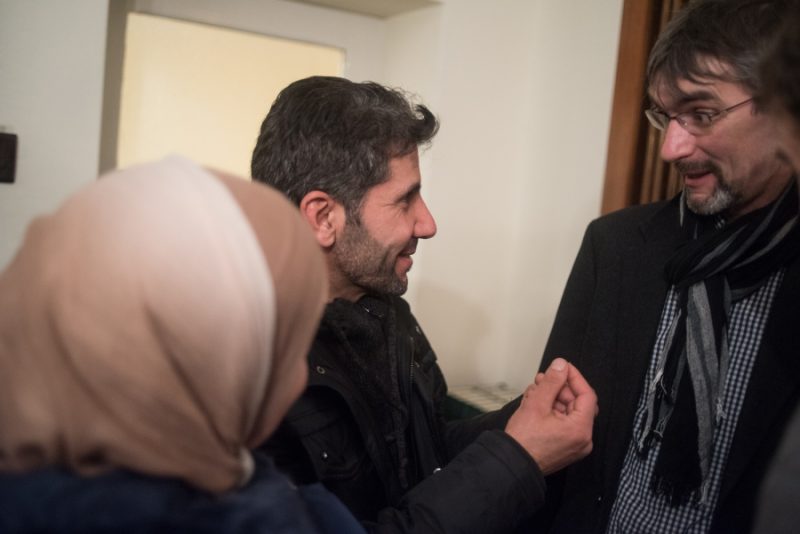 Ahmad Haimoud speaks with Golzow mayor Frank Schütz following a holiday concert and reception at the village's small Protestant Church. Schütz says he was happy to accept the families into their community as it allowed the city to fill then-empty apartments, avoid converting a nearby sports-facility into a refugee shelter, and help to keep the local school open. Credit: Shane McMillan. Used with permission.

“We are very thankful to Germany,” Ahmad said in Arabic, as Rasha translated into German. “We came here for the future of our kids,” she added.

It turns out that Golzow is thankful too.

The Haimouds are one of three Syrian families who relocated to this village in the past year or so. They all have lots of kids. And together, the refugees are helping to save the one place that makes this small German village somewhat famous.

If you mention Golzow, people all over Germany will know about the elementary school there. That’s because of a TV show. 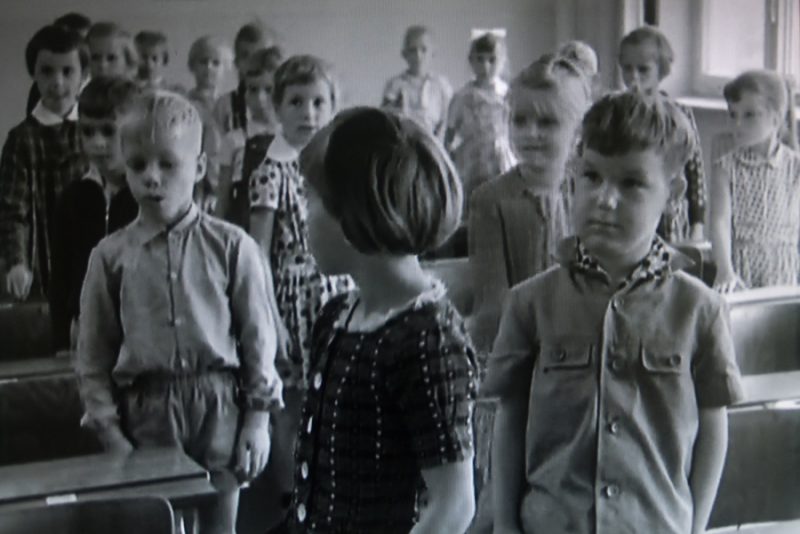 From 1961 until 2007, the filmmaker Winfried Junge created a series of documentaries called “The Children of Golzow,” in which 18 residents of Golzow were filmed at regular intervals from childhood into adulthood. The school, which last year was in danger of not having enough students in some grades to hold classes, played a big role in the series. Credit: Shane McMillan. Used with permission.

In 1961 an East German film crew started following a class of first graders. The documentary film project aired on German television for decades, right up until 2007. It followed the same group of kids into adulthood, starting at Golzow elementary.

But all that notoriety could not save the school from a harsh reality. Much of the former East Germany has been in economic decline. And the population of Golzow had dwindled to the point where it looked like it wouldn’t be able to sustain its only elementary school.

“The problem goes back to the days after the [Berlin] wall came down,” said Gaby Thomas, the director of the elementary school, where she also teaches English.

Last year, there were barely enough kids for a full first-grade class.

Thomas said that she and the town mayor, Frank Schütz, decided it was clear what they needed to do: go find some refugee families with school-aged kids to move to Golzow. 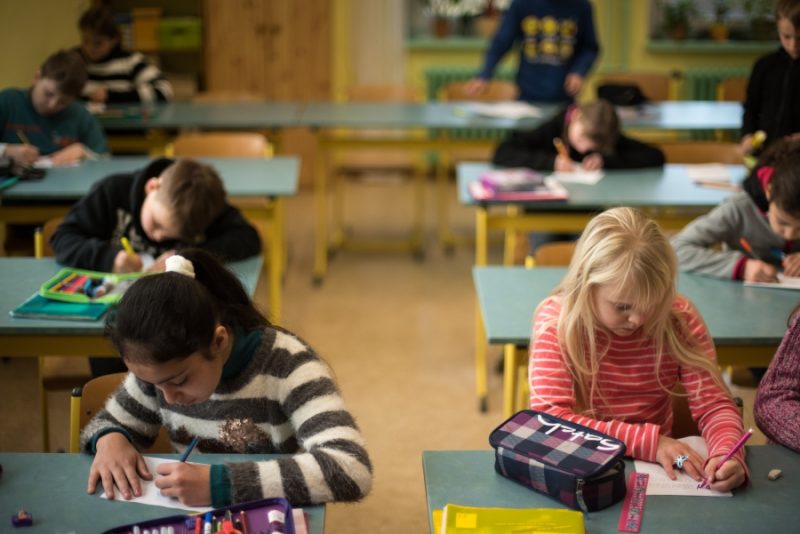 Students work on an assignment at the elementary school in Golzow. Credit: Shane McMillan. Used with permission.

Just ahead of the holiday break, I stopped by Thomas’s fourth-grade English class. It was a lively — and full — classroom. And that’s thanks in part to two girls from Syria.

Thomas said her two Syrian students are doing very well in school. They’ve been here less than a year and they’re speaking German with ease. 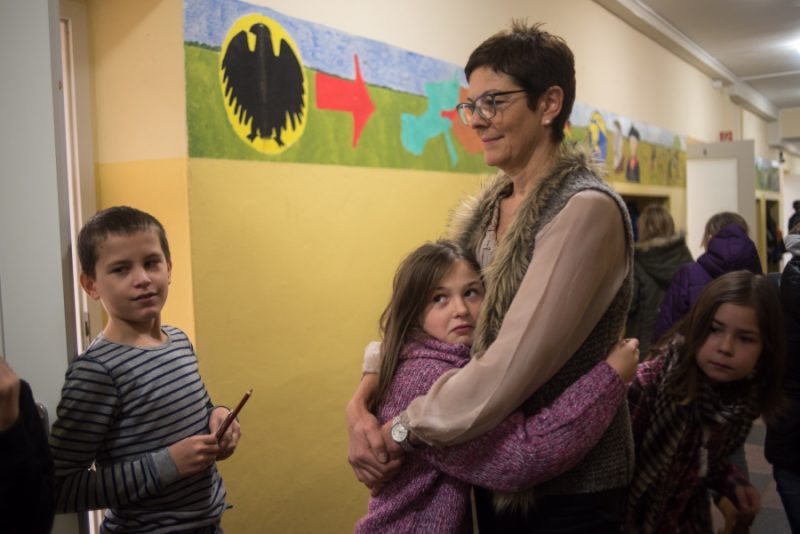 Gabriela Thomas, director of the elementary school in Golzow gives a student a hug between classes in the main hallway. Thomas says that the children of the refugee families are already fitting into her school very well. Credit: Shane McMillan. Used with permission.

A total of eight Syrian kids helped fill enough seats to keep up enrollment and maintain class sizes. This was especially important after state authorities raised the prospect of closing the school.

The Syrian families are living in houses that were empty not long ago, and they don’t have to pay rent for now. Mayor Schütz said, at first, some of the locals were against the idea of letting Muslim refugees move in.

But he said they’ve come around.

“We have given the refugees a new home,” Schütz said. “But they saved our school. And they brought the laughter of children to our village. So really, they have given us more than we have given them.”

Frank Hessenland contributed to this report.