China's Top Judge Warns Against the ‘Threat’ of Judicial Independence 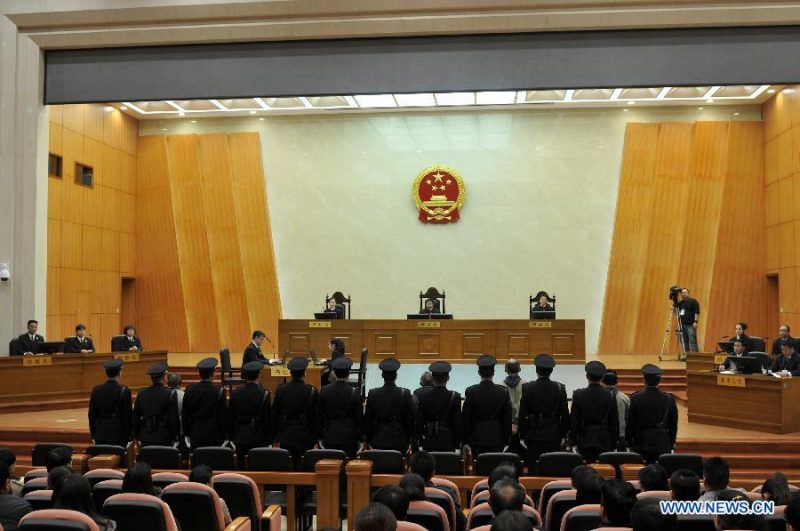 A court in China. Xinhua photo.

The term “rule of law”, referring to the idea that no one in a society is above the law, has become a popular phrase used by top Chinese leaders in their public speeches. But any emerging hope for justice in China has been dampened by the ongoing crackdown on human rights lawyers, the practice of airing “confessions” of those accused of crimes on TV, and most recently remarks made by the country’s Chief of Justice Zhou Qiang.

At a Supreme People's Court meeting on January 14, Qiang warned the courts against the idea of judicial independence. He said:

Zhou's speech, widely reported by state-run media outlets, quickly provoked public outrage and a barrage of criticism from academics, intellectuals and a vast number of microbloggers on Chinese social media platform Weibo. Many accused the chief of justice of failing to uphold to Chinese Communist Party’s pledge of maintaining the rule of law.

The outcry attracted the attention of China's censorship authorities, and soon the headline of the article reporting his speech, “Must dare to show the sword to judicial independence and other erroneous western notions”, became unsearchable on Chinese social media. The newspaper People's Daily withdrew the article, and the Supreme People's Court published a series of posts on its website and via major media outlets to explain Zhou's position in more moderate language. But people are continuing to speak out against the ideological position.

‘Rule of law has been turned into an empty promise’

Xiang Songzuo, a prestigious economist, pointed out that the current outflow of capital in China was related to the lack of commitment to the rule of law:

According to some data, in China, there are about 90,000 rich people who can invest above 100 million yuan, and about 1.34 million rich people who can invest above 10 million yuan. 65% of them are eager to shift their assets abroad, and 60% choose the US as the destination. Their biggest concern is the risk of uncertainty in the system. The administration should pay more attention to this phenomenon. Now [the chief of justice] has denounced constitutional democracy and judicial independence. The pledge to follow the rule of law has been turned into an empty promise. How can people live and work in peace when their lives and properties can’t be protected by an independent judicial system?

Xiang's comment was echoed by many who are considering leaving the country. Weibo user “Wrong path” said:

The speech should be the best migration service advertisement of the year.

It seems China’s political reform just cobbles things together and can’t achieve substantial progress, running contrary to the world's advanced political civilization. So desperate that all 1.3 billion people should flee the country.

As the chief of justice stressed that the Chinese path is distinct from that of the rest of the world, a Weibo user mocked:

This is a such a distinctive country with special characteristics where judges oppose judicial independence, media oppose free press, upright officials oppose property disclosure, people oppose one person, one vote.

Those in more outspoken circles were more straightforward in expressing their discontent. According the Radio Free Asia, a number of Chinese human right lawyers have launched a joint signature campaign calling for Zhou Qiang's resignation.

One of the initiators of the petition, Lin Liguo, accused Zhou of destroying China's international image. He stressed that without judicial independence, the result is the abusive use of law in serving political interests as reflected in the crackdown on human right lawyer since July 2015.

A sudden change of heart?

In the past few years, under the Chinese Communist Party's call to rule of law, Zhou Qiang has reviewed and overturned some significant unjust cases, including the wrongful execution of Nie Shubin 21 years ago; given judges more independence; and restricted local officials’ influence over court rulings, though ultimately courts at all levels are not independent and should answer to the party leadership.

Some, including famous historian Zhang Lifan, have hence interpreted Zhou's sudden change of attitude as a self-protective move to keep him away from a power struggle happening within the party before the 19th National Congress of the Communist Party of China.

Against this backdrop, political news commentator Wu Zuolai explained on Twitter how judicial independence can be interpreted as a threat to the party:

Judicial independence is quite a threat. For example, if many people decide to sue Xi Jinping's government, and if Zhou Qiang is independent, he could subvert the central government or Xi with law. That's why Zhou needs to be submissive and declares to the public that there is no judicial independence — that he has to obey the central government. Under the dual track system, the party and the national security police use political prosecution to solve their problems, while other problems are solved by the rule of law or by corrupting the law.

Regardless of Zhou Qiang's intention, as the top representative of the Chinese judicial system, his speech is a declaration that the future of judicial reform in China is very gloomy.