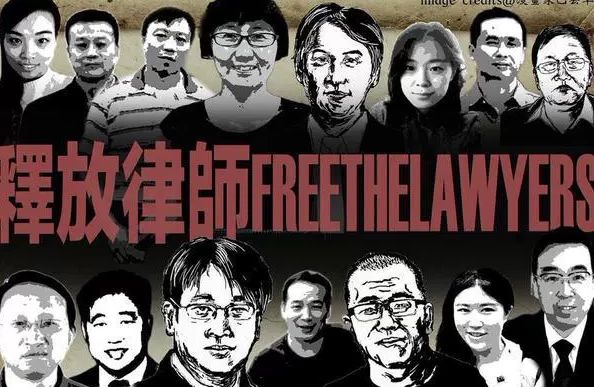 In a rare invitation-only trial, a Chinese court from Tianjin city sentenced four prominent human right lawyers and activists to jail on “subversion of state” charges. All four pleaded guilty and expressed remorse in a trial that was attended by state-controlled media organizations and is being viewed as a show of Chinese muscle against ‘foreign forces’.

The convicted men and women are all connected with the Beijing-based Fengrui law firm, which has a history of taking on politically controversial rights cases, and is accused of being an internal ‘conduit for western infiltration.’

In the months leading up to the trial, state-controlled media outlets described the law firm as a criminal networks of lawyers, online opinion leaders and trouble makers, who channel public opinion and incite public disorder in the name of human rights.

In the trial, the founder of the Fengrui law firm Zhou Shifeng and former political prisoner and religious leader Hu Shigen were sentenced to seven years in jail, while activist Zhai Yanmin and lawyer Gou Hongguor were given a suspended three-year sentence.

The four are a part of an original group of about 300 lawyers, legal assistants and activists, who were associated with the law firm, and were arrested and interrogated between July 9 and September of last year.

While many were released within a day or two of questioning, at least 22 continued to be detained, including Hu, Zhou, Zhai, and Guo. Some have been held without access to family and lawyers.

Weeks before the trial began, some of the detained lawyers, including Zhao Wei, a legal assistant of the firm and Wang Yu, a prominent human right lawyer, appeared in newspaper interviews and video confessions, expressing remorse for their work. They also blamed foreign forces for using the Fengrui Law firm to undermine the Chinese government. The government claimed the both Zhao and Wang were released but their families and lawyers still don't know their whereabouts.

Currently, about 20 are detained, are under house arrest or have been forcefully disappeared.

A law firm that dared to take on human rights issues

Since 2001, the law firm has taken up many politically sensitive human right cases, such as suing diary producers over contaminated infant formula milk in 2008, defending members of Falun Gong, journalists, and human right activists including Uighur academic, Ilham Tothi, who was accused of inciting separatism in 2014.

These legal battles were labeled by the state controlled media as “criminal activities” that challenged state security and China's fundamental political system; and the Beijing Fengrui Law Firm was called “a premeditated, planned, organized clique that collides with foreign anti-China forces”. Their concrete examples of ‘anti-China forces‘ are foreign media outlets, such as the Associated Press, which has extensively covered the crackdown on the law firm, and foreign embassies, diplomats, and human rights organizations that have urged the Chinese government to release the arrested.

The case against them boils down to a ‘dinner.’

However, it still takes concrete evidence for building up a state subversion case. The critical evidence presented in all four cases concerns a dinner gathering at a Beijing restaurant called Seven-spice-BBQ (七味燒). The gathering was interpreted as a meeting that conspired to overthrow the ruling Chinese Communist Party. Following that logic, human right lawyers Liu Shuqin explained in the Weiquanwang, a website devoted to documenting Chinese human rights incidents, that anyone can be charged with subversion, if all its takes is the evidence that was presented on trial:

After the trial on the July 9 crackdown I now know that the threshold to build a case on subversion is so low and the logic in the interpretation of evidence can be that loose.

Just imagine: On a particular day in a particular month, a few good friends get together for dinner with other acquaintances at a BBQ restaurant. Please note, the restaurant is not an isolated boat floating on a lake, but an insecure place, crowded with other customers. On the dinner table, an old man, who had been jailed for many many years, makes a speech about factors that can lead to a peaceful transformation of the regime: the need for civil society to grow, the internal conflict within the regime, and international attention. Please note that the old man was talking about peaceful transformation, not a violent transformation. Those who attended the dinner all agreed, some might even have suggested that the theory could be applied to workers strike and other human rights campaigns. This is the birth of a subversion theory and the fact that everyone joined in the discussion without counter arguments means a full endorsement of the plan.

That very moment, a team was formed and headed by the old man; a team composed of human rights lawyers, political activists, underground church organizers, grassroots protesters, who are ready to work together when time comes.

Liu continues to explain that once the theory and the plan is established, all actions that challenge the government's authority will be viewed as a subversive act, even though the action itself might be legal and well within Chinese law. More importantly, the lawyers and activists that pleaded guilty, were detained for more than one year without access to counsel and family, during which time their families were constantly harassed by the authorities. Liu concluded that the whole trial is a grand show for “foreign forces”:

Since July 9 last year, the case has been set to perform to the world. It is a grand show that everyone has a role in – the family relatives [who were monitored and harassed], the defending lawyers and the lawyers, the secret police, the big brother in the dark. […] Look at Zhai Yanmin who accused others with enthusiasm; look at Zhao Wei who attacked her benefactor in public; look at Wang Yu who kept saying that she was used; look at Zhou Shifeng who kept apologizing to his assistant; look at Hu Shigen, the old man in the white hair, he confessed, showed remorse and refused to appeal even though he was sentence to seven and a half years in jail.

What exactly is this grand show about? A commentary on China Change pointed out that the crackdown is a political decision made in 2012 rather than a real subversion threat:

It’s increasingly clear that the Chinese communist government is treating the “709 incident” [July 9 crackdown] as an international face-off with Chinese security state. It is consistent with an assessment in 2012 by a think tank of the Chinese Ministry of National Security that names rights lawyers, underground religion organizers, dissidents, internet opinion leaders, and disadvantaged social groups as internal conduits for western infiltration.