Chinese Authorities Are Burying Their Heads Not in Sand, But in Smog 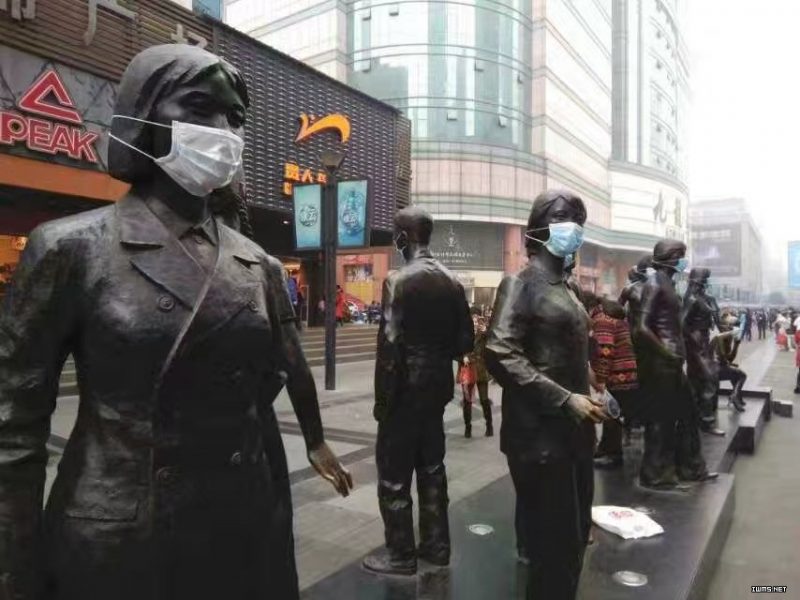 Protesters put masks on statues outside the World Financial Center in Chengdu to protest against toxic smog in the city. Image from Twitterer @caichu88

Nearly two dozen cities in northern China have been hit by smog since late November. The level of fine particulate matter, or PM 2.5, in the air over the past two weeks was above 300 microgram per cubic meter (µg/m³), and in some places above 500 μg/㎥. That much pollutant is hazardous to human health and can cause lung disease, emphysema, lung cancer, or premature death in individuals with existing heart or lung conditions.

On December 15, the Ministry of Environmental Protection gave advice to 23 cities across the country to issue red alert on air pollution. Beijing was the first city to follow the advice and announced a five-day red alert.

A viral photo taken by a Beijing reporter on December 16 from atop a newly built high-rise building in Beijing shows how the smog has affected the city:

What an amazing shot of a smoggy #Beijing below taken from the top of CITIC's new China Zun building! #北京 #雾霾 pic.twitter.com/noX4milXVn

Worse still, a recent scientific study found bacterial genes that lead to antibiotic resistance in air samples from Beijing in January 2013 when the city was hit by smog. Though it will take further study to see the implication of the existence of such genes, scientists view it as a threat to public health.

Some studies have estimated that air pollution has caused up to a million premature deaths in China every year. Beijing officials have admitted that China has the world’s worst air pollution problem and vowed to take measures to clean up the air. Last year, Beijing introduced the alert system, and one of the measures taken since early December is the deployment of mist cannons in major cities:

However, the parade of the mist cannons is ineffective and many see it as a mere political performance for the people. The reappearance of the popular online meme “serving smog to the people” (喂人民服雾), which is a phonetic twist on the Chinese Communist Party motto “serving the people” (為人民服務), in past weeks reflects people’s frustration with the pollution.

Public outcry against air pollution over the past few years has failed to bring about any positive change, stoking widespread discontent. Though officially the problem is acknowledged and authorities have made sure that the sky is blue during major events, such efforts are viewed as superficial.

A recent study conducted by a local Chinese research team showed that after local governments took temporary measures such as shutting down factories and restricting the number of vehicles on streets to create clear skies for political events, pollution levels not only bounced back afterward but rose even higher than they were before the events.

The issuing of red alert compels affected cities to introduce a similar set of temporary measures — the halting of construction, restrictions on cars and the shutting down of factories — that are considered disruptive to people's daily lives and do not address the root cause of the pollution.

In fact, authorities often treat efforts to dig into the cause of toxic smog as disrupting social order, as shown in the crackdown on citizens trying to bring public attention to the problem in Chengdu, a major city in Sichuan province.

Below is a brief report on the citizen action there by U.S based citizen reporter @caichu88:

The Post-90s generation in Chengdu protested outside the World Finance Center in Chengdu on December 8. Recently, Chengdu was polluted with smog and Post-90s people protested outside the financial center, demanding that the government tackle the problem. Since December 6, a message has gone viral on social media among Chengdu residents: Chengdu trapped in fog. We bury our heads in the smog. Fuckk the para-xylene (PX) chemical factory in Pangzhou, it's turning Chengdu into a toxic city.

Back in 2013, residents in Chengdu rallied against the stage two expansion of a chemical factory in Pangzhou, but the campaign failed. After its expansion, Chengdu has been affected by dark smoke coming from the chemical factory campus since July 2015. Currently, the project has entered the stage three expansion period.

Instead of addressing the public's concerns in Chengdu, the government deployed riot police to stop the protest, and some netizens who uploaded protest placards on social media were detained. On WeChat, all discussions about Chengdu’s smog problem were deleted. Reportedly, the authorities have instructed doctors from Chengdu’s hospitals not to draw any connections between smog and illness.

Twitter user @xiucai1911 mocked the authorities’ approach in dealing with the smog problem:

New tale about burying one’s head in the sand: “Report to the leader: The problem of the smog has been solved!” “Great! How did you manage to do that?” “We have deleted all posts about the smog, banned people from wearing masks and arrested those who wrote about the smog!”

After the issuing of red alert warning on December 15, there have been more mainstream media reports about the smog and related health advice. However, all the discussions about where the smog is coming from remains banned.