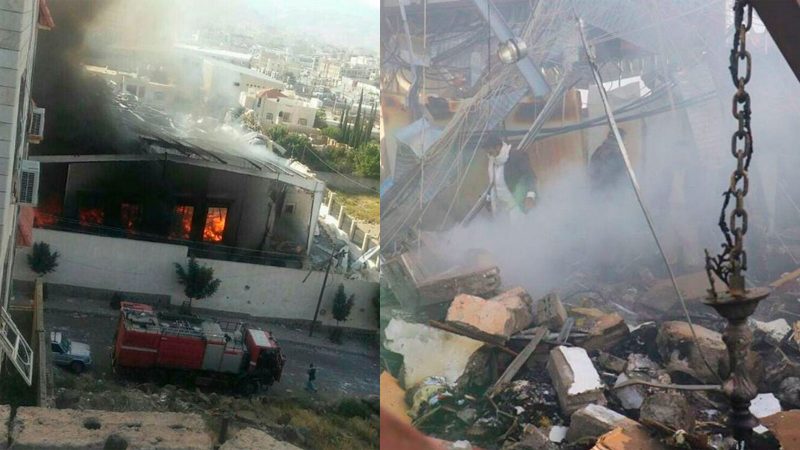 On October 8, 2016, airstrikes by the Saudi-led coalition killed at least 140 and injured more than 525 people in Sanaa, Yemen's capital, according to the UN.

The airstrikes targeted a funeral ceremony held by Jalal al-Ruweishan (جلال الرويشان), the minister of interior, who is allied with the Houthis, the rebel group that took over Sanaa in 2015 and is loyal to former President Ali Abdullah Saleh (علي عبدالله صالح). The Houthis have been fighting the government of Abd Rabbuh Mansur Hadi (عبدربه منصور هادي), heavily backed by the Saudi-led coalition, ever since, in what is now referred to as the Yemeni Civil War.

The Saudi-led coalition has already denied responsibility for the attack. Al Arabiya quoted the coalition as saying:

The coalition's statement was immediately questioned, however, by none other than the White House, Saudi Arabia's primary backer internationally, which released the following statement:

U.S. security cooperation with Saudi Arabia is not a blank check. We have initiated an immediate review of our already significantly reduced support to the Saudi-led Coalition and are prepared to adjust our support so as to better align with U.S. principles, values and interests, including achieving an immediate and durable end to Yemen’s tragic conflict.

Then, Saudi Arabia itself announced that it was launching a probe into strike, calling it “regrettable and painful,” several hours after denying any role in the incident:

Many commentators, such as Iyad El-Baghdadi, noted that the bombs used by the Saudi-led coalition were made in the United States:

The bombs used in yesterday's massacre in Yemen by the Saudi-led coalition were made in the United States https://t.co/5gX9dJO7DT

The death toll is expected to rise as hospitals are still receiving more injured. The Yemeni branch of the United Nations Office for the Coordination of Humanitarian Affairs (OCHA) condemned the attack, saying:

Within minutes of the attack, Yemeni activists and analysts were active on social media, condemning the bloodshed. Anwar Dahak, a Yemeni activist, told Global Voices that it quickly became obvious that the funeral was targeted deliberately:

We were few miles away from the funeral reception when we heard the aircraft roaming around the area. Once we heard the airstrikes, we knew they were bombing the funeral. I still can’t believe what happened. Not even Israel is that brutally inhumane.

This video uploaded by Hamed Ghaled, a Yemeni activist and member of the General People's Congress Party, which was founded by the former President Ali Abdullah Saleh, reportedly shows a double airstrike on the funeral hall:

At least one high-ranking official was killed, the mayor of Sanaa. Shfinews reports that “Abdul Qader Hilal was killed in the airstrike”—a statement confirmed by Hakim al-Masmari, the editor of the Yemen Post to Al Jazeera, among others.

Abdul Qader Hilal was killed in the airstrike on al-Ruweishan funeral. We belong to Allah and to Him we shall return.

Tens of thousands of Yemenis have taken to the streets to protest against the massacre:

Tens of thousands in Sanaa take to the streets to protest the #Saudi massacre on a funeral hall in #Yemen. #sanaamassacer pic.twitter.com/VcvR4LdYvC

Yemen-based political analyst Hisham Al-Omeisy says there's no doubt as to who the perpetrators are:

#PT FYI, Saudi coalition has full control of Sana'a airspace where only own fighter jets in sky. “It wasn't us” BS not gonna cut it. #Yemen

Riyadh's war on Yemen has become a political assassination program. Saudi princes cannot complain if Yemenis retaliate the same way on them. https://t.co/2sOb5GULuB

Both Bafana and Al-Omeisy added that Saudi jets could still be heard over Sanaa moments after the attack:

Bloodthirsty Saudi fighterjets back in Sana'a sky. We haven't even pulled everyone from under rubble of earlier airstrikes yet! #Yemen

I watched the air strikes, which took place barely 1.5km from my house. They first used a normal missile that pierced the roof. The second was an incendiary missile, burning the whole inside of the hall. The third was a missile on first responders.

Dahak confirmed this in comments to Global Voices:

Fairah Al-Sulimani, a Yemeni entrepreneur, tweeted a photo of the funeral hall before and after the attack:

Before and after the airstrike around 2000 were in the funeral most of them still under rubble till now #Yemen pic.twitter.com/cjAAd1HtSB

Yemeni journalist and media specialist Mohammed Al-Asaadi, who is based in Sanaa, shared a photo of ambulances evacuating casualties from the grand hall:

The International Committee of the Red Cross (ICRC) in Yemen was among the organizations supporting struggling health facilities:

We're mobilizing to support health facilities deal with the influx of dead and wounded. 300 body bags & medical supplies on the way #Sana‘a

Al-Omeisy quoted a volunteer saying that they “pulled a hand sticking out from rubble—a severed arm. Too many bodies nearby to tell whose.”

Volunteer "Pulled hand sticking out from rubble, was severed arm, too many bodies near to tell whose." Sana'a #Yemen pic.twitter.com/Z0DDLGrJOH

Meanwhile, the Yemeni branch of Doctors Without Borders tweeted updates about the airstrikes and their aftermath:

1. Six @MSF-supported hospitals in #Sanaa, #Yemen treated more than 400 wounded after an airstrike hit a funeral hall south of the capital

Farea Al-Muslimi, a well-known Yemeni commentator and co-founder of the Sanaa Center, says urgent action is needed to implement an immediate ceasefire, a resumption of peace talks, and an international inquiry:

#US / #UK Made, Sold, and Fueled jets with #Saudi pilots killed & injured more than 400 civilians in #Yemen today targeting a funeral hall.