The Role of Hashtags in a Country Searching for Peace 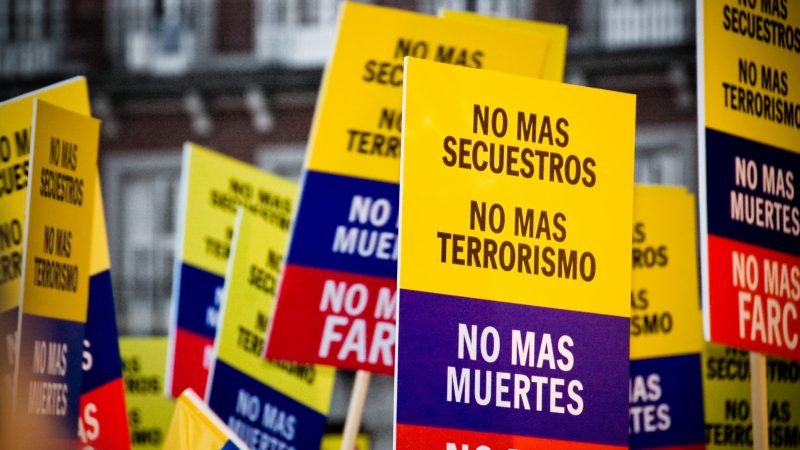 In the image: “No more kidnappings”, “no more terrorism”, “no more deaths”. Photo by Camilo Rueda López. Published under the Creative Commons License.

This article was written and published by Colombian reporter Renata Cabrales on Medium, and an edited version is republished on Global Voices with the author's permission.

Cabrales analyzes some of the particular social aspects regarding a peace agreement currently being worked out to end the internal conflict between the Revolutionary Armed Forces of Columbia (FARC) and Colombia's current government, which has kept the country at war for more than 50 years.

The negotiations have divided popular opinion between those Colombians who view the process towards peace as the government surrendering to the FARC and those who want to take it as another step towards national unity, despite the difficulties. The author of this article clearly expresses her support for the process towards peace, but analyzes how both sides have used social media to express themselves and how disagreements have been played out online.

If there were a prize given for the most cliché word of the last few years within Colombia, “peace” would win. It hurts me to say so, but this is simply the case. It has been used this way and that, and I myself have used it to show my own stance on the historic moment that we are living through here in Colombia: an agreement to end the armed conflict with FARC that most of us, erroneously, call “peace.”

Amid all the threats, insults, opportunism, criticism, and pacifism, I have tried to analyze Colombians’ robust use of hashtags, whether in open defense or disagreement with the peace process currently taking place with FARC. From this rough analysis, based on daily experiences and conversations with friends and colleagues like Rosa Cristina Parra, Carlos García, Perla Toro, and others, I have created the following list of things that are key when communicating via Twitter in times of peace.

It is easy to create hashtags, given that all you have to do is write a word and put the pound symbol # before it. The key lies in having good composition. And it is here where we have gone wrong.

Thus, my first recommendation is this: keep your hashtag simple and direct. Of course, if a hashtag is poorly written or misspelled, as was the case with #ResisteciaCivil (which is missing the “n” in Resistencia), there is nothing to be done about it.

2. Seize the vacuum left by the dissenters

As citizens – and not as institutions, such as @EquipoPazGob (@TeamPeaceGov) –  it is best to come together under inoffensive hashtags. A good example is #ResistenciaCivil (#CivilResistance), under which opponents of the peace agreement have united.

And to what end? They have united in order to insert positive content, to refute, to demonstrate, to demystify, and to counteract, as Rosa has done @RosaCris. (The Sí or “Yes” refers to the upcoming referendum in which Colombians will vote to accept (“Yes”) or reject (“No”) the peace agreements.)

Tweet: It would be nice if someone would explain what YES means #CivilResistance
Image: “There is no road towards peace; peace is the road.” -Gandhi

There is no guarantee that the audience (either individually or in a group) will interpret the information exactly as the Twitter user intended. In the case of the peace agreement's adversaries, the vacuum left in the wake of peace for significant and historical terms such as “Civil Resistance” should be used to redirect the interpretation process. One must remember that we live in an era of superimposed, interactive realities.

3. The strategy behind the hashtag

Opponents of the peace agreement tend to use a hashtag as if they were competing in a stage of the famous Tour of Italy cycling race: they strategically start at a specific hour and then pick up speed whenever the rough mountain of “pro-peace” Twitter users appear, pedaling hard to produce the vast number of tweets needed to maintain their velocity.

It would be in our best interest to use this same type of organization while defending the peace agreement. This method also ensures that our content is relevant, novel, original, and wins more followers in less time, thereby allowing us to better position ourselves.

4. Quality vs. volume with a hashtag

When we talk about social metrics, the data can cloud our understanding and lead to misinterpretations. Numbers are functionally important due to their precision, depth, and context. But the context of the peace process makes it all quite special. This is why, within this context, we shouldn’t be upset by large quantities of content associated with a hashtag that becomes then a trend on Twitter. As José Luis Orihuela, an expert on social media, says, “The ‘trending topic’ is overrated.” This statement is even more pertinent in communications for peace.

5. Taking hashtags to the streets

If there is a tendency for Twitter to be, at times, like a sneeze – I'm quoting Orihuela again – it is up to citizens to take their cause from virtual hashtag to the physical realm. Peace is not taught through hashtags or sending messages to various groups on WhatsApp. Communicating the cause of peace transcends the merely virtual and goes hand in hand, according to the context, with rigorous, on-the-ground work, as Rosa Cristina Parra claims, making use of “real networks.”

6. Hashtags that go beyond current issues

There are as many positive facts and stories surrounding peace as there are Twitter users ready to listen to them if we actually succeed in connecting and conversing with people and not with ideological positions. We shouldn't wait for something to happen, such as the announcement of the younger generation leaving the war, to start a Tweet-A-Thon. In this, we have been wise. A good example, although once again preceded by a current event, is the following tweet:

It's finally time for peace! Culture, dignity, and life are now winning. We are all winning because now Colombia is #WinningThePeace

The fact that the war in Colombia also takes place on social media is an undeniable truth. Yet, paying money to gain an edge within a topic as delicate as the end of Colombian armed conflict should not even be considered.

Just a few days ago, journalist Ricardo Galán wrote on his blog about the rebellion of the “trolls” (who were, in his examples, people contracted to attack government authorities and political personalities on Twitter who are in favor of a vote for “Yes”). Sooner or later, the harm such a practice does to the health of a brand, initiative, or person, will be made clear.

Tweet: The rebellion of the trolls II
Images: “These accounts were hired to write against Rodrigo Lara, Germán Vatgas, Roy Barreras and Enrique Peñalosa [who are politicians in favor of the peace process], but we didn't get paid.”