Australia’s Census Website Was Never Very Popular, And That Was Before Cyber Attacks Crashed It 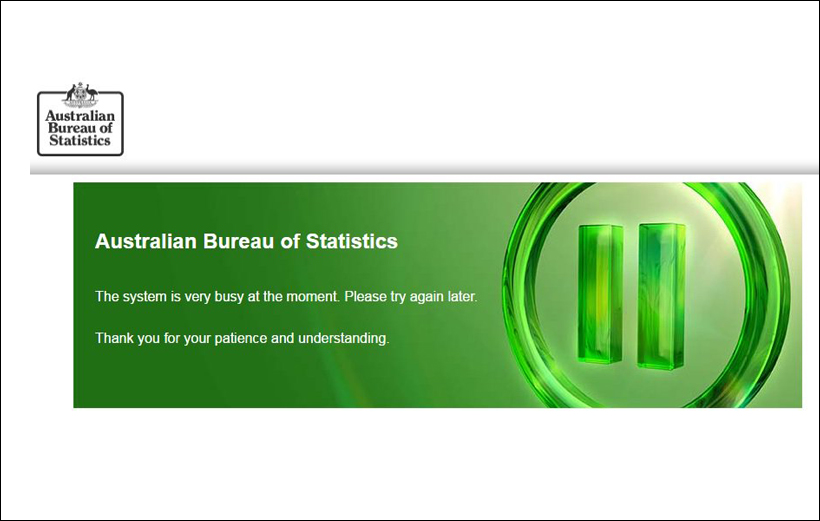 Even before Census Night on August 9, the hashtag “#censusfail” was already trending in Australia, where activists calling for privacy, anonymity, and security were leading an effort to boycott this year's national census, or at least refuse to provide the government with names.

At 7:45 p.m. local Eastern Time on Census Night, the Australian Bureau of Statistics shut down the census website following four Distributed Denial of Service (DDoS) attacks. Within minutes, #censusfail was one of Twitter's globally trending hashtags. Olympics references were inevitable:

This is pure Aussie gold https://t.co/yBDWXoRmx4

We filled in the @ABSCensus tonight online – v easy to do. And so important for planning better Govt services & investment for the future

“DDos” trended in Australia the next day, introducing many to the term for the first time, and the mainstream media was soon running reports asking, “What is a denial of service attack?”

I'm not saying it wasn't a DDOS… but… it is the oldest and most used handball of responsibility in the IT book. #census2016

The ABS system probably would have fallen over without the DDoS https://t.co/0WI1c1pVoW pic.twitter.com/wN5ZbayiTI

As was Mount Annan:

By DDoS, you mean asking 24 million people to log into @ABSCensus on one night #CensusFail

There were even tongue-in-cheek suggestions that the Olympic feud between Aussie swimmer Mack Horton and ‘drug cheat’ Chinese rival Sun Yang was the cause of the DDos attacks:

People complaining about the census website crashing, it's revenge by the Chinese #returnofthemack #census

Another popular meme picked up the classic “The IT Crowd” clip:

Given the time required to complete the online form, it was no surprise that others were less amused:

@ABSCensus Just wasted last 35 minutes completing census only to be unable to submit or save. What a joke.

Prior to Census Day, the online news site the New Daily had explained people's concerns:

The Census will keep the data collected from Australian citizens, including their names and addresses, for four years, up from a previous 18 months in a move the Australian Bureau of Statistics (ABS) says will improve its research.

The longer retention times have been a source of protest, as fears relating to data privacy and security grow.

David Glance, the director of the Centre for Software Practice at University of Western Australia, shared his misgivings at The Conversation:

With names and addresses, the Census data can be linked to other data sets where we have already allowed our name and address to be used. This includes health, education and other data.

Anna Johnston, the director of Salinger Privacy and a former deputy privacy commissioner, explained why she intended to join the boycott:

[…] the deliberate privacy invasion starts with the use of that data to create a Statistical Linkage Key (SLK) for each individual, to use in linking data from other sources. Please don’t believe that SLKs offer anonymity. […]

Anna has been joined by several federal senators who say they would risk fines by refusing to put their names on the form.

Justin Warren at the website EigenMagic pointed out the potential benefits of linking more information, while highlighting certain problems:

I think the ABS… has become arrogant. They are convinced of the benefits of retention, and are dismissive of the risks.

…I remain unconvinced that the benefits of retaining name and address data outweigh the risks.

Matthew Rimmer, a professor of Intellectual Property and Innovation at Queensland University of Technology’s Faculty of Law, looked at the broader issue of privacy laws:

The census rides roughshod over our anonymity, privacy and security without our informed consent or voluntary participation.

Problems with the census’ privacy issues are compounded in an age of big data, cloud computing and hacking which point to an even greater need for privacy protection in Australia.

Another QUT academic, a social media and journalism researcher at their Digital Media Research Centre, Axel Bruns, summed up the credibility problem facing both the ABS and the government:

Finally, there is little doubt that the integrity of both the census data and the ABS has taken a major hit:

No serious person is gong to trust the ‘integrity’ of the outcome of this census in terms of data quality, surely