It's an Eraser! It's a Pizza! No, It's Iran's Olympic Uniform

As Iran's athletes prepare for the Olympic games, the team's uniform has come under public scrutiny. After the uniform was unveiled, complaints flooded in that it looked hastily designed or like a poorly done school uniform. One popular Iranian presenter even noted that the outfit bore similarities to an eraser.

A new designer was then brought in to modify the design. But Iranian social media users still weren't impressed. For many, the choice is now between a uniform that looks like an eraser or one that looks like pizza.

The video below sums up social media responses to the original blue-and-orange uniform's design. The clip begins with images of the flags of brutal militant group ISIS, and the narrator states:

Daesh [ISIS] has claimed responsibility for the design of Iran's Olympic uniform.

The narration continues with quotes from social media users.

The uniforms aren't even as well designed as school uniforms… I wouldn't even wear it to go to the corner store and buy yogurt…They are not even suitable for sharing on the “wall of caring.”

The video makes reference to a popular Instagram post by Iranian comic presenter Rambod Javan, in which he displayed the uniform next to a Pelikan eraser. The result? Well, you can see for yourself:

“I wish patience and tolerance for our Olympic team…Seriously, mashallah to the authorities on the choice of this design. Our athletes and all the training and hard work they've done… and then they are sent to the Olympics looking like this?” Iranian comic presenter Rambod Javan displayed the uniform next to a Pelikan eraser on Instagram.

Following the overall disdain for the drab uniform, a new designer, Kamran Bakhtiary, was tasked with sprucing up the outfit, and the revamped version was announced on Twitter by the Iranian Olympic committee:

But the new design is facing criticism too. Iranian satirist Kioomars Marzban likened the new uniform to Italian food:

The new Olympic uniform has been revealed | Now what kind of pizza are you in the mood for? 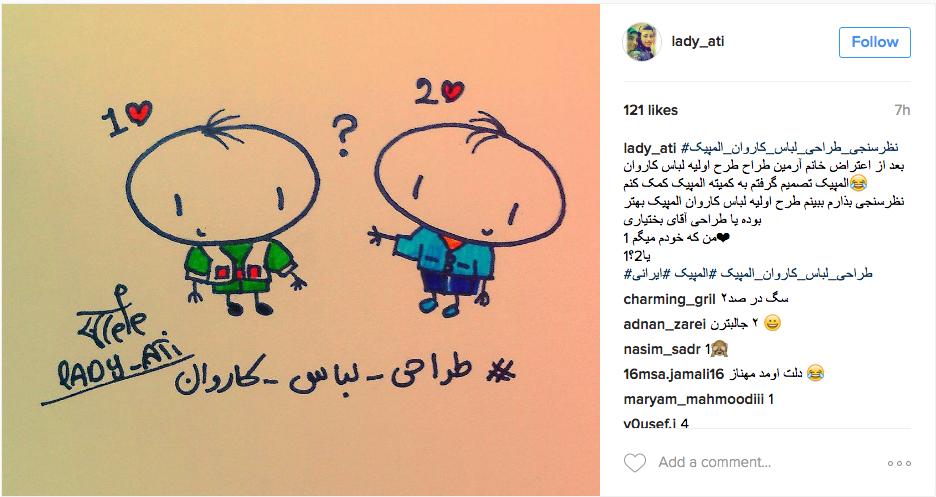 The caption reads: “#Opinion_of_the_design_for_the_Olympic_uniforms_by_Kamran_Bakhtiary The Olympic team has decided to help the committee out with a poll. Let's see which design is preferred, the first Olympic uniform or the one designed by Mr. Bakhtiary. Myself, I like the first. You? 1 or 2?”

The original designer, Mahnaz Armin, finally broke her silence on the “misuse” of her design. Instagram user enaytialireza posted a screen capture of her comment.

In it, Armin claims that the Olympic Committee destroyed her design to cut costs. She writes that the project was taken from her and given to a young and inexperienced designer. Armin's account appears to have been taken offline since then. 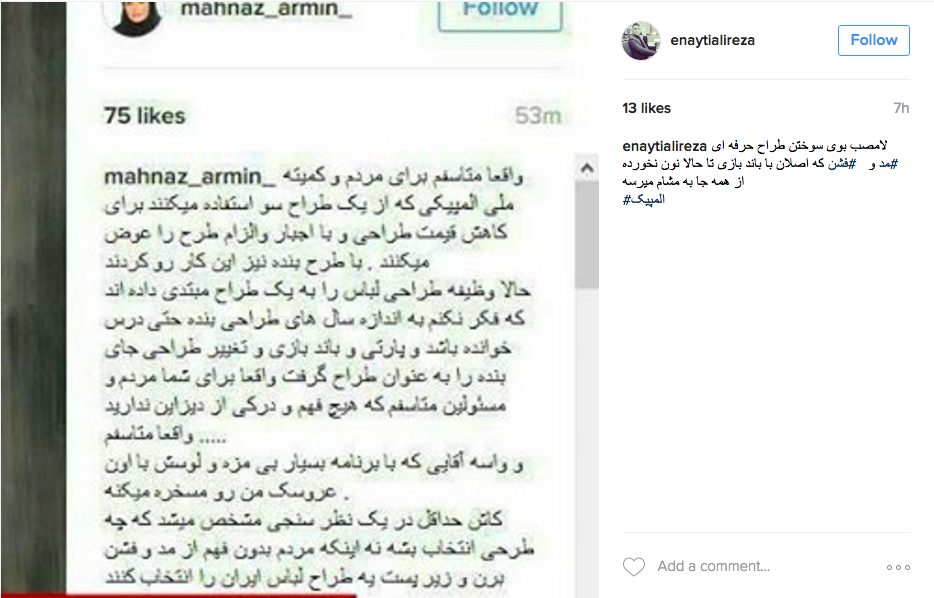 Enaytialireza writes: “It smells like a professional designer got burnt — someone who has no taint of corruption…”

Finally, Twitter user @Aghajoon lampooned the new design in his tweet featuring a baby dressed as a watermelon.

#Kamran_Bakhtiary announced that the Olympic uniform has been modified. Here is the new design. So no one complain — we don't want to upset our athletes

For more on this story, check out IranWire and the BBC. And for more in-depth coverage on the 2016 Summer Games from Global Voices, read our special coverage page: Joy, Disappointment and Injustice at the Rio Olympics.