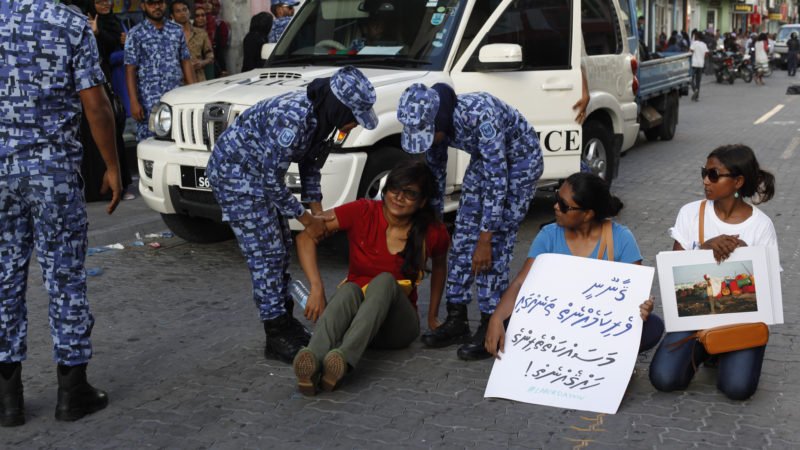 Maldives Police blocked May Day 2016 march organised by the Maldivian civil society. Image from Flickr by Dying Regime. CC BY 2.0

A newly launched opposition platform in Maldives held its first rally on July 21, 2016, in the capital Male, despite the government's refusal to give permission.

Thousands turned out for the meeting of the Maldives United Opposition (MUO), where opposition leaders spoke and some exiled leaders joined via teleconference.

A ban on street protests in the capital Male has been in force since a police crackdown on a three-day protest staged by the opposition party Maldivian Democratic Party last November. The police have since blocked several opposition protests and gone after journalists and newspapers covering the protests.

#Maldives @PoliceMv taking down banners announcing opposition rally. Must be to increase space. On the wall. pic.twitter.com/xWYLld7iAR

On June 1, 2016, a number of Maldivian opposition parties and prominent political figures launched the MUO platform, calling for the restoration of functional democracy in the Indian Ocean island nation. Dr. Mohamed Jameel Ahmed, former vice president of the Maldives who is now living in exile in the United Kingdom, is heading the platform; his deputy is Ali Waheed, the chairperson of the Maldivian Democratic Party.

Its advisers include heavyweights like Mohamed Nasheed, the first democratically elected leader of the Maldives who was was also given political asylum in the UK; Sheikh Imran Abdulla, leader of the Adhaalath Party; and Colonel Mohamed Nazim, former defence minister in the present Maldivian government.

The MOU had originally planned to hold its first rally on July 14, but was forced to reschedule July 21 due to bad weather. They had vowed to hold the event despite the housing ministry cancelling their permit at last minute.

Alternative date will be announced soon as tonight's MUO Rally was cancelled due to bad weather. pic.twitter.com/AVRZHAZh1a

The agenda of the MOU is to remove President Abdulla Yameen Abdul Gayoom through legal means and try him for money laundering. The platform also seeks to “protect the rights of 1700 individuals currently under prosecution, investigation and arbitrary arrest”.

Nasheed had resigned as president a year earlier on February 7, 2012 amid protests against his government. Participants included a majority of military and police forces. Nasheed later described the events as a coup and said he was forced to step down at gunpoint, although his characterization has been questioned.

In March 2015, Nasheed was convicted under the Anti-Terrorism Act of Maldives and sentenced to 13 years in prison. Amnesty International called the trial a “travesty of justice“.

Yameen has proposed governance reforms that would codify some of this behavior. Maldivian expat blogger Azra Naseem at Dhivehi Sitee called the reforms concerning:

Under the plan for reform, Yameen is making criticism a crime, is removing all opposition through legal and other means, wants to establish a one party system, and will engineer the electoral system or the voting system in such a way that he will remain in power for a long time to come.

Though the MOU rally was eventually held, Member of Parliament Ahmed Mahloof, the spokesperson of MOU, and three others were briefly detained on July 16 while promoting the June 21 rally. Journalist Mohamed Junayd reported:

Mahloof didn't seem to let the arrest damper his spirits:

The rally was ignored by many government media outlets, but the political parties involved, private news organizations and citizens all posted to social media:

After May Day last year, huge turnout at an anti-govt demonstration in #Maldives as @mvopposition holds first rally. pic.twitter.com/44cestD72w

There are images of the rally uploaded to Facebook too. It remains to be seen how this new platform will affect politics in Maldives in the near future.