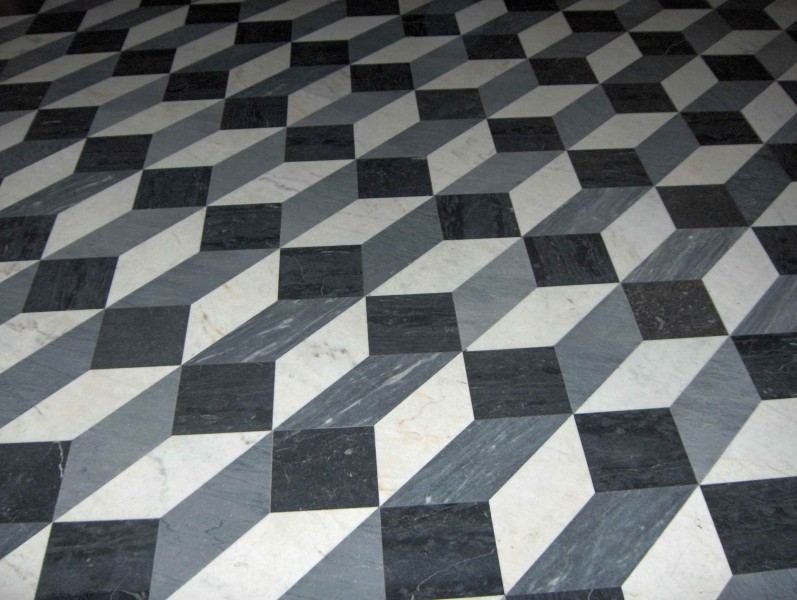 Floor tiles at the Basilica of St. John Lateran in Rome. The pattern creates an illusion of three-dimensional boxes. PHOTO: Public Domain

Social networks have been buzzing today with news of the July 7 shootings of police officers and civilians at a Dallas, Texas protest against the extrajudicial killings of Alton Sterling and Philando Castile earlier this week. Instead of just following and commenting on the news, however, Trinidad and Tobago twitter user @battymamzelle decided go deeper. “I think that's what I'll do today,” she tweeted. “Point out news frames and how they slant the story.”

Here are some excerpts from @battymamzelle's running commentary.

Think critically about what is reported and how it's being said. More importantly, look for what's being left off the page and why.

Riffing also off tweets from other users, @battymamzelle highlighted features of the Dallas media coverage such as the comparison of the killings with 9/11, although “police were not the main target of 9/11“.

Comparison w/o context. 9/11 did not target police. Note also lack of quotes from civilians. https://t.co/xMjbohGjtx pic.twitter.com/ao8w7H6oX6

The characterisation of the Black Lives Matter movement as a terrorist organisation:

This is an active choice to implicitly link BLM to violence against police. Watch that.https://t.co/uivqbXs3CI

The positioning of the shooter as “militant and anti-police” by selecting a photo of him wearing a dashiki instead of his army uniform:

Clearly, that does not align with the story. The war is supposed to be ON the police and armed forces, not FROM them.

And the repeated use of the shooter's middle name—”Xavier”—arguably to link him with Malcolm X:

Then we tie him to a civil rights leader who advocated violent retaliation as a justified response. Slowly, the picture takes form.

The New York Daily News’ was singled out for special mention, on account of the last-minute replacement of its original cover—which featured the names of black victims of police violence—with one about the Dallas events:

Again, agenda-setting. They are implicitly telling us that dead cops matter more than dead black people.https://t.co/wB32W9YJ7w

@battmamzelle staved off accusations of rabble-rousing by reminding the Twitterers of her credentials:

This thread isn't to be petty or rile people up btw. My BA is in journalism and my MA in Media Studies. I am just watching theory play out.