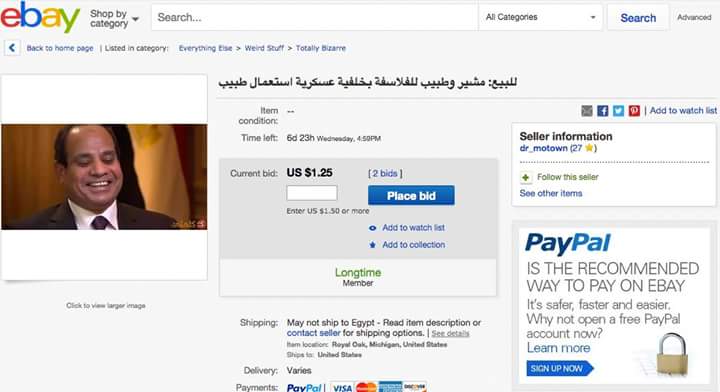 Egyptian President Abdel Fattah Al Sisi announced that if he could, he would sell himself to help the country's struggling economy and support Egyptians. Within minutes, an entry was up on eBay, offering the president for sale to the highest bidder.

The entry, which is no longer available, read:

For sale: Field Marshall and a Doctor of Philosophers, with a military background, used by a doctor

Sisi made the remark in a televised address while unveiling Egypt's economic development plan for 2030, where he also urged Egyptians to dig deeper into their pockets and donate to the country using text messages on the phone.

For sale or rent: an opportunity that will never be repeated. A [pimp] with the rank of Field Marshall. He currently heads a mob. Able to make millions laugh at the height of their misery. The offer is limited and available on a first come, first serve basis

Responding to Sisi's emotional speech where he noted he's willing to sell himself for Egypt: Sisi for $1 on eBay https://t.co/jl9HDhuu4S

Without even trying to suppress their giggles, Egyptians continued to monitor the bidding site, until the entry was removed, watching closely as the bid went from one US dollar to a stellar 100,000 US dollars.

Dima S tweets the bid at the half-way mark:

In his speech, Sisi also called on Egyptians to each “say good morning to Egypt with a pound,” which translates to donate a pound towards Egypt every morning, which also drew laughs on social media.

This Twitter user shares a photograph of an Egyptian pound:

Countries progress through science, industry, freedom, justice, equality, implementation of the law on all, and fighting corruption, and not from the backs of its people.