The Former Refugee Behind One of Liberia's Few Bookstores, Where Children Can Read About Themselves 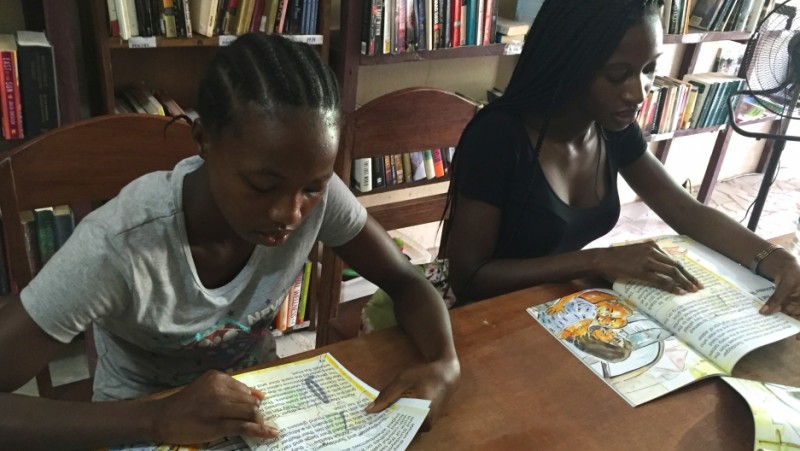 Girls like Miatta (left) come to storytime at One Moore Bookstore in Monrovia. Owner Wayétu Moore (right) also publishes books like the one they're reading, “Gbagba,” a Liberian word that means “corruption.” Credit: Prue Clarke. Used with PRI's permission

This article by Prue Clarke for The World originally appeared on PRI.org on January 30, 2015, and is republished here as part of a content-sharing agreement.

One Moore Bookstore, a small shopfront on a busy street in downtown Monrovia, represents many firsts. Though there are stores here that sell text books, this is the first selling books purely for reading pleasure. And its owners publish some of the only books aimed at Liberian children. The bookstore is a rare place where kids might hear a story read to them just for fun.

In this poor West African nation wracked by war, poverty and most recently Ebola, reading is not something people generally do for pleasure. Kids read when required in school, but Liberia still has one of the world's highest rates of illiteracy.

That will all change if the owner of One Moore Bookstore has her way. Wayétu Moore, 30, is a Brooklyn-based author who fled Liberia with her family when she was 5. She opened this book store here last year. And she's been publishing books for Liberian children since 2011.

Like children in other poor countries, most kids here only have the chance to read books donated from the West.

“These books are about Bobby playing baseball, or Cindy on the cul-de-sac,” Moore says. “And pizza, and things that really aren't typical of the everyday local Liberian child.” 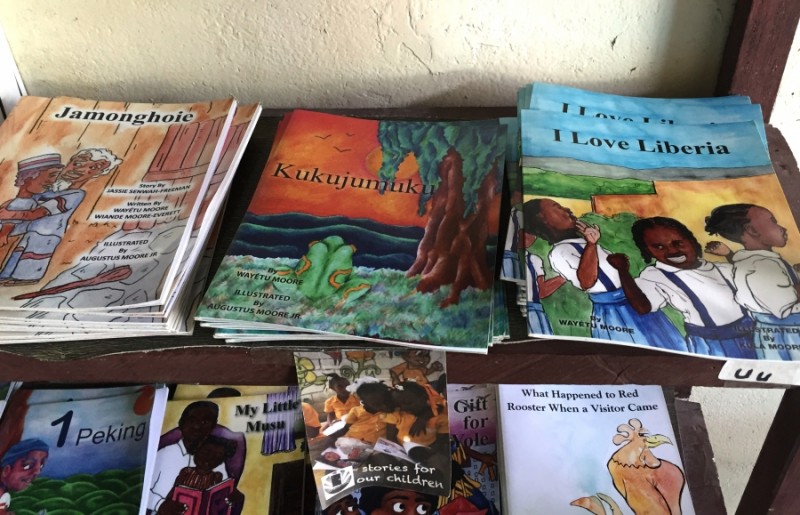 Some of the titles in One Moore Book's series for Liberian children. Credit: Prue Clarke. Used with PRI's permission

So with her sister Wiande, also a writer and their sister Kula, an artist, Moore set out to change that. They wrote “J is For Jollof Rice,” the first book ever done for Liberian children. Then came books with other Liberian writers and their artist brother, Augustus. Their publishing house One Moore Book has gone on to create a series with Haitian American author Edwidge Danticat. And they're now creating books for Brazil and Guinea; a fifth series will launch in Ghana later this year.

The books are having a powerful impact, says Liberian education expert Mamawa Freeman Moore. “You see the kids’ reaction to these books. Those are things that arouse their interest, and it motivates them to read.”

As a professor at the University of Liberia, Mamawa is well qualified to assess the impact of the books. But she has a bigger role in their creation: She's Wayétu Moore's mom.

In 1989, Mamawa Moore was a teacher and the mother of three little girls in Liberia. She won a prestigious Fulbright scholarship to study education at Columbia University, and her family decided it was too important to pass up. Mamawa left her children and husband for New York, unaware of the calamity that was about the engulf their country.

Within months Charles Taylor, who went on to become the first former head of state convicted of war crimes by an international criminal tribunal, had launched the reign of terror that would kill 250,000 people. Wayétu's father fled the capital with the girls on his back. They wandered for weeks, hiding in the forest and eating whatever they could find. Eventually they took refuge in a rural village.

In New York, Mamawa heard nothing. There were no landlines, no cell phone, no Internet. “The only news I heard from the family was what I saw on CNN,” she says.

And those reports were filled with stories of brutality and child soldiers. On top of it all, Mamawa was pregnant. She would give birth to a son in New York, not knowing whether the rest of her family was alive or dead. 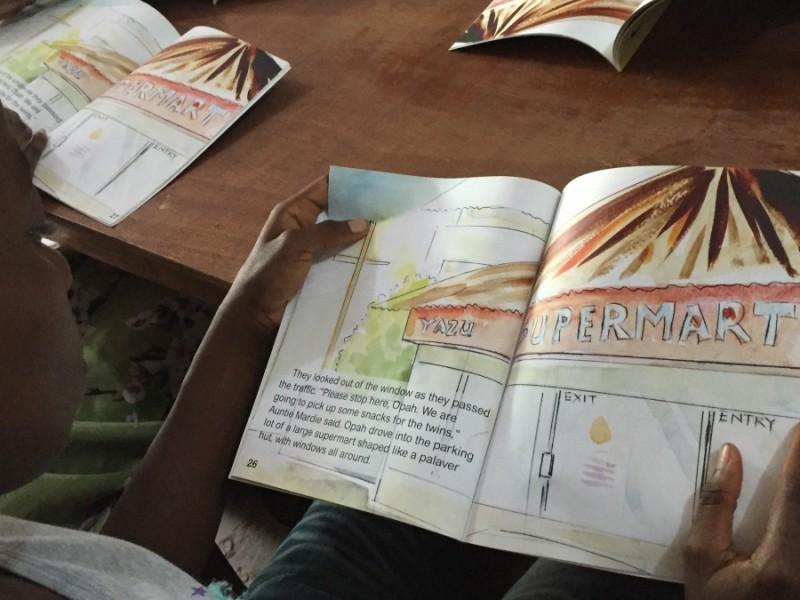 After the baby arrived, she knew she had to go and find them. Mamawa flew to neighboring Sierra Leone, and on the border she found a woman fighter who knew her family and was willing to bring them out.

Recounting moment still brings tears. “After almost a week she brought my family,” she says. “It was a joyful day. Very, very happy. I will never forget that day.”

Wayétu was five when they fled. Eventually the family settled in Houston, but the trauma left Wayétu shy and plagued by nightmares. Mamawa encouraged her children into the arts, hoping it would provide some relief.

Wayétu wants children in Liberia to have the chance for the same sanctuary she found. As she watches the kids in her bookstore read, she says she is driven by a sense of duty. She knows of girls who have to leave school every day to sell water sachets, and they can't go home until selling all of them. Girls like that don't have time to do homework, but Wayétu understands.

“I could be that woman sending my daughter out after school to sell just to make ends meet,” she says, as emotion catches her throat. “I would hope that someone cared enough to come back and give to her.”