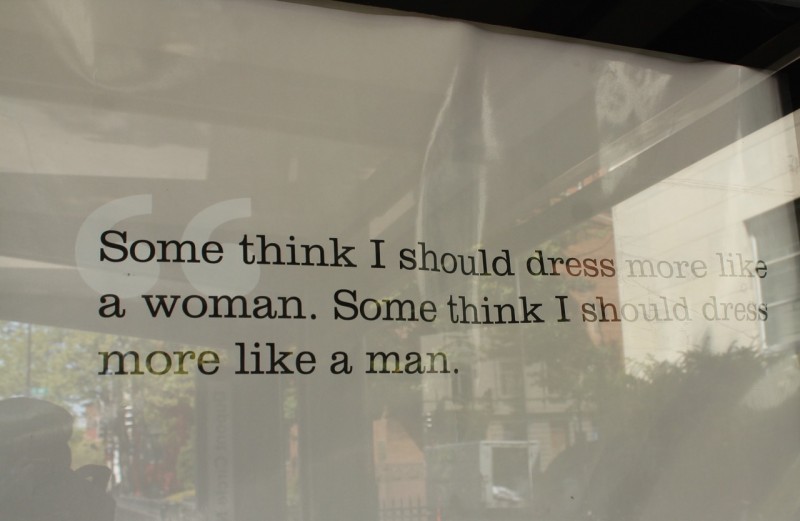 Somewhere along the line, Trinidad and Tobago gained a reputation for being something approaching a utopia for diversity. The country's national anthem boasts that “every creed and race find an equal place”, South African social rights activist and Anglican archbishop Desmond Tutu once famously referred to the twin-island republic as “rainbow country”, and annual Carnival celebrations see all ethnicities, ages, and sizes enjoying the biggest street party in the world in perfect harmony.

But there is a flip side to all this bliss. Far from being an inclusive paradise, the country suffers from underlying racial tensions, intolerance, and an elitism that is apparent even at Carnival's all-inclusive’ parties and masquerade bands. Given this reality, Trinidad and Tobago surprised many with its latest scandal on social media, where there's an outcry against a popular nightclub that refused to admit a young woman. With gender in the mix, an otherwise familiar story of intolerance has become unexpectedly new ground for Trinbagonian netizens.

Here's what happened. Shannon Jacob Gomes tried to get into Aria Lounge last Friday night, December 12. She was refused admittance at the door and wrote about her experience in a public Facebook post:

She [the hostess] reiterated that because I do not ‘project the image of a female in heels/flats’, she cannot and will not allow me free access to Aria because I am ‘not a normal girl’ and since I project the image of a man, she has to charge me the Male price. I responded that that is my personal business and if Aria released an advertisement stating that females between 9.30-10 pm (never stating females in heels/appropriate flats), and if I fit the legal requirement of a female, how can she not permit me. […]

Gomes demanded a public apology from the nightclub. In response, Aria denied any discrimination, saying that the decision was impartial:

Our staff had no intentions of discriminating against Ms. Gomes. They simply were treating her in a manner that was equal to a man, given our strict dress code. […]

Ms. Gomes attempted to enter the club wearing male clothing and we did not deny her entry however, she must pay the relevant costs as it will attribute to a male dressed in male clothing…The sole purpose being that, we cannot deny another female entry for wearing flats and in the same breath let Ms. Gomes wear flats and obtain entry. […]

Our club welcomes all types of people, who would like a night out of fun and entertainment, regardless of what ethnicity, background or sexual preference they may have.

I see a gendered identity storm brewing.
Good time to start a much needed discussion.

I just had to let you all know that your reply with respect to Ms. Gomes incident and wanting to charge her the cover charge of a male because she was dressed in ‘male attire’ is such a SHAME. It's is untrue that you all were not discriminating because you all would never let a guy dressed in female attire into the club or charge him a no cover or the cover charge for ladies right!!! You all are such a big SHAME to our diverse country in trying to move forward.

Exactly and it's disrespectful to Ms. Gomes. Apparently all females are supposed to dress in short clothes exposing themselves with high heels on and a mask of makeup. I'm not trying to bring sexuality into it but it appears as if the people at the door were homophobic. They assumed that because Ms. Gomes was dressed a certain way, she was automatically gay and thus they responded to what they believed and disrespected this woman.

Wait so Aria lounge saying if u dress in men clothes but is a woman.. u will have to pay even though it's ladies free ? u hearing yourself. u sound stupid…

You can't charge a woman more money because she is dressed like a man. That implies you're going to charge men less if they dress like women and I'm pretty sure this is a can of worms they're disinclined to open.

If a brother shows up ‘elegantly casual’ in female clothes, are they going to find a way to charge him more for that? Or is it less they're charging? See, it makes no sense.

Aria Lounge's ‘weak excuse’ for talking and doing foolishness, is compounded here by the most ridiculous equivocation of institutionalised gender assumptions and prejudices.

Making the point that “the VVIP Syndrome” has been going on in public spaces for a long time, The Eternal Pantomime blog noted that “the thing about discrimination is that while it defeats some, it benefits others”:

And while clubs are free to implement their rules and guidelines on their admission policy, morally and ethically, if not legally, it is wrong to promote discrimination as a way of conducting business. Particularly in a multi-ethnic country.

Still, the blogger placed as much blame on the establishment as she did on the patrons:

Now herein is where the story gets interesting. All clubs and bars here have a discriminatory door fee that women never object to. Men have to pay, and women get in free by a particular time, or sometimes even all night long. No public fuss about this type of gender discrimination. […]

However, the hostess at the club chose to decide that Ms Gomes, despite being in obviously female, was not feminine. The hidden implications of Aria’s discrimination is that Ms Gomes is butch lesbian or at least appears to be butch lesbian. As such, the hostess chose to interpret her appearance as masculine. Ms Gomes insists that she is female, and identifies as female. And you know what, she is right. Aria doesn’t get to tell people what gender they identify as. Aria also doesn’t get to change its admission policy the spot. […] Which of course brings us full circle to discriminatory practices in business places here. And how happy we are to participate in them, until they stop benefitting us.

Since the incident, Facebook users led by the feminist group Womantra have been lending their support to a public call for action, asking women to come to the nightclub on Friday, December 18 — in “male” clothing — the protest the enterprise's dress code:

We will NOT STAND for body policing, gender policing, body shaming or discrimination OF ANY KIND. […]

COME OUT >>> ALL BUTCHED UP. Men feel free to wear a dress!

Naturally, satirical websites like The Late O'Clock News weighed in on the issue:

After making a young woman who was ‘dressed like a man’ pay the male price for entry into their club, a beautiful dog wearing a pink dress and a matching pair of pink high heel shoes was allowed to enter Aria Lounge free of charge last Friday night after meeting all the club’s dress code requirements. […]

‘First of all, she is a bitch. A real, actual, bitch. I thought this was a club for human beings only!’

Aria responded to the scandal, arguing that ‘ladies free’ does not only refer to human ladies. 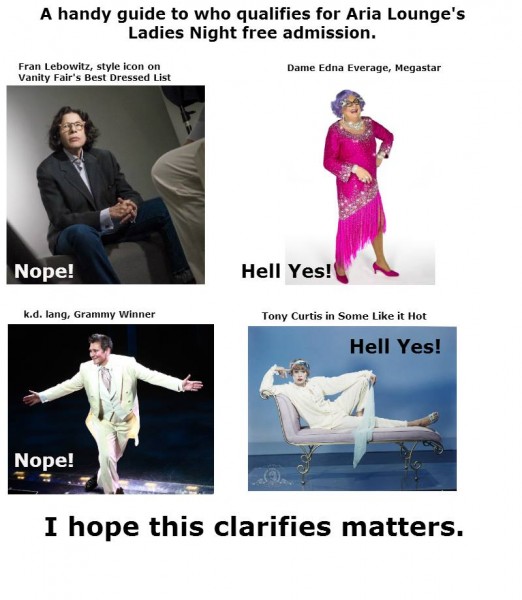 To Shannon Gomes, however, the situation remains as serious as ever:

You cannot pre-judge me if I fit the criteria except for your so called discriminatory policies on what a female should look like. There is no legality to that. […] I am not debating the way I dress, I am simply stating that if I meet the requirements of being listed as female and arrive on time you cannot deny me based on your bigotry, prejudice or intolerance.