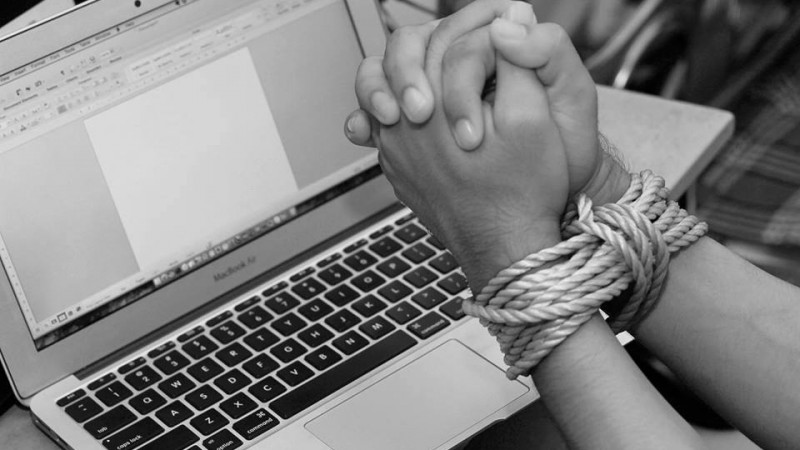 After an almost four-week ban on social messaging apps, Bangladesh government officials announced today that all the social media and communication apps are being unblocked. This announcement came after days of confusion and signs of a lack of coordination between different government agencies dealing with the ban.

On 18 November, 2015 Bangladesh Telecommunication Regulatory Commission ordered Internet service providers to block services including WhatsApp, Facebook, Messenger, Line, Tango and Google Hangouts (see Global Voices report). On the first day of the ban, what state Telecommunications Minister Tarana Halim described as a “misunderstanding” led to the entire Internet being blocked in Bangladesh for around 90 minutes, marking the first time the Internet was blocked in the country since its inception. According to the government, the ban stemmed from fears of public unrest following a Supreme Court ruling that upheld death sentences for two political figures convicted of genocide and rape during Bangladesh's 1971 war for independence from Pakistan.

Many Bangladeshis thus began using the Tor browser and encrypted messaging apps like Signal to circumvent the ban, particularly in an effort to visit Facebook, which is very popular in Bangladesh. The government then questioned the use of the circumvention tools and issued an empty threat to monitor these activities.

The ban was particularly harmful for small, Web-based entrepreneurs who depend on Facebook as a platform for marketing and outreach. Here, one e-commerce entrepreneur describes the crippling effects of the ban on his business: 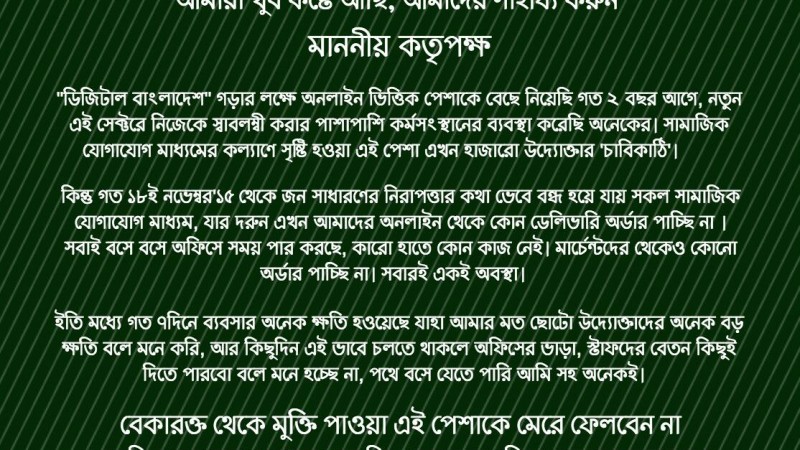 “We are getting no order and are waiting for customers. If this continues we will not be able to pay the salaries to the staff. We will have to close down. Please lift the ban and save us. We are in plight.”

On 10 December Bangladesh unblocked Facebook after meeting some Facebook representatives, while restrictions on WhatsApp, Viber and other communication apps stayed in place. According to reports, the government is seeking measures from Facebook to monitor or filter content that could viewed as provoking religious sentiment and conspiracies against the government. The company has given no official public response to their proposal, but has vowed to help, according to government representatives.

But after only three days, on 13 December, there were reports of a new ban on micro-blogging site Twitter, Microsoft's voice-over-IP service Skype, and communication app Imo. The report indicated that Bangladesh Telecommunication Regulatory Commission had sent a letter to the country’s mobile phone operators and telecom service providers asking them to suspend the services immediately.

Sounds like yet another regressive step by the government! Yes, security is important, but the government's versions of ‘security risk’ and ‘security measures’ must be well founded. So far, the concerned department, its officials, or its ministers have been able supply zero evidence to justify any of their words or actions involving the social networks, the last remaining free space. In an environment of systemic zero accountability and transparency, their words are no longer enough. In fact, they never were. It is important that the ‘rulers’ of Bangladesh acknowledge the fact that – none (I repeat ‘none’) of them inspire any credibility or trust, whether individually or collectively, in today's Bangladesh.

On Monday morning, Home Minister Asaduzzaman Khan Kamal told reporters that the Ministry did not issue any directive to block Twitter, Skype or Imo. However, the BTRC Chairman said that “it was nothing new” and “(the ban) is the continuation of the previous instruction.”

Users were visibly baffled by this new ban. Contradictory statements from authorities left many wondering what might be the reason behind it.

I demand we ban Candy Crush!

God alone knows why the Bangladesh Govt blocked Twitter for nearly 24 hours..anyway good to be back folks!

Do you think #Bangladesh ban on #Twitter means the government fears free-speech?

Now BTRC [Bangladesh Telecommunications Regulatory Commission] needs to explain why it has given instructions for blocking Skype if Govt. did not decide to do that. Is there any parallel govt? Or more dangerously, is there any ‘hacking’ in the communication channel between Govt. and BTRC?

On the afternoon of Monday 14 December 2015, Telecommunications Minister Tarana Halim revealed that “All the social communication media are being unblocked following a government order.” BTRC Chairman Shahjahan Mahmood confirmed that all will be open shortly. Only time will tell whether these services will remain accessible for Bangladeshis.