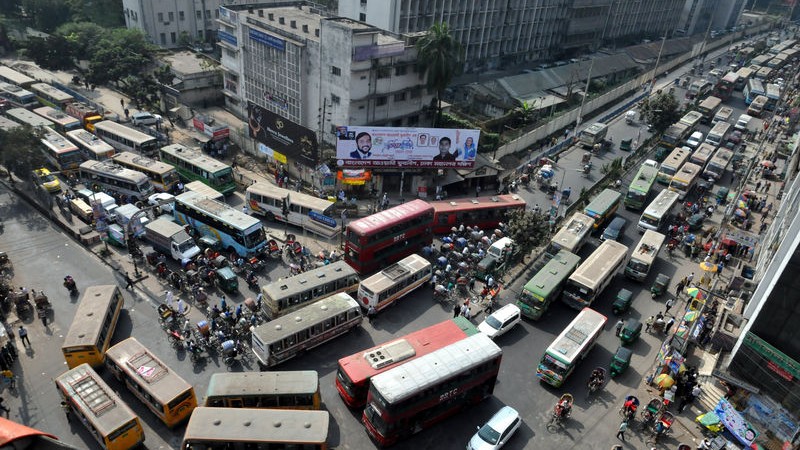 On November 18, the Bangladeshi government issued a ban on social messaging apps until further notice — service providers blocked WhatsApp, Facebook, Messenger, Line, Tango and Google Hangouts. The decision to block the sites came immediately after the Supreme Court upheld death penalty convictions against two former opposition leaders for their role in the 1971 Liberation War. Citing “security reasons” the government appears to be restricting communications in a bid to dampen potential protests in response to the ruling and subsequent execution of the two men. In the meantime, the ban has led to some interesting developments in use of social media and secure communication tools in Bangladesh.

On the day that the social messaging ban was imposed, what State Minister for Post and Telecommunications Tarana Halim described as a “misunderstanding” led to the entire Internet being blocked in Bangladesh for around 90 minutes, marking the first time the internet was blocked in the country. It appears that directives to block all social messaging apps became confused with the Internet itself.

Did the Govt of #Bangladesh / BTRC block Instagram too? I'm trying not to laugh. Such Digital Bangladesh… much censorship.

Blocking #SocialMedia during unrest is rather dangerous. There’s no good reason for #Bangladesh to block them in the name of ‘security’

The government had given some warning that they were prepared to stoop to the level of blocking certain sites just the week before, when Prime Minister Sheikh Hasina announced that popular online messaging and calling services WhatsApp and Viber would be blocked temporarily “if needed, in order to nab militants and prevent terrorist activities in the country”, according to the Dhaka Tribune.

So what has happened while these sites have been blocked?

More Bangladeshis are using the Tor browser or encrypted messaging apps like Signal. Bengali-language tutorials for these tools have been circulating heavily on Twitter.

Some unlikely advocates of secure messaging services have surfaced as well, including bdnews24, which recommended secure anonymous browser Tor to its 110,000 followers:

It looks as though people listened to them, too. From Tor's metrics site the number of users in Bangladesh has increased steeply since the blocking, from roughly 2000 to 12000 users in just a few days: 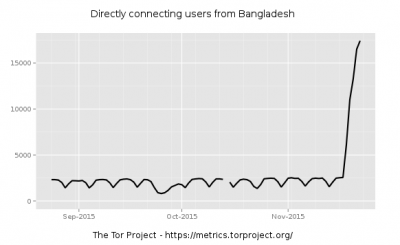 Even the ruling party in the government seems to be using alternative technologies in order to maintain their online presence. Despite being the ones who put the ban in place, the official page of the ruling Awami League party has been regularly updated: 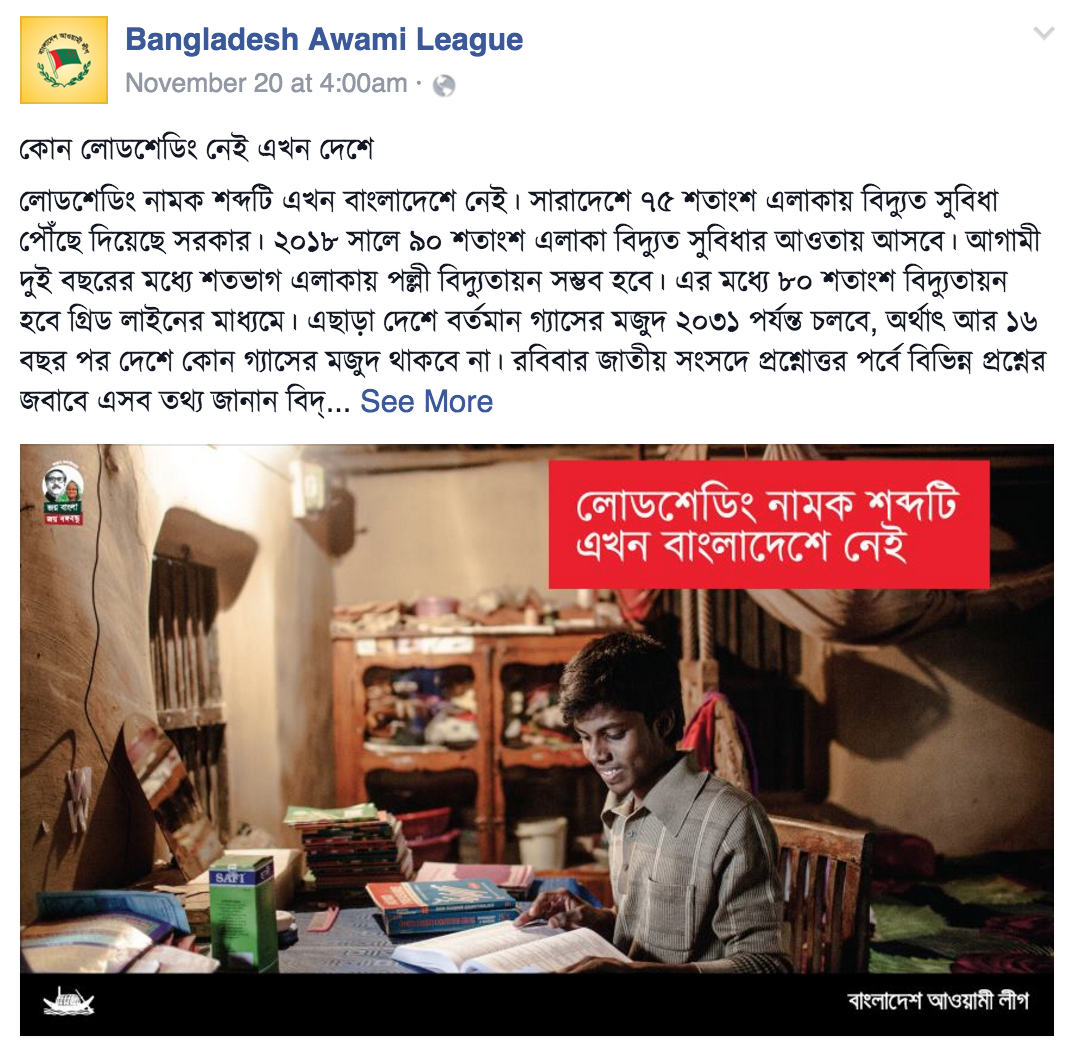 Last Saturday, Minister Tarana Halim urged users to bear with the temporary suffering for the sake of the country, reasoning that the move would ensure long-term security. She also defended this choice, saying:

The government has blocked Facebook and online messaging services WhatsApp and Viber until further notice on security grounds. The state authorities have been monitoring the people who are using those in alternative way.

Somewhat incredibly, even the Minister of ICT, Zunaid Ahmed Palak, updated his page during the blockade with this post about Digital Bangladesh. 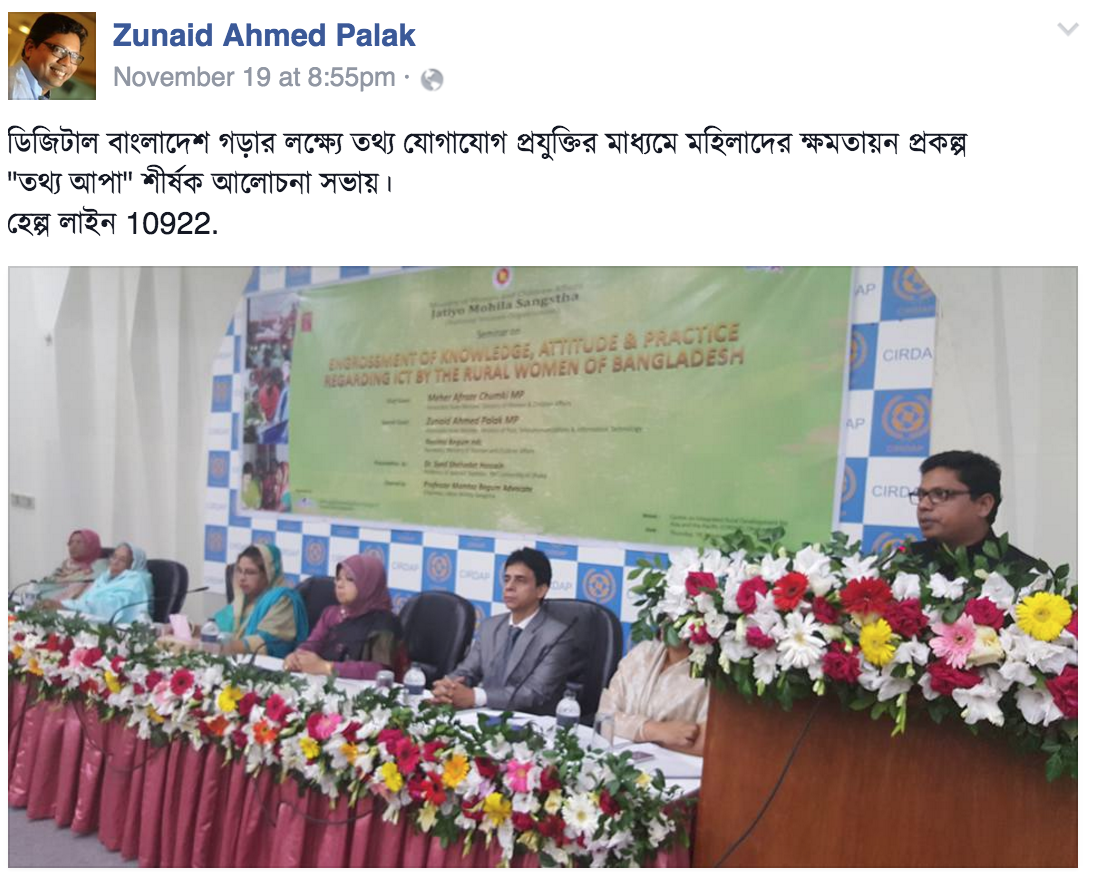 Screenshot from the ICT Ministers page

A discussion on “Tathya Apa” – a project on the empowerment of women through ICT to build Digital Bangladesh. Help Line 10922.

So it is not clear whether the government has blocked the Facebook portal or banned the use of Facebook altogether.

Is the #Bangladesh ban on #Facebook and other social-media tools effecting [sic] your social & business life?

Both executions took place on Saturday night, yet the ban seems still to be in place. We'll see how long this lasts. The government is already claiming that no unwanted incident took place due to curbs on social media. However, if the ban continues, it will hinder economic growth in the country, critics said.

If there's any silver lining we can draw from this gross misuse of power, perhaps it's that more people will starting using encrypted and secure technologies to communicate — ones that are much more difficult for the government to extinguish.