When in Doubt, Ask Yourself ‘What Would the Tanzanian President Do?’ 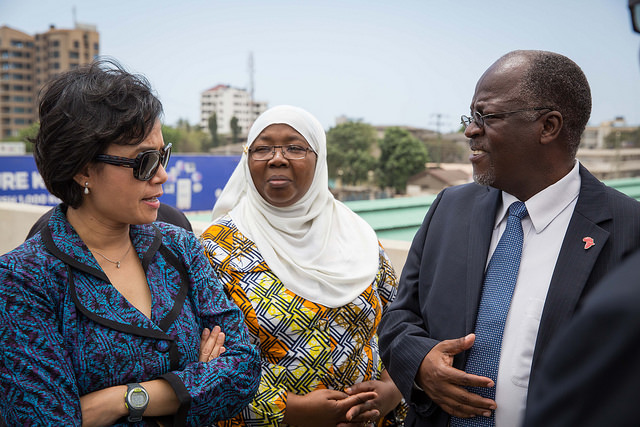 Tanzania's newly elected President, Dr. John Magufuli, nicknamed ‘the bulldozer’, has become a Twitter sensation across Africa following a series of radical cost-cutting measures he has introduced, which are rare in African countries. Immediately after his inauguration, Magufuli scrapped independence celebrations, choosing instead to spend money on sanitation, fighting cholera in affected areas and buying hospital beds and equipment.

Saying, “It is so shameful that we are spending huge amounts of money to celebrate 54 years of independence when our people are dying of cholera,” the president declared that on independence day, every household is required to participate in a nationwide clean-up campaign.

Mainland Tanzania, formerly Tanganyika, got independence from Britain on December 9, 1961.

Other cutbacks include the suspension of unnecessary foreign travel for government officials, sitting allowances for seminars and meetings including those of Member of Parliament, and lavish cocktail parties and dinners by public institutions. A state dinner for the official opening of the country's parliament, for example, was going to cost 300 million Tanzanian shillings. Magufuli slashed the budget to 25 million and ordered that the rest be taken to buy 300 hospital beds and mattresses and 600 bed sheets.

And when a group of 50 government officials was about to set off for a tour of Commonwealth countries on November 21, 2015, the president cut that list down to four people, saving the government 600 million shillings in tickets, accommodation and per diems.

Other austerity measures include a moratorium on foreign travel; when trips are necessary, they will be done economically — no more first-class tickets for government officials (with the exception of the President, Vice President, and Prime Minister), expensive hotels or cars. Allowances have also been stopped and the government plans to reclaim any non-operational state companies that were privatized.

The president has also prohibited public officials from sending out Christmas and New Year cards on the government's dime. The funds set aside for the printing of these cards will instead be used to pay off debts that government bodies owe for goods and services rendered. Another bold move was that, instead of sponsoring the annual World AIDS Day exhibition, the money budgeted for the event will be used to buy drugs for people infected with HIV.

Impressed by his performance, Twitter user Talkative Rocker has suggested that Magufuli's influence should be spread beyond Tanzania:

Indeed, Twitter users across Africa have been showing their appreciation for the austerity measures by using one of the funniest political hashtags on the continent, #WhatWouldMagufuliDo — in other words, before you make a decision, you should first ask yourself what the Tanzanian president would do in a similar situation.

When she wants some silverware jewelry but then you're smart so you start thinking: #WhatWouldMagufuliDo pic.twitter.com/etvFZy9iPx

I Wanted to buy an iPhone then thought #WhatWouldMagufuliDo and here i am.. pic.twitter.com/8eCD3Ymf52

When you call her out for a date and she comes with her girls then you ask yourself #WhatWouldMagufuliDo pic.twitter.com/jq1yNVHTpE

After my Iron stopped working before buying a new one i asked myself #WhatWouldMagufuliDo and Voila!! pic.twitter.com/v3PIhvAlOA

#WhatWouldMagufuliDo even informed one netizen's decision about attending a public mass that was delivered by a visiting Pope Francis in Nairobi, Kenya on Thursday, November 26:

Some of the Magufuli-inspired thriftiness was absolutely hilarious:

My girlfriend wanted money for eye-liner, I asked myself #WhatWouldMagufuliDo ; we used office marker pens instead pic.twitter.com/mdQL7OdRFr

I wanted to buy a cap but the I thought of #WhatWouldMagufuliDo pic.twitter.com/wIlsCqW7fx

Some netizens even addressed social and national issues:

Beggars in the street asking for money but #WhatWouldMagufuliDo pic.twitter.com/ZRCGWdT2CT

I seriously wanted to increase Uganda's defence budget but then tweeps asked me #WhatWouldMagufuliDo and I was like pic.twitter.com/Z617mEJoCo

Beneath the humor, however, Africans realise that there is much more to the hashtag:

As fun as #WhatWouldMagufuliDo is, it is also real expression of wider disillusion w/ rampant kleptocracy in #Africa https://t.co/P7qrmUodYV

We might be making fun of H.E Magufuli but deep down we know tht many African C’tries need “Magufuli” 4 president & MPs #WhatWouldMagufuliDo

Many Tanzanians hope that their new president will keep up the momentum during his next five years in office.