Haitians Take to the Streets to Protest Elections Results 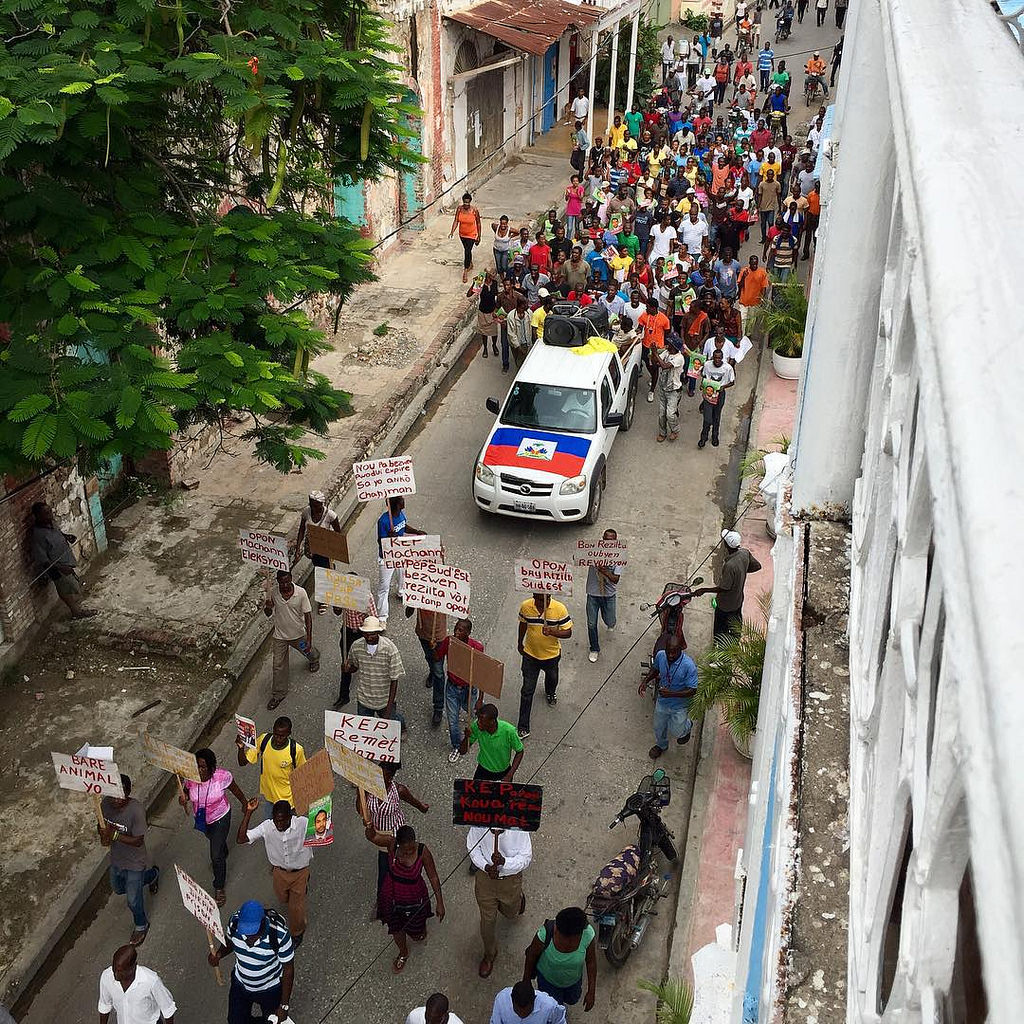 In the wake of Haiti's presidential elections on October 25, 2015 — the second such election since the devastating earthquake in 2010 — the country is mired in violent protests over the election results, which demonstrators say are fraudulent. Constitutionally, incumbent president Michel Martelly could not run in this election, and as no candidate received a majority vote in the first round, a runoff will be held on December 27.

Once the preliminary election results were announced by Haiti's Provisional Electoral Council (CEP), it was revealed that Martelly-backed Jovenel Moïse, who is currently campaigning in New York and Miami in an attempt to woo the Haitian diaspora, won 32.81% of the vote, while Jude Célestin, the candidate for former President René Préval's Unity (INITE) party, won 25.27%. It is interesting to note that after the country's 2010-2011 elections, there were also allegations of fraud and violent protests, which resulted in the CEP disqualifying Célestin from the runoff and replacing him with Martelly, who ended up winning against Mirlande Manigat.

This time, though, Célestin is prepared to put up a fight. Along with five other presidential candidates, he issued a statement calling the results “anti-democratic”. His supporters heeded the rallying cry and began street protests. The domino effect soon took hold — supporters of other candidates, including Jean-Charles Moïse who placed third in the polls and Maryse Narcisse, who represents former president Jean-Bertrand Aristide’s Fanmi Lavalas party, also began staging protests. Martelly's party has discounted accusations that it interfered in the electoral process, but there is enormous public pressure for the CEP to declare the elections null and void — both on the ground and online.

Images and videos of the protests were also being shared on Twitter:

#Haitians making their way through streets of Port-Au-Prince. pic.twitter.com/zisQ3KxbYY

There was also some discussion about the United States’ response to the situation:

Mon: What will US Amb to #Haiti have to say about exit polls saying only 6% voted for ruling party's Jovenel Moise? https://t.co/DA1DwJDIXu

Miami Herald correspondent Jacqueline Charles reported via her Twitter feed that members of the UN Stabilisation Mission in Haiti (MINUSTAH), with whom Haitians have a conflicted relationship, were out in their numbers on the streets:

.@MINUSTAH backup are also out on the streets to help @pnh_officiel with today's #Haiti protest. pic.twitter.com/BCvFMiiaqp

.@MINUSTAH police also out in the streets of Port-Au-Prince where thousands of protesters demonstrating. #Haiti pic.twitter.com/6ycPo6ImPE

Most Haitians want MINUSTAH troops off the island. Members have stood accused in the past of violence, sexual assault and being the source of the cholera outbreak that plagued Haiti just months after the country was sent reeling from the effects of the earthquake.

It is clear that Haitians are hoping that their voice in these elections will help to steer the country towards greater autonomy in their own affairs. The blog HaitiRozo shared its perspective on the electoral developments:

On Oct. 25, Haitian people went to the polls to elect a president, members for both chambers of the legislative branch and local officials. From Haiti to the last corner of the world, national and international officials praised Haitian voters for their patient, their motivation and their enthusiasm to use their votes to give their country a new leadership. There were also reports of fraud.

From the very beginning, it was clear we will have a second round to elect President Michel Joseph Martelly’s successor. I think now, we should let the candidates discuss those results before a special court. The way things happened in 2010 must not occur the same way in 2015 for the sake of a better Haiti. The international community should stay away from the discussions. Let Haitian people handle their business. Thank you.