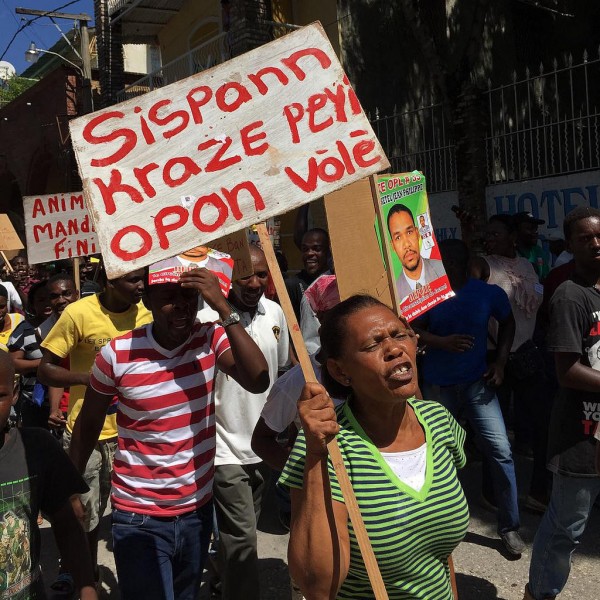 The presidential elections in Haiti are being dragged out for quite some time now.

When the legislative elections took place on August 9, 2015, many protestors took to the streets over their suspicions that the results were fraudulent; the unrest was followed by the first round of presidential elections on October 25 — but because the incumbent, Michel Martelly, was constitutionally barred from contesting this election and no other candidate won a majority vote during the first round, a runoff was supposed to be held on December 27. That election never happened.

Fast forward to 2016: oppositional presidential candidate Jude Celestin and government-backed rival candidate Jovenel Moïse, who came out on top in the first round of polling, were expected to go head-to-head on January 24. Surprisingly, Celestin announced on January 18 that he would not be participating in the planned election. He proceeded to call for a boycott. Soon afterwards, a group of eight (called the ‘G8′) Haitian opposition presidential candidates, did the same.

It was initially hoped that this runoff election would help revive citizens’ faith in the electoral process and restore civil order in one of the most unstable countries in the region — or at least that seems to be the most common narrative about the situation.

While rumors swirl that violence is the cause of the electoral delays, the blog Dady Chery was quick to assert:

The fight for Haiti is on. Since Haitians scuttled the fraudulent elections and started to make their own plans, the foreign occupation has become desperate to concoct a pseudo-Haitian solution to the electoral impasse. A disinformation campaign from mainstream news organs like the Associated Press, Reuters, The Guardian, and the Miami Herald is the vanguard of a colonial attempt to take Haiti.

As of right now, the only person running for Haiti's rigged election is Moïse, the founder of Agritrans, a private banana plantation that has allegedly been dispossessing about 800 peasants who were legally farming, by destroying houses and crops. The company then exports the bananas to Germany, despite the fact that Haiti does not have enough food to feed itself.

A report by Joshua Steckley and Bevery Bellogger fears that Moïse is only seizing land for his benefit:

A Moïse presidency would ensure that political decisions prioritize free trade and private enterprise over support for the destitute majority. This, in turn, would likely give a green light to massive land grabs that are planned or in process, while peasants working the land would be dispossessed.

Nevertheless, the politician has people standing by his side:

Supporters of @moisejovenel took to the streets today in Cap-Haitien and Port-au-Prince in support of him. #Haiti pic.twitter.com/3EDZrrdeHy

Twitter user Daniella Bien-Aime was concerned about the authenticity of it all:

@Jacquiecharles Is anyone wondering why all over sudden these people are protesting for him? Are they getting paid? @nytimes

To further complicate matters, opposition protesters began to clash with pro-Martelly ex-soldiers. These former members of the armed forces, known as the Forces Armees D'Haiti (FADH), supported Martelly based on his promises to restore the country's army.

My, my my. I wonder where they are going? Ex-Fadh. #Haiti pic.twitter.com/6zIvelP7V1

However, on February 7 — the last day of Martelly's term in office — he stepped down, leaving an interim government. He signed an agreement with two parliamentary leaders — Senator Jocelerme Privert and Lower House Leader Cholzer Chancy — which states that Prime Minister Evans Paul will run the country until an interim president can be picked by the legislature. In the event that an interim president is chosen, that person will serve for 120 days while new elections are organized. These new elections are to be held no later than April 24, with a new president to be inaugurated by May 14.

Without support from the international community to isolate the perpetrators of violence and corruption from the system, this – or any – brokered agreement is doomed for failure and Haiti will slip back into chaos for a decade or more. The OAS (Organization of American States) should actually leverage the Democratic Charter and conduct an investigation identifying the damaging actors and remove them from the process.

…while Twitter user Saheed-Caesar Badmus tweeted about what could have led to a plausible solution to begin with:

@Jacquiecharles If all these people protesting actually voted, there might have been a different outcome

Update: On the morning of Sunday February 14, the Haitian parliament chose Jocelerme Privert as the country's interim president.