WhatsApp Leads in Popularity, But Not Substance in Tanzanian Election Campaign 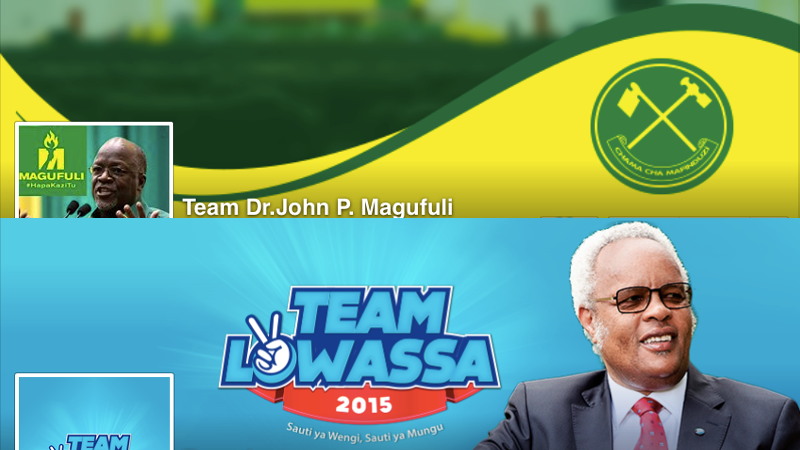 Tanzania is set to hold its General Election on October 25, 2015. The main presidential contenders are the popular former Prime Minister, Edward Lowassa, who defected from the ruling party in late July to join the main opposition bloc, and John Magufuli, the ruling Chama Cha Mapinduzi (CCM) candidate.

According to the Tanzania Communications Regulatory Authority (TCRA), the number of Internet users in Tanzania surpassed 11 million in 2014. To communicate with these connected voters, political parties and their supporters in the country are using not only traditional means, but also social media platforms such as Facebook, YouTube, WhatsApp, and Twitter.

Data in Tanzania on WhatsApp usage are scarce, but political operatives are flocking to the platform because it cuts across all demographics, unlike other social networks.
This is partly because WhatsApp is more easily accessible than either Facebook or Twitter to Tanzania’s 11 million internet users. “A lot of feature phones have WhatsApp pre-installed,” Maxence Melo, co-founder of Jamii Forums, one of Tanzania’s most popular online platforms, tells Quartz. “People do not have the technical know-how to install apps. So its easy [because] of these feature phones, Chinese phones, to have WhatsApp.”

Additional reasons for WhatsApp's popularity, Mohammed writes, include decreasing costs of mobile data: users can purchase 60MB of data per week for as little as Tshs2,000 ($1). Jamii Forums’ Melo estimates that this ease of access and low cost have boosted WhatsApp user numbers in Tanzania to as many as eight million, compared to Facebook's 2.5 million Tanzanian users and Twitter's 700,000 (according to local sources, as Twitter does not release country-specific data).

However, there is little substantial discussion or political debate happening on WhatsApp, Mohammed notes:

For the most part, what gets shared on WhatsApp are images and memes, as those are easily digestible for an electorate that is not looking for substance, analysts say.
“This is a social media driven election, where people want easy to consume content that doesn’t make us think a lot,” the [anonymous] digital media strategist says. “It’s like Arsenal versus Chelsea rather than about issues.”

The other social networks
WhatsApp may be a popular platform in Tanzania, but the two main political parties—Chadema, whose presidential candidate is supported by a coalition of four opposition parties Ukawa, and the ruling CCM—and their supporters also have a presence on other major social media platforms. Can more meaningful and substantial content perhaps be found there? And how do the two competing forces compare in their social media presence?

Both parties, Chadema and CCM, share videos on YouTube of campaign rallies and other election-related events around the country.

Supporters of CCM’s candidate John Magufuli have set up Team Dr. John Magufuli with 8,076 likes, while his party's Facebook page has 177,572 likes.

Chadema 2015 vs CCM 2015 is a popular closed Facebook group housing debates for supporters of both parties with 52,445 likes.