Yemen's Heritage, a Victim of War A captivating view of Old Sana'a by photographer Ameen Alghabri

Yemen, one of the oldest centers of civilization in the Arab World and also the poorest Arab country, has been pounded by airstrikes led by its rich neighbour Saudi Arabia for almost three months. The operation began after rebel group Houthis took over the capital Sana'a, causing President Abdu Rabu Mansour Hadi to flee to the port city of Aden and shortly after seek refuge in the Saudi capital, Riyadh.

Over 2,500 people have been killed and 11,000 injured since the war started on March 25. One million people have been internally displaced in Yemen and 21.1 million — 80 per cent of the population — are in need of humanitarian assistance, according to the latest report by the UN Office for the Coordination of Humanitarian Affairs (UNOCHA). Yet the country's residents have not been the only victim of this war. Yemen's heritage has also suffered.

On May 9, Saudi jets targeted the Mosque of Imam al-Hadi in the city of Saada, a Houthi stronghold. The mosque is the third oldest in Yemen and was built 1,200 years ago.

Jamila Hanan, a humanitarian activist, shared photographs of the ancient and beautiful mosque in her tweet:

Reading about beautiful Al-Hadi Mosque in #Saada #Yemen built in 9th century. Struggling to grasp that it was bombed. pic.twitter.com/5x5qSL3CQd

On May 11, the old city of Sana’a, Yemen’s capital and one of the oldest inhabited cities in the world, was heavily bombed overnight, causing severe damage to many of its historic buildings. Other areas damaged by airstrikes were the old city of Saada and the archaeological site of the pre-Islamic walled city of Baraqish, causing UNESCO Director-General to issue a statement calling on all parties to protect Yemen’s cultural heritage. Ms. Irina Bokova said:

I am particularly distressed by the news concerning air strikes on heavily populated areas such as the cities of Sana’a and Saa’dah. In addition to causing terrible human suffering, these attacks are destroying Yemen’s unique cultural heritage, which is the repository of people’s identity, history and memory and an exceptional testimony to the achievements of the Islamic Civilization…I call on all parties to refrain from any military use or targeting of cultural heritage sites and monuments, in respect of their obligations under international treaties

On May 24, two Saudi airstrikes targeted the ancient Al-Shareef Citadel in the city of Bajel in Hodeida province.

On June 4, Dar-al-Hajar (Rock Palace), perched atop a rock in Wadi Dhar, north of Sana'a built by Imam Mansur in 1786 AD, was reportedly targeted by Saudi airstrikes.

Dar al-Ahajer was hit today by KSA jets. Also the country's hertiage and history are under Saudi fires. #Yemen pic.twitter.com/ZL4hrP49bZ

On May 25, Dhamar's Regional Museum, hosting thousands of artifacts from the Himyarite civilisation, was completely destroyed by Saudi airstrikes.

On June 1, the ancient Great Mareb Dam, described as “one of the grandest engineering marvels of the ancient world” and one of the most important ancient sites in Yemen dating back to the ancient Queen of Sheba, was damaged by Saudi airstrikes which hit the better-preserved northern sluice. The original dam was first built in the 8th century BC, in the city of Marib which was once the capital of the kingdom of Sheba (Saba).

Yemen Post Newspaper shared a before and after photograph of the Great Dam:

BEFORE & AFTER… Photo of #Yemen historical tourist site “Mareb Dam” that was hit by #Saudi airstrike. #اليمن pic.twitter.com/ucRmWp7tHP

On June 5, the beautiful Al-Qahera (Cairo) Castle overlooking the city of Taiz was destroyed by Saudi airstrikes. Houthi and ousted president Ali Abdulla Saleh's forces were reportedly using it as a military position to shell their opponents in the city.

Yemen Post News tweeted photographs of the castle as it was being hit and before and after photographs showing the damage.

The destruction of all these heritage sites by Saudi airstrikes across Yemen seemed to go unnoticed until the morning of June 12, when a Saudi missile hit the Qassimi neighbourhood in Old Sana'a, listed as a UNESCO World Heritage site and boasting 9,000 mud houses, some of which are built before the 11th century. The world was outraged by the news of the destruction of this 3,000-year-old heritage by Saudi airstrikes, but mostly Yemenis were devastated.

@CNN ‘s late night report on the destruction in the Old City of #Sanaa #Yemen https://t.co/VMF3m5NKVA

The director general of UNESCO once more condemned and deplored the attack on Old Sana'a. In a statement she said:

I reiterate my call to all parties to respect and protect cultural heritage in Yemen. This heritage bears the soul of the Yemeni people, it is a symbol of a millennial history of knowledge and it belongs to all humankind.

Ahmed Al-Sayaghi shared photographs of the Qassemi neighbourhood in Old Sana'a before and after the missile attack, showing the destroyed houses.

OLD #SANAA CITY Before & after the airstrikes 😔 #Yemen pic.twitter.com/DUrMofYEF3

Abubakr Al-Samahi eloquently expressed the feeling of many Yemenis in his piece in al-Araby al-Jadeed:

We have become accustomed to seeing the destruction of Yemen.
Yet, when the places destroyed are buildings you remember, streets you walked down and sights you loved, the pill is harder to swallow…Of course, the lives of the thousands killed in Yemen's war are more important. But I, and many other Yemenis, feel a deep sense of pain when we see the destruction of our heritage, places that we want to share with the world.

It took our ancestors hundreds, if not thousands of years to build our cities in the sands and our palaces in the mountains. All it takes is a moment for them to be destroyed.

Ali Almurtada drew a comparison to explain the feeling of Yemeni pain.

If you find it hard to understand what Old Sanaa represents to Yemenis, imagine the pyramids in #Egypt being destroyed. #Yemen

Yemen perhaps is a poor country economically, but is very rich culturally with its heritage and history, a source of pride to Yemenis and a painful loss to witness its destruction. It seems Saudi Arabia's “Operation Restoring Hope” has turned into “Operation Destroy History”. Today, Yemenis cry over human and stone, life and history, which are destroyed in the war by all parties, ousted president Saleh and Houthi forces and mostly the Saudi-led coalition. 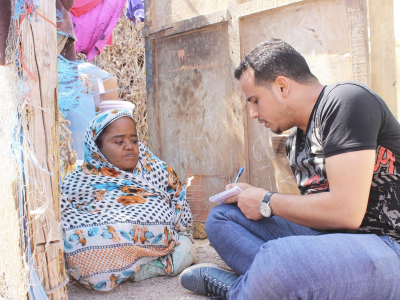 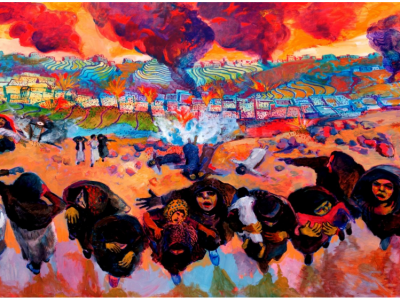