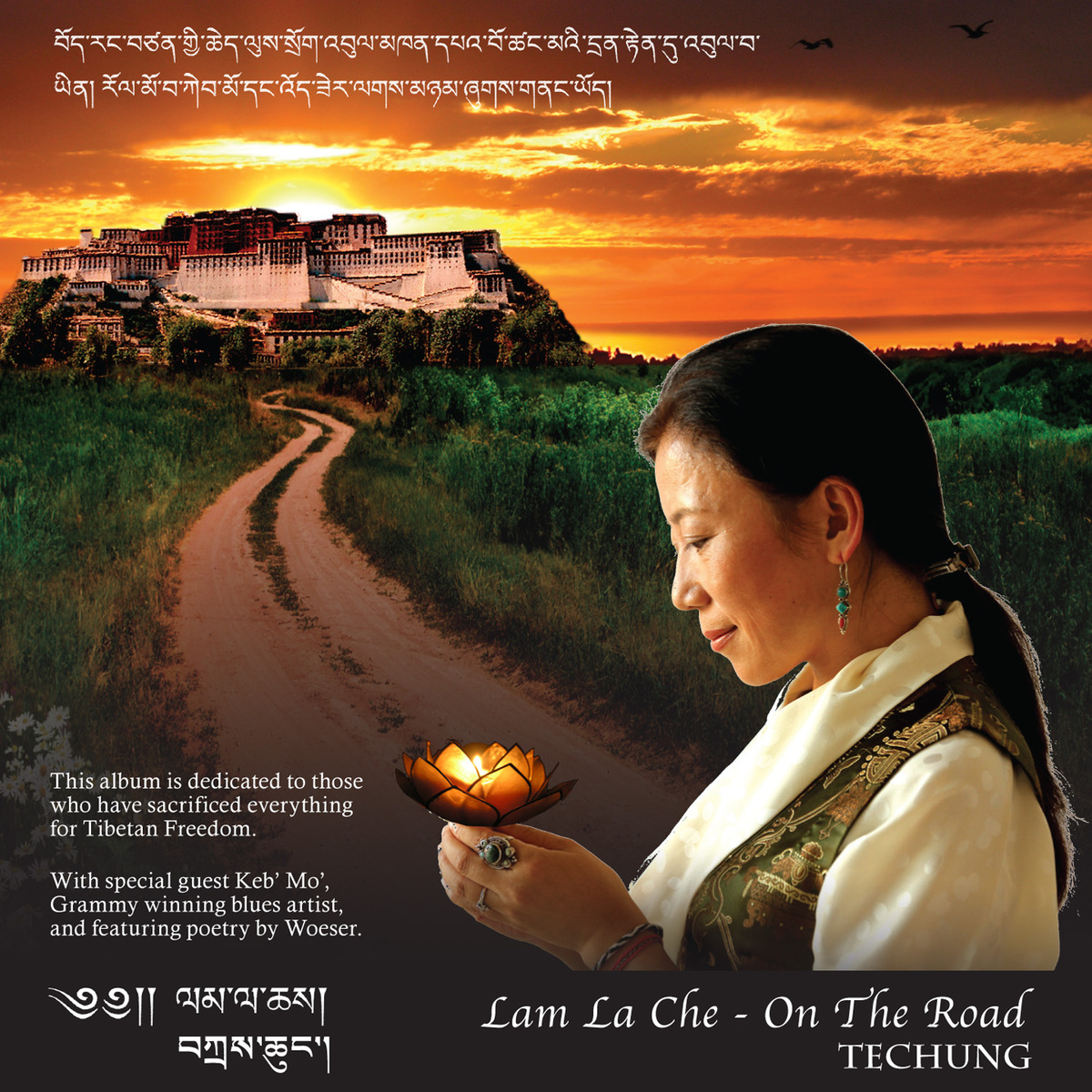 Five years in the making, solely through online communication, a unique music collaboration between a Tibetan musician in exile and a Tibetan poet inside Tibet, was finally released internationally in July 2013.

The first collaboration of its kind, the song Lam La Che is an example of how the internet allows Tibetans in exile and Tibetans inside Tibet to reach across borders to not only communicate, but also collaborate.

Tibetan musicians making pro-Tibetan art inside Tibet risk censorship and imprisonment;for their work. Tibetans diaspora musicians can produce art freely but know that their work might not reach Tibetans living under Chinese control.

By communicating through the internet, Tibetan exile musician Techung and internal Tibetan blogger Woeser were able to create a song that reaches across borders while calling attention to them. This post digs deeper into Lam La Che, Techung and Woeser's story.

When Tibetan writer, poet and blogger Tsering Woeser (known as Woeser) saw photos and video footage online of Tibetan diaspora musician Techung (Tashi Sharzur) performing at the Tibet Freedom Concert in Taipei in December 2008, she was deeply moved. 2008 had been a turbulent year for Tibet – a wide-scale uprising against Chinese rule started on March 10 and swept across the entire country. The military crackdown that followed kept Tibet under tight control for the rest of the year, and Beijing-based Woeser used her blog to document what was taking place. The concert inspired Woeser to reach out to Techung about starting a collaboration between what she refers to as “internal” and “external” Tibet.

The concert coincided with the 60th anniversary of the Universal Declaration of Human Rights and Techung’s voice came across as a beacon of signal hope and peace. In a post about 2008, Woeser wrote, “Tibetans, regardless of whether they were inside or outside Tibet, could hear voices from the heart – Tibetan people live together in happiness and sorrow.” 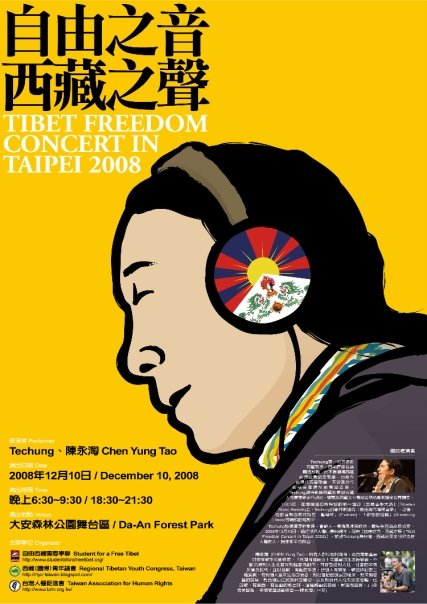 A collaboration between an “internal” and “external” Tibetan had the potential to symbolically bridge the borders separating Tibetans from their diaspora family.

“I had written several song lyrics, one of them being “On the Road,” which I wrote many years ago in Lhasa, [which] expresses longing for His Holiness the Dalai Lama.” Woeser wrote in an email interview. “I was thinking that if Techung could add music to it and perform it, that would be the perfect dedication.”

Techung and Woeser could not meet in person, which presented certain challenges for the project. Politically active exile Tibetans like Techung, are often denied the Chinese visa that they would need in order to visit Tibet. As an activist blogger, Woeser has been routinely refused a passport by the Chinese government. In March 2013, Woeser was honoured with an award from the US State Department on the occasion of International Women’s Day but, as relayed to AP, she was “unable to attend because her application last year for a passport was denied by police — and that she was told the reason was that she's deemed a threat to state security, presumably because of her activism.”

Artists, musicians, and bloggers who support Tibetan nationalism face high risks. Music can be pulled from distribution, and musicians can face years in prison. Tibetan singers Lolo, Tenzin, and Gebey have all been sent to prison for making music that celebrates Tibet. Music made by exile musicians such as Techung is frequently censored once it reaches Tibet.

After releasing an openly political debut album which was banned in Tibet, Techung has attempted to tone down his language, imitating the self-censorship practiced by internal Tibetan artists in order to increase the chances that his music will be heard inside Tibet. For example, instead of using the politically loaded Tibetan word “Bod” for Tibet, singers would sing Kangjong (Land of Snows).

Woeser, on the other hand, has been directly censored many times. Her writing has cost Woeser her job, and her blogs have been shut down so many times that she is only currently able to maintain her blog by hosting it on overseas servers.

“It had just never happened before that someone had collaborated with a Tibetan inside Tibet or inside China before,” said Techung.

“In a sense, Techung is a symbol of exile Tibet…” wrote Woeser. “As I have written in the past, music is like the wings of a bird that can fly over man-made borders. I wanted to work with Techung to break down some kind of historical or practical obstacles.”

“It was a surprise and a big honour when Woeser contacted us,” said Techung in a Skype interview from USA. Below are the screenshots of their communications: 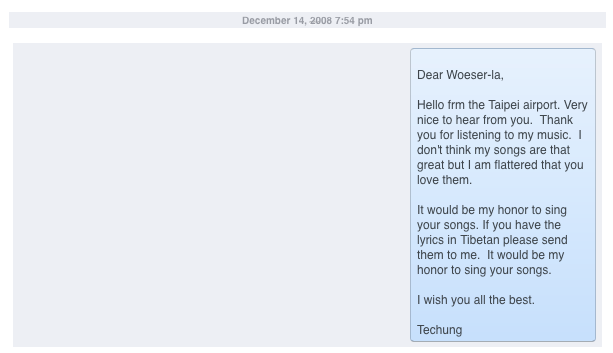 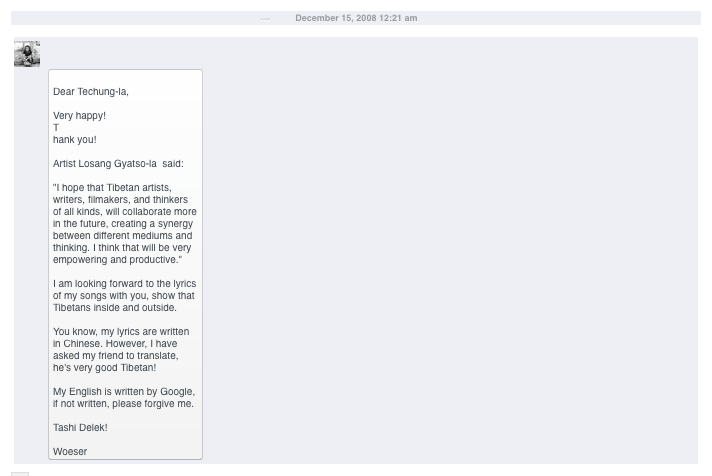 Born and raised in Tibet and China, Woeser can only write in Chinese. Techung, born and raised in India and living in USA, feels more comfortable writing in English. Both had heard of each other but had never spoken until Woeser wrote to Techung on Facebook, using Google Translate to translate her message from Chinese into English.

“There was a big language barrier,” said Woeser. “There wasn’t all that much contact between us.”

“Collaboration is quite a new thing for all Tibetan artists and musicians, both inside Tibet and in exile,” said Techung. “We don’t quite know how these things work yet. Woeser wrote the lyrics in Chinese and someone else translated them into Tibetan. She sent me two or three poems to set to music and eventually we chose “Lam La Che.” I sent some changes to the lyrics in Tibetan back to her… We had some back and forth a few times with various suggestions… We never actually spoke to each other in person – everything was done online.”

“The song itself was so poetic [that writing] the music felt very easy and spontaneous, like it was meant to happen,” said Techung.

Although Techung was the first exile Tibetan Woeser had collaborated with in such a direct way, she has worked with exile Tibetans before. High Peaks Pure Earth had previously translated her blogposts into English, and exile Tibetan scholar Tsering Shakya had written a preface to one of Woeser’s books. Woeser had once written an essay inspired by Tibetan exile painter Losang Gyatso’s series Signs From Tibet, which Gyatso read aloud at the exhibition’s opening.

So long as internet access is not censored, Woeser expresses optimism about further possibilities for collaboration.

Other Tibetans are also using the internet to bridge geographical gaps

With advances in technology, Tibetans inside and outside Tibet are finding new ways to communicate and collaborate. The Tara Café Project’s Shining Spirit recording and film project, created in 2006, is an early example of musical collaboration amongst a Tibetan family who are separated, with some living in Amdo, Tibet and others living in exile in Canada. The short film shows how through recordings and internet the family were able to record their own version of traditional Tibetan song  “Aku Pema.”

Nowadays, Tibetans outside and inside Tibet are even writing songs specifically addressed to each other. The young Tibetan rapper “Shapaley” (Karma Norbu) from Switzerland released a music video in 2011 called “Made in Tibet,” with the lyrics, “Brothers and sisters, we don't know if you can hear us, but we hope you'll receive this message, don’t worry, we’re all doing fine, […] Although we’re far away from you, our thoughts are with you.”

Bantsang Lobsang, a musician living inside Tibet, included a message for all Tibetans on his most recent album. Lobsang directly addresses the camera and says, “I wish for Tibetans of the Land of Snows, home and abroad, to be reunited.”

Keeping up with Tibetans around the world

Despite being separated by geographical and political factors, Tibetans in exile keep up with work created by Tibetans inside Tibet, and vice versa.

Fans have approached Techung a number of times to tell him that musicians inside Tibet were following the diaspora music scene and were inspired by the music being made by exile Tibetans.

In turn, Techung admires the tenacity of internal Tibetans, “The Tibetan musicians in Tibet are way ahead of those of us in exile! I appreciate how poetic they are. They are utilising the art form to communicate messages and [keep] culture alive – people really look up to them. At the same time, the risk is so high and they have to be so careful.”

Techung’s is a fan of “internal” Tibetan musicians such as Tsewang Lhamo and Yadong. “Through them, a whole sense of our culture and identity is carried; this is so important. My message to them is just to keep doing the work they are doing and we’ll do what we can from our side. One day hopefully we won’t have to worry about the political issues and risks, and Tibetan musicians and artists, including Woeser, will enjoy the freedom to be able to travel and we will be able to meet in person and collaborate on music.”

Woeser’s favorite Tibetan exile singers include Techung, Shapaley, Phurbu T Namgyal and Kelsang Chukie Tethong. Her message to exile Tibetan musicians echoed Techung’s as she wrote, “I really like the music of exile Tibetan musicians and have written articles about them. I hope that one day, Tibetans inside and outside Tibet will be able to work together and express our common concern about Tibet’s future.”

You can support Techung’s new album here, it also include a cover of a song by young Tibetan singer Lolo, who has been imprisoned for his music.

This story was commissioned by Freemuse, the leading defender of musicians worldwide, and Global Voices for Artsfreedom.org. The article may be republished by non-commercial media, crediting the author Dechen Pemba, Freemuse and Global Voices and linking to the origin.