As workers began cutting down trees over the first weekend in August in downtown Skopje Bristol Park to clear a portion of the land for the construction of the Macedonian National Broadcast Council's new baroque-style building, citizens of Macedonia's capital gathered to protest. Like in nearby Turkey and Serbia, the protest that seemed to revolve around a few trees brought up other legislative and political questions in the country.

Skopje authorities secured a perimeter of some 300 meters around the site that cars were not allowed to pass as workmen armed with saws began to do their work on Saturday, August 3, 2013, due to previous alerts and smaller protests by activists. While some protesters managed to gather in the park, citizens living nearby were reportedly not allowed to leave their buildings, which authorities explained was a sort of safety precaution.

An article in Libertas, titled “About the Massacre at Bristol” describes the details and includes pictures of the morning in question, as well as specifically points out some of the alleged illegalities of the act. Author Nicholas Naumoski lists:

Access to cars was not allowed in a radius of 300 meters.

People who wanted to join the protest by way of the City Wall were stopped by police and detained for searches. In the end they were released.

Neither the police nor the loggers had any documents (work orders, permission or resolution) for the cutting of the trees. In contrast, the Council for the Center Municipality, during its first session, accepted Freedom Square's initiative to preserve the parks around Bristol, expressing political will for their survival and recovery. The provided document which included the seal of the municipality and signature of the Mayor and President of the Council did not mean anything to the [police] commander because he received “verbal” orders.

The next day on Sunday, netizens took to social networks to organize further protests at Bristol and report [mk] on the gathering of protesters at the site. Trees being cut down at the park in Skopje; photo by @blagdusha on Twitter, used with permission.

Although the protests were much smaller than expected, many Macedonians on social media sites have compared them to Taksim Square and Gezi Park. Twitter user Gotze wrote:

#Bristol is far from Taksim, and we from Turkish protesters… on the day when there should have been the largest response barely 250-300 people showed up…

The protest brought together some 300 people, while police barricades were set up around the location again. Macedonian Plus Info site provides a photo gallery [mk] of the barricades and protests from Sunday, while Libertas provides photos and video [mk] of the initial cutting at four a.m., strangely, on the night between Saturday and Sunday, calling the midnight act “cowardly”. Some social media users noted that the protests were indeed peaceful, that there was little police presence at the protest site itself and that police forces present mostly remained on the sidelines [mk].

The park at Bristol is seen by Skopje citizens as one of the favorite landmarks of the city's center. Although some were disappointed by the low turnout on a Sunday protest, many are saying that this is the beginning of something bigger as Macedonians seem fed up of such arbitrary decisions by government institutions. The trees in the park, however, have been cleared and construction of the new National Broadcasting Council building is now underway. Construction site where the trees at Bristol Park used to stand; photo by @blagdusha on Twitter, used with permission. 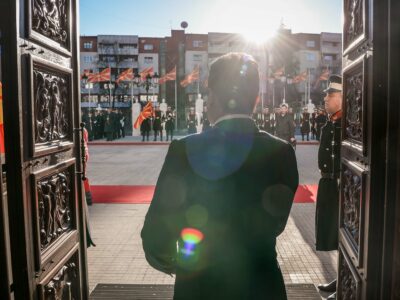 North Macedonia's Zoran Zaev, the prime minister who ‘has done the most to serve his country’ 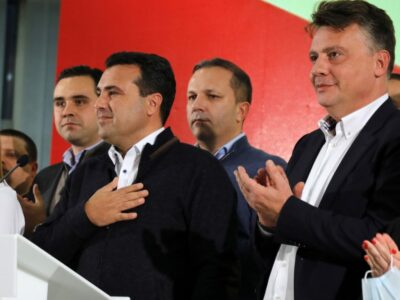