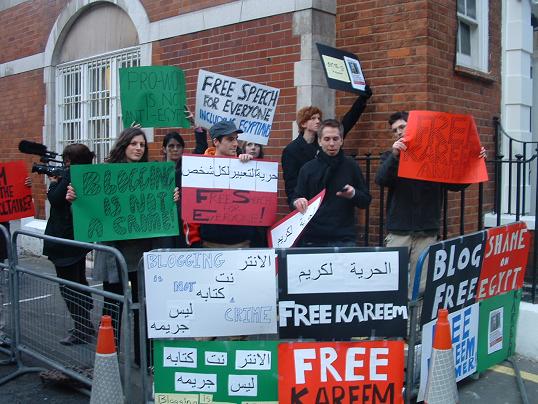 A call has gone out for a second round of worldwide rallies to pressure the Egyptian government to free detained blogger Abdulkareem Nabeel Sulaiman, a 22-year-old former Al Azhar University student, who has been sentenced to four years in prison for articles he wrote on the Internet.

On February 22, an Alexandria court found him guilty of insulting both Islam and Egyptian President Hosni Mubarak. The ruling was upheld on March 12, sending shockwaves around the international blogosphere as well as calls by human rights activists for the immediate release of the jailed blogger. There were also calls for a more severe sentence to ensure that other bloggers don't follow in Kareem's footsteps. For instance, a civil claim filed by the eleven lawyers who want to fine Kareem for ‘insulting Islam’ is still pending.

But this will not dampen the spirits of campaigners fighting to free Kareem.

“The Free Kareem Coalition has been contacting individuals around the world who have expressed interest in holding rallies next month at Egyptian Embassies and Consulates in their country of residence.
We believe that all freedom-loving individuals need to make their voices heard with the rest of the world. The date of the worldwide demonstrations has been tentatively set to Friday, April 27, 2007.
Any form of support from you, be it your presence in the rally, promoting it, or organizing one in your area, would be a great boost to our cause to free Kareem Amer,” wrote his supporters here.

A lot of you may be wondering about what Kareem wrote. What is this furore all about? Kareem's articles, which have led to his ordeal, are found here. His supporters are however quick to point:

“DISCLAIMER: The creators of the Free Kareem campaign would like to stress the fact that they do not agree with the contents of this article,” regarding this article in particular.