Seawater intrusion has already been a serious problem in Chittagong 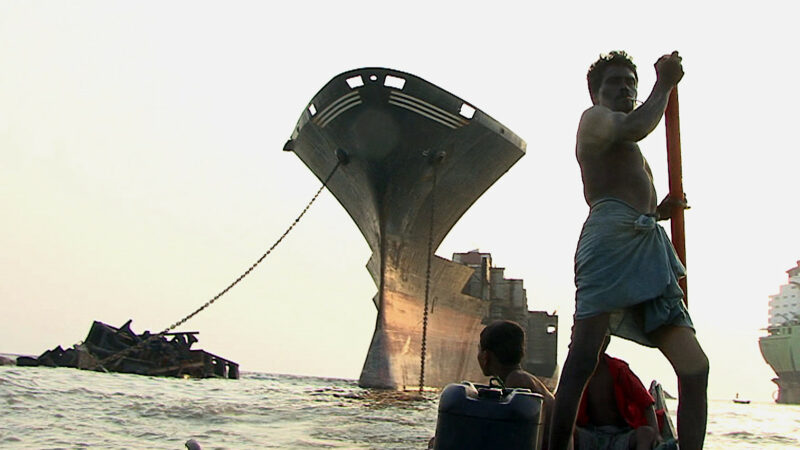 The ship breaking industry in Chittagong is one of the major polluters of water resources. Image via Flickr by Stéphane M. Grueso. CC BY-SA 2.0.

This is the second part of the article that was originally written by Shamsuddin Illius and published by Unbias The News as part of the “Sinking Cities” series. An edited version is republished in two parts by Global Voices as part of a content-sharing agreement. Continued from part 1.

With homes swallowed by floodwaters and river erosion, migrants from different parts of Bangladesh have opted to move to the cities of Dhaka and Chittagong for ‘safer ground.’ But these options for ‘safer’ ground are also sinking.

Many survivors of extreme weather events and disasters end up in the country’s second-largest city of Chittagong. Nur Nahar Begum lives with her four children and husband in informal dwellings next to the Karnaphuli River. She was forced to migrate to the city from Laxmipur, a low-lying southeast coastal district after she lost her home in 2019 to river erosion.

Chittagong has been identified as one of the coastal cities in Asia subsiding at a rate almost 10 times faster than the sea level is rising. Similar to Manila in the Philippines, it has sunk by as much as 20 mm per year over a 5-year period, from 2015 to 2020.

The city, often touted as the country’s commercial capital, also has a groundwater extraction problem. Before 2010, the Chittagong Water Supply and Sewage Authority (CWASA) was able to supply only 190 million litres per day (MLD), not even half the city’s required water supply of 500 MLD. Out of this 190 MLD, 100 MLD was taken from underground aquifers.

But CWASA chief engineer Maksud Alam said they have tried to switch to surface water through various projects. Since 2017, 92 percent of the city’s water needs have been sourced from surface water. “We are trying to [be] solely dependent on surface water, realizing the problems,” he said in an interview with Unbias The News.

The transition has not been smooth, however. The country’s commercial hub, home to over 1,200 major industries such as steel and cement, continues to grapple with diminishing sources of water overall. Factories and enterprises found it difficult to get water even after “drilling 1,500 – 2,000 feet into the ground.” As a result, other companies like steel manufacturing company GPH Ispat Ltd have resorted to constructing their own dams to meet the water demand of both their operations and employees. While this was a temporary remedy, it has affected the capacity of ethnic minorities to get their own water in the area, as reported by The Daily Star.

The thirsty industries have been accused of indiscriminately extracting groundwater as other sources such as the River Kharnapuli have become more saline. People have protested against this, saying the continued extraction of private companies has cut their own supply of water, which they use for irrigation and drinking.

Professor Muhammad Rashidul Hasan, head of the urban and regional planning department at Chittagong University of Engineering and Technology told Unbias The News:

If industries continue to extract water in such a manner, there will be a huge catastrophe due to land subsiding. Already in many adjacent areas, agricultural lands are not getting water because of the extraction of the industries.

Sans any intervention, this competition over groundwater between industries and Chittagong’s residents is only expected to worsen with the planned establishment of the largest industrial zone in the country, the Bangabandhu Sheikh Mujib Shilpa Nagar (BSMSN). “More than 580 industries, including garments, automobiles, food, and the chemical industry, are expected to be established there,” a study conducted by Prof. Mahfuzur Khan from the University of Dhaka and other experts noted. “To run this industrial site every day, approximately 839 million litres/day of freshwater will be required by 2040, which will be collected from nearby surface water sources and groundwater,” it added.

To try to mitigate the sourcing of water through extraction, however, the government is looking into a project that will bring 900 MLD from the River Meghna to the planned industrial zone. This move is critical. As Khan et al’s study noted, aside from the industrial sector and the city’s residents fighting over scarce water, having companies rely massively on groundwater extraction poses a greater risk of seawater intrusion and land subsidence.

As it is, seawater intrusion has already been a serious problem in Chittagong. The findings of this study published in the journal Earth showed that most commuters lived on the coast, which is at the most 5 meters above sea level. Over the years they have tried to deal with seawater intrusion by barricading the entrances, elevating their floors, and raising the roads.

Agrabad, home to both local and international businesses and financial institutions, as well as to Chittagong’s wealthy families, is not spared from this problem. “Agrabad CDA Residential Area was the first and posh residential area in Chittagong. People came from all over Chittagong to see the modern residential area built by CDA [Chittagong Development Authority] in the heart of the Bangladesh commercial city in the 1960s,” said Architect-Environmental Planner Reza Kaiser, former chief city planner of Chittagong City Corporation (CCC). Kaiser added:

All the ground floor of this posh residential area is now almost abandoned due to its constant inundation by saline water whenever there are high tides in the Bay of Bengal.

Kaiser had identified Agrabad as a high-risk area for flooding in his book ‘Climate change and its consequences on Chattogram (Chittagong) city of Bangladesh.’ CDA Chief Engineer Kazi Hasan Bin Shams shared: “We are struggling with the situation. We elevated roads by three feet in 2019 spending millions of money but the tidal surge won again as it flooded the whole area this year. This is due to increasing sea level rise and some unplanned development.”

The search for alternatives

CWASA has developed four projects in 2009, 2011, 2013 and 2015, with the Bhandal-Juri water Supply Project scheduled to be completed this year. All in all, CWASA was able to increase the water capacity of Chittagong from 190 MLD to 500 MLD in a decade. “We hope soon we will go into the operation of the Bhandal-Juri project that will produce 45 MLD, and we will be turning to 100 percent surface water. However, we are facing some difficulties in some plants due to increasing salinity,” said AKM Fazullah, managing director of CWASA. CWASA is treating the water of the Halda River and Karnaphuli River. DWASA is treating water from the Shitalakhya and Padma Rivers.

Prior to this, CWASA implemented three water treatment projects costing roughly USD 655 million from three foreign lenders — Japan International Cooperation Agency (Jica), the World Bank, and the Exim Bank of South Korea. CWASA has to start their repayment in 2023 and has to pay around USD 29 million annually. DWASA’s debt to the foreign lenders, on the other hand, is roughly USD 2 billion and every year they have to repay around BDT 400 crore to BDT 600 crore or USD 47 million to USD 71 million.

CWASA has reportedly passed the burden of paying these debts to the consumers through water tariffs, even if some of the projects did not allegedly deliver the intended results.

Bangladesh is increasing the climate allocation in its national budget every year. The government created a USD 400 million Climate Change Trust Fund (CCTF) from its own resources for financing adaptation and mitigation projects. The CCTF covered a total of 732 projects across the country since 2010, worth around USD 297 million. Among them, a total of 377 projects have been completed, costing around USD 202 million, while 355 projects worth USD 95 million are in the process of implementation.

Bangladesh has also adopted a visionary plan called Delta Plan 2100, which aims to reduce vulnerability to natural disasters and build resilience to climate change and other delta challenges. It identified 34 projects as climate-relevant and also determined that an additional 1.7 per cent of GDP will be required each year to adapt to climate change and other environmental impacts. According to the Climate Budget Report (2021–2022), over the next couple of decades, USD 37 billion is needed to implement the first phase of this plan.

“Climate change is weighing extra pressure on the budget of Bangladesh,” said Md. Shahab Uddin, minister for Environment, Forest and Climate Change in an interview over the phone with Unbias the News.

He hoped developed countries — the biggest greenhouse gas emitters — could keep their word and provide climate funding to developing countries such as Bangladesh, which are not major contributors to the climate crisis but will be massively impacted by it. “The developed countries promised USD 100 billion in climate finance every year. If they release the money, it will help Bangladesh to continue taking on more projects to adapt to climate change,” said the minister.

This article was originally published by Unbias the News as part of the Sinking Cities Project, which covers six cities’ response to sea-level rise. The investigation was developed with the support of Journalismfund.eu, European Cultural Foundation and the German Postcode Lottery.