Undertones: Brazil copes with ‘digital militias’ ahead of tense elections

Do the ends justify the means when dealing with disinformation? 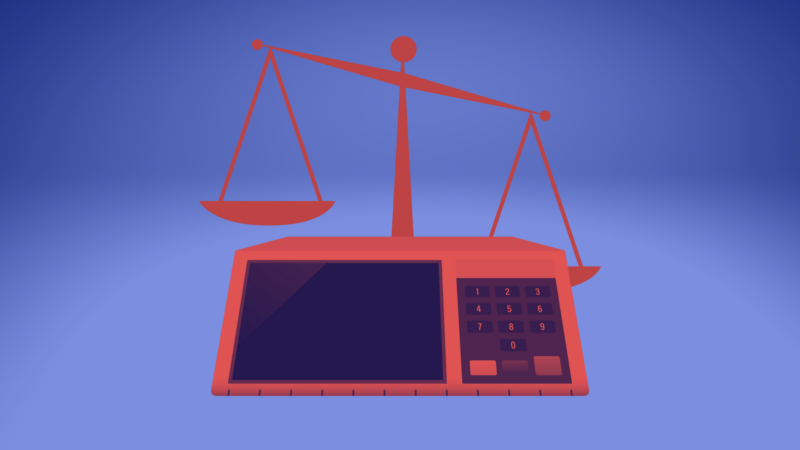 This story is part of Undertones, Global Voices’ Civic Media Observatory‘s newsletter. This edition features work from the Unfreedom Monitor. Subscribe to Undertones.

On October 30, Brazilians will vote in presidential elections that have been mired in disinformation. Claims of vote rigging and corruption — even cannibalism and satanism — have flooded Brazilian networks. The country’s situation exposes a conundrum: how can democratic institutions control an increasingly authoritarian government without playing by its same, despotic rules?

The dirty campaign between far-right incumbent Jair Messias Bolsonaro and leftist Luiz Inácio Lula da Silva reveals the complexity of how to deal with deliberately wrong or decontextualized information. This question is crucial when intentional “fake news” distorts how people perceive reality, and therefore, decide how to cast their vote in one of the world’s largest democracies.

How we got here

In early 2021, Brazil’s Federal Police reported to the Supreme Court that it had found evidence of “digital militias”, a criminal organization working online to produce fake news and “attack democratic institutions”.

It consisted of an elaborate network of public officials — from the Federal Cabinet all the way to the municipality — creating inauthentic pages, posts, and comments on social media. Brazilian media calls it the “Hate Cabinet”, as the main organizers were operating from inside the presidential palace. Jair Bolsonaro’s role in this structure is still unclear, but he and two of his sons are targets of the probe. They have denied the allegations.

To respond to the proliferation of disinformation, the Supreme Court has been tempted to suspend inauthentic accounts without officially revealing the evidence first, making it the prime enemy of Bolsonaro’s electorate. The Court has been accused by the right, as well as by some progressive voices, of overstepping its reach to control information online

On the Supreme Court’s side 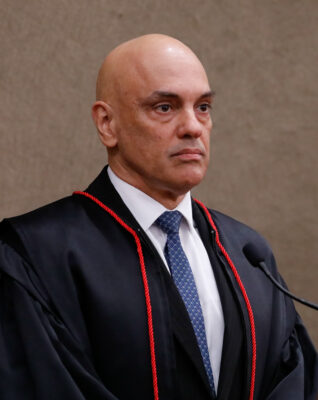 Alexandre de Moraes is a Supreme Court Judge who also took on the presidency of the Electoral Supreme Court earlier this year. He is leading the probes against Bolsonaro’s circle on coordinated campaigns on social media and attacks against democracy.

For many on the left, Moraes has become a symbol of institutional pushback against Bolsonaro’s authoritarian tendencies. Moraes has also been subject to online defamation and doxxing by Bolsonaro supporters, who accuse him of curtailing freedom of speech.

“Today, when we talk about combating disinformation, we are not talking about an isolated issue, we are talking about a fraudulent information machine, about digital militias that attack democracy, spreading hate speech, of violence,” Moraes said in a rare interview with the media.

According to our researcher Laís Martins, a journalist covering disinformation in Brazil, most mainstream Brazilian media endorse the Supreme Court’s narratives.

“Many people on the left or center of the political spectrum have supported the Court’s actions, even though some of them are seen as extrapolating the constitutional lines, for the sake of hindering disinformation and authoritarianism,” Martins says.

On October 20, the Electoral Supreme Court voted to expand its powers, including to temporarily suspend social media networks’ services in case of repeated non-compliance with the court’s decisions of removing false content.

Three days later, Bolsonaro ally Roberto Jefferson injured policemen with a rifle and grenades as they attempted to detain him for slandering a female member of the Supreme Court online. He had been under house arrest in the scope of the digital militias probe.

Democratic criticism of the Supreme Court

Main narrative: “The judiciary should not abuse its powers”

Brazil’s unprecedented levels of online disinformation are a new and evolving challenge for experienced constitutional lawyers. Some of them are asking the Supreme Court to not sacrifice what is urgent — stopping the flow of disinformation — for what is important, safeguarding democratic processes.

For example, earlier this year, Moraes authorized search and seizure warrants against pro-Bolsonaro businessmen who exchanged WhatsApp messages arguing for a coup d'état in case Bolsonaro loses. The catch is that Moraes appeared to have acted on leaked press revelations rather than wait for the Court’s evidence, so lawyers stated that Moraes had crossed a line. 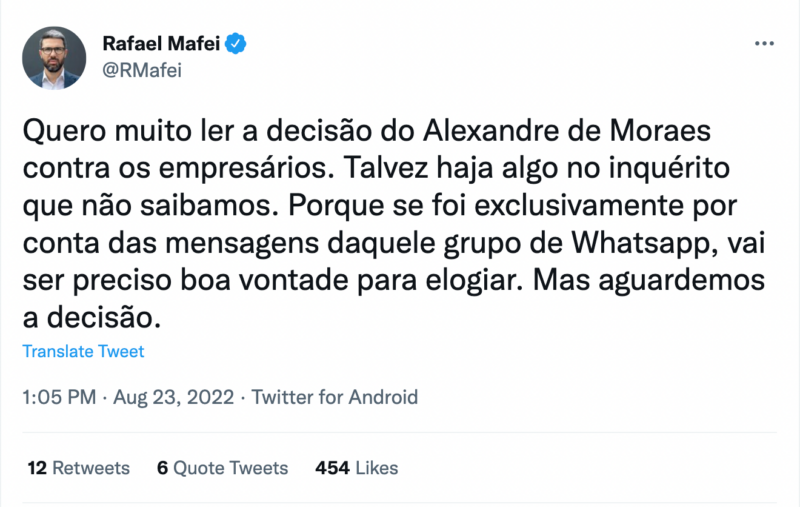 Translation: “I really want to read the decision by Alexandre de Moraes against the businessmen. There might be something in the probe we don't know about. Because if this was exclusively due to the messages in that WhatsApp group, I will be needing some willpower to make praise. But let's wait for the decision.”

A few days later, however, the Court’s investigation’s content was disclosed, revealing the evidence that the businessmen were indeed connected to a broader criminal group. Even so, the Supreme Court’s reputation was tarnished.

“Bolsonaro has skewed the country towards authoritarianism, pulling the institutions with him. The courts have made their own share of authoritarian measures because it would be the only way to reign him in, but it creates dangerous precedents,” Martins says.

From the pro-Bolsonaro camp

People on Bolsonaro’s side push counternarratives that place the courts as the enemy figure rather than explicitly contradict the investigations. All in all, we can summarize their overarching narrative as follows: “the judiciary does not want Bolsonaro to govern.”

As early as 2019, Eduardo Bolsonaro, son of President Jair Bolsonaro and Federal Deputy of São Paulo, tweeted that Bolsonaro supporters are unfairly treated as criminals. He promotes the narrative that “Rallying online in support of a leader is seen as criminal behaviour.”

Our researcher Martins writes that he “omits that those who ‘support Bolsonaro’, as he puts it, also engage in criminal behavior, such as attacks on democratic institutions, coordinated influence campaigns, and smear campaigns.”

Many far-right digital media outlets in Brazil are younger than the aforementioned tweet. Revista Oeste, founded in 2020, published an editorial this year penned by its founder J.R. Guzzo claiming that the left, the press and the Supreme Court view social media as an enemy. The piece, titled “A voz dos imbecis” (The voice of the idiots), features a portrait of Moraes. Guzzo’s narrative is “Investigations against coordinated behaviour on social media are effort to regulate the internet.” 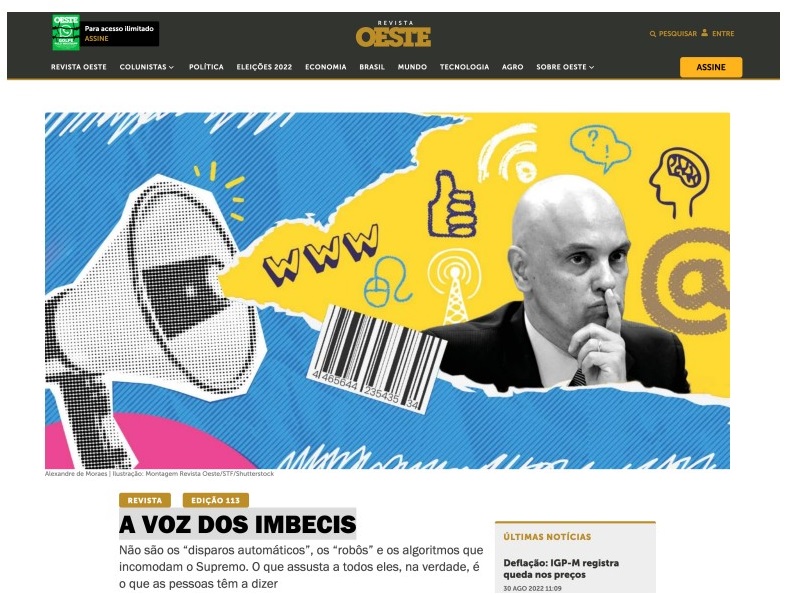 Translation: “It's not the ‘automatic triggers,’ the ‘robots,’ and the algorithms that bother the Supreme Court. What scares them all, in fact, is what the people have to say.”

Press freedom still exists in Brazil. Traditional and emerging outlets have “played an important role in pushing back against Bolsonaro's authoritarian attempts,” Martins says. “Pro-government narratives only find space in partisan media outlets aligned with the government and on their own social media channels. The Civic Media Observatory methodology has been particularly useful to understand these dynamics.”

Find out more about the Civic Media Observatory's mission and methodology. This story is a good place to start to learn about why we do what we do.