Hot and spicy Korean noodles have a competition in Nepal 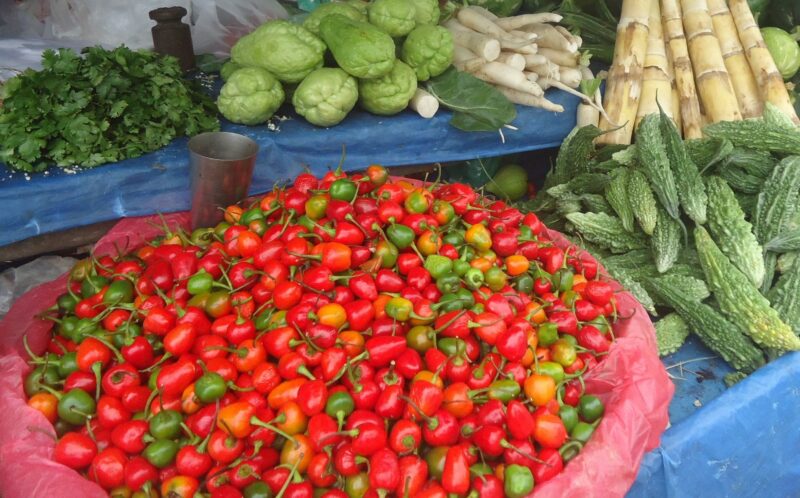 Akabare chilli being sold at a stall in a local market in Nepal's Makwanpur District. Photo by Sanjib Chaudhary. Used with permission.

Nepal’s indigenous round-shaped hot chilli pepper, locally known as ‘Akabare’, has taken the Nepali noodle industry by storm and is now forging ahead to international markets.

Also called ‘Dalle khursani’ (dalle meaning short and round-shaped in Nepali) owing to its round shape and native to eastern Nepal’s Ilam District, Akabare is famous for its distinctive hotness with a bit of sweetness, not to mention its unique aroma.

Akabare is particularly grown in the hilly districts of Nepal, from east to west. However, the ones that are grown in Ilam, Panchthar, Terhathum and Taplejung districts of Eastern Nepal are considered to be native.

Oh I'm huge chilli lover! U should try this baby it's called Akabare or Dalle chilli from Nepal its scotch bonnet family but this has beautiful aroma n super hot! 🔥🔥🔥🔥 pic.twitter.com/WmUl8kq7PB

Akabare paste and pickle have been a favourite among Nepalis for a long time, but recently the famous chilli pepper has got a new suitor – the noodle makers. They started adding chilli to their products with the aim of getting a pie of the hot and spicy Korean ramen noodles’ market share. Within a short span of time, they have been able to create a niche of their own – capturing a big chunk of the market segment in hot and spicy ramen noodles.

The trend started with a Nepal-based company focusing on noodles and snacks that added the native Akabare chilli and Timmur or rattan pepper (Zanthoxylum armatum) to its noodles.

“We wanted to replace the imported hot and spicy Korean noodles with our own domestic brand,” said Samir Shah, a seasoned noodle expert with more than two decades of noodles manufacturing experience and General Manager of Asian Thai Foods Private Limited, talking with Global Voices over the phone. “Instead of artificial hotness, we went for natural Akabare chillies known for their hotness and health benefits. After surveys, research and development, we came up with a completely Nepali flavoured noodle by adding ingredients like timmur, hing (Asafoetida), lapsi (hog plums native to Nepal), and white sesame seeds among others.”

The company exports Akabare noodles to countries like Australia, USA, UK, Japan, Malaysia, India, Bhutan, Hong Kong among others. In addition, the demand from Middle East countries is growing, according to Shah.

The success of the Akabare-flavoured noodles inspired other companies to launch their own brands of hot and spicy noodles: Current, Jackpot, Hot Pot, Pyro, Preeti, Gazzabko are some of the brands doing rounds in the Nepali market.

Twitter user @gezgintrk shared the annual consumption of noodles per capita by countries and Nepal is at the 2nd position.

With the growing demand, production and consumption of hot and spicy noodles, the cultivation of Akabare chilli has also increased in Nepal.

Likewise, Yashoda Foods Private Limited, another Nepali company that produces its Current brand of hot and spicy noodles, claims to use around 400 kilos of Akabare chilli per day. It sources the chillies from western hilly districts Palpa, Gulmi and Arghakhanchi together with imports from Syangja, Bhojpur, Ilam, Makwanpur and Kavre districts.

With the rising demand of Akabare chilli, farmers have expanded its cultivation throughout the country. Janak Acharya, a teacher and farmer from Palpa District in Western Nepal, in an interview with online portal Setopati said that he earned four million Nepali Rupees (USD 30,274) in the year 2021 alone by selling the chillies.

This video from Our Nepal on YouTube shows how Akabare is grown in Nepal:

As reported by online portal Clickmandu, many farmers groups have been cultivating Akabare chillies in coordination with cooperatives, targeting to sell their produce to the noodle companies. The commercial cultivation of chillies, in turn, has also created local employment.

However, with so many brands competing with each other for a pie of the market share, the question is whether the trend of using Akabare chilli will continue or start to slump after some time. But the craze for hot and spicy noodles is here to stay, as every day, four million packets of instant noodles are consumed in Nepal which is nearly 3,000 packets per minute, according to food writer Tom Heaton.