Muhoozi earned the moniker of 'Tweeting General' for his random, raw, and sometimes undiplomatic tweets 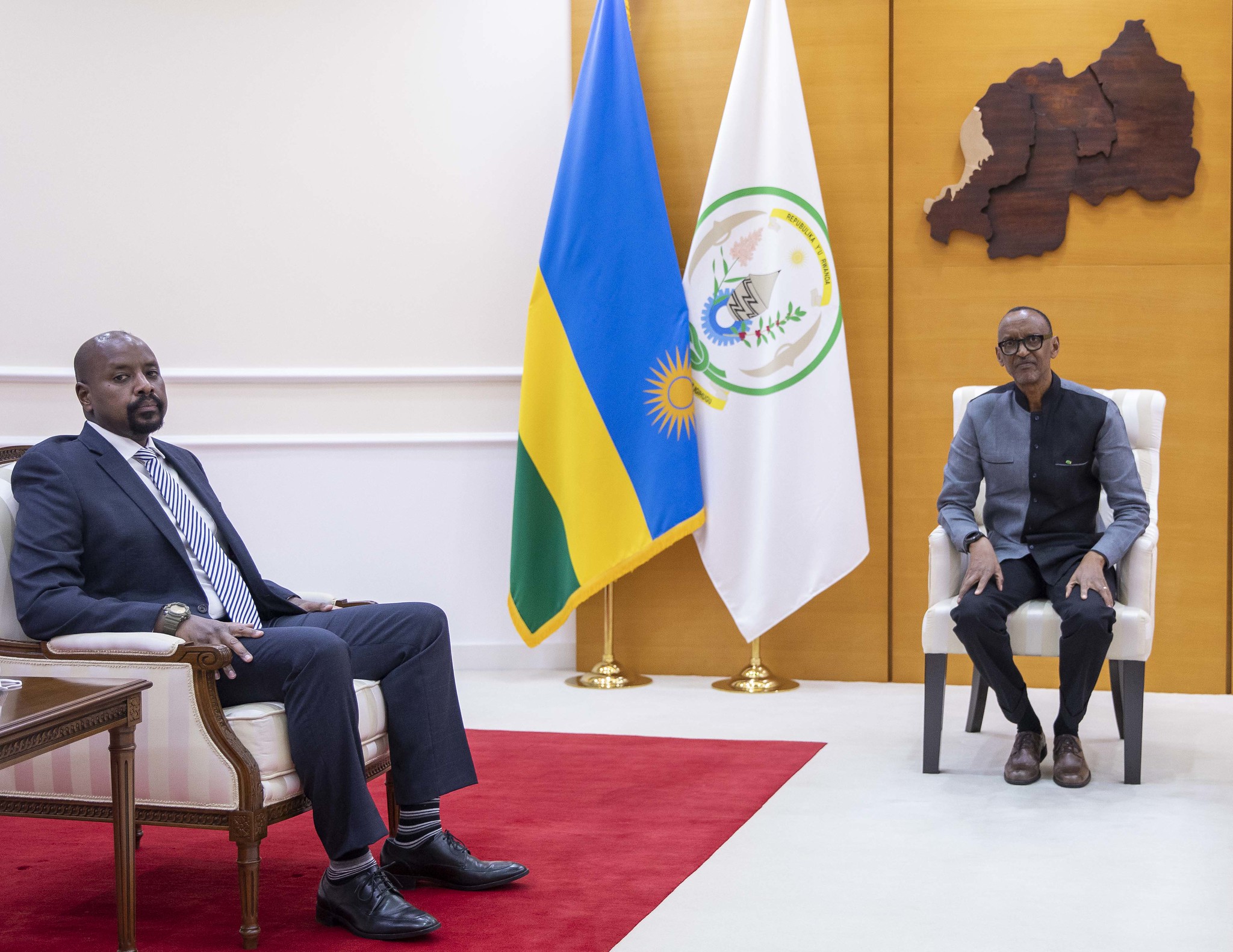 A recent Twitter storm by Ugandan former Lt-Gen Muhoozi Kainerugaba, son of President Yoweri Museveni and then, commander of the land forces, has provoked the ire of Kenyans on Twitter.

Posted using photos of his visit to Nairobi in June this year as a guest of former president Uhuru Kenyatta, General Muhoozi’s Twitter storm began with him advising Uhuru on how he ought to have run for a third term. Then, he continued by stating his desire for the creation of an East African Federation, and aspirations of his father becoming its leader, while he would become the Chief of Defence Forces. Perhaps most shocking was his threat of capturing Nairobi.

My only problem with my beloved big brother is that he didn't stand for a third term. We would have won easily! pic.twitter.com/6fmsJSXkii

He then went on to boast about his army's military prowess over Kenya's.

It wouldn't take us, my army and me, 2 weeks to capture Nairobi.

The collective of outspoken Twitter users in Kenya whose active deluge of responses and reactions to any acts of aggression or comments deemed as an affront to their sovereignty, whether coming from international media or global personalities, has captured news headlines.

For the better part of Oct. 4, “Muhoozi Kainerugaba” and “Muhoozi” were among the top five trending topics. Kenyans hurled all manner of insults including memes at him, his father, their military, and the Republic of Uganda as a whole.

General Muhoozi and his army on their way to capture Nairobi. https://t.co/Vm8vxxoEAD pic.twitter.com/sXMNJ2m7Ey

Reacting to Gen. Muhoozi’s inflammatory tweets was Dr. Kizza-Besigye, a political and human rights activist and former military officer in the Uganda People's Defence Force. Besigye who has unsuccessfully tried four times to vie for the presidency termed Muhoozi’s move as history repeating itself.  In 1976, Idi Amin, then the president of Uganda, threatened to annex parts of Kenya claiming that they originally belonged to Uganda. Amin later clarified that he did not plan to start a war.

Hours after his “Nairobi capture” tweet, Muhoozi appeared to backtrack on his declaration, by addressing “Kenyans of Twitter” (KOT).

KOT, I forgive you all for the insults you have hurled against me. Please let's work together to make East Africa great!!!

His subsequent tweets, which acknowledged the thrashing that he had received from Kenyan Twitter, revealed that his father appeared to have scolded him for the action.

I would never beat up the Kenyan army because my father told me never to attempt it! So our people in Kenya should relax!

Twiplomacy in the age of Trump & Muhoozi 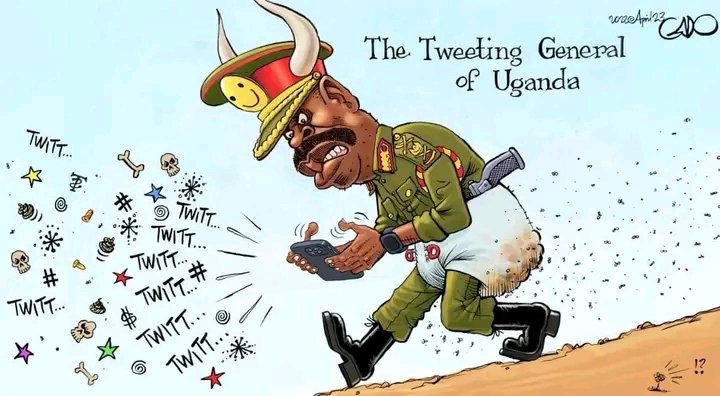 How do you treat or respond to tweets that threaten a country’s sovereignty from a verified account of an influential figure in government?

This is a question that government officials and the diplomatic community have had to grapple with more frequently since former U.S. president Donald J. Trump took office.

Findings from a 2020 research paper, titled Twiplomacy: How Twitter of Donald Trump Has Changed Diplomacy of the United States of America, explored how Twitter usage by Donald Trump changed the diplomacy of the U.S. Based on a case study of tweets, the report found that Trump's manipulative use of language on Twitter was a telltale sign of propaganda.

Though many have termed Muhoozi’s raw ramblings and outbursts as just empty rhetoric, they could threaten regional balance.

Just this year in June, he shared a series of provocative tweets that went on to upset the delicate regional balance between the Democratic Republic of Congo (DRC), Rwanda, and Uganda.

I hear someone in the DRC parliament said that ‘Muhoozi is an enemy of Congo’. Me? So an ‘Enemy’ of DRC is one who saves people in North Kivu and Ituri from being slaughtered by ADF in ‘Le triangle de la mort'? He tweeted

This was in response to the Speaker of DRC's lower house of parliament, Christophe Mboso N'Kodia Pwanga, who accused Muhoozi of betraying Congo, by signing a pact with Rwanda and for Uganda’s active role in the fall of Bunagana (a small town in Rutshuru Territory, North Kivu Province, in eastern DRCongo) under control of M23 — an armed group of resurgent rebels in eastern DRC.

“It was just a matter of time before the tweets would put Uganda in an awkward situation and hurt its interests in the region,” The African Report noted.

Whilst his latest threats of invading Kenya have been taken seriously by Kenyans online, Kenyan government officials are yet to respond or issue a statement regarding Muhoozi's threats.

Just a day after Muhoozi's tweets, the Ugandan Ministry of Defence released a statement announcing his promotion from lieutenant general to full general. He will continue with duties as a senior presidential adviser for special operations, the statement read. However, he will no longer command Uganda's land forces. The statement did not explain the motivation behind the decision.

Nanjira Sambuli, a Kenyan researcher and policy analyst who works on understanding the unfolding, gendered impacts of information and communications technologies (ICT) adoption on governance, diplomacy, and media wondered how Kenya’s Ministry of Foreign Affairs would respond to Gen. Muhoozi’s tweets of aggression.

How @ForeignOfficeKE responds to the gaffes spewing from Muhoozi’s verified Twitter account will be a case study in #digitaldiplomacy literature! Cc @DiplomacyEdu @Ilan_Manor
The analog context makes the digital reactions by citizens all the more fascinating!

Her Twitter thread reacting to Muhoozi’s Twitter storm commended Twitter users for exercising citizen diplomacy even as she derided Kenyan media for exercising lazy journalism and ‘newsifying’ the tweets without providing any context or going a step further to substantiate the claims from the General.

From the Tweeting General to the Next President?

Muhoozi, who has earned the moniker of ‘The Tweeting General‘ for his random, sometimes undiplomatic raw tweets that elicit strong reactions was, until a few years ago, behind his father’s shadow.

His penchant for controversial political and social posts that draw sharp criticism and reactions has earned him a significant following currently at 600,000.

“Most of his tweets are politically radical, confrontational and antagonistic, a far cry from what is expected from an army general,” noted the East African.

Many including former presidential contender Robert Kyagulanyi Ssentamu, better known as Bobi Wine, who was angered by the promotion, see this series of events as the further grooming of Muhoozi to succeed his father.

He will soon be “retired” as he awaits coronation as head of our country. All people who wish Uganda well must stop being indifferent!