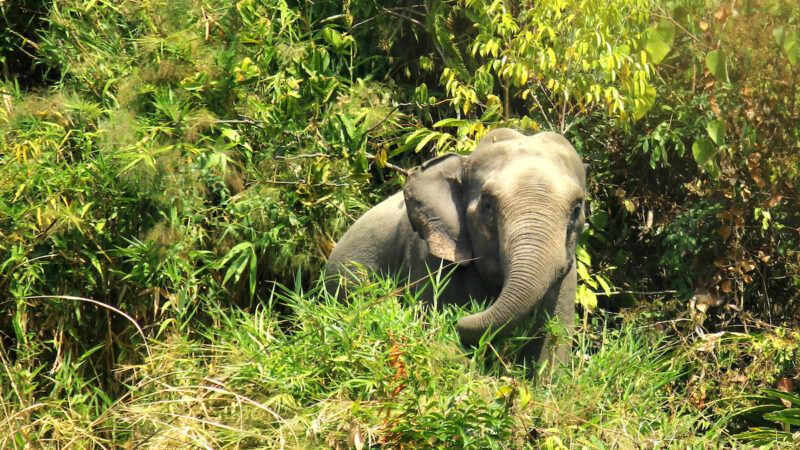 Asian wild elephants have roamed Bangladesh for over a thousand years but their numbers are dwindling due to a growing human-elephant conflict in the country. Around three dozen resident and migrant elephants were killed in different parts of Bangladesh since January 2020, seven were killed in November 2021 alone.

Seven elephants have died in Bangladesh in the last two weeks. Wildlife experts say that if the death of elephants continues like this, this endangered animal could become extinct in Bangladesh very quickly. pic.twitter.com/0BwOr4vgi9

The wild elephant population has come down below 300 as their habitat is getting smaller due to the increase in human settlements in forests and hills.

Loss of habitat pushing them to extinction

According to the IUCN Red List of Threatened Species, the elephant has become a critically endangered species in Bangladesh. Only a century ago, they were abundant in different forests of Bangladesh. During the British colonial period, elephants were captured for training before sending them for duty to Zamindars or to join the troops. At present, there are dozens of captive elephants mostly used in the timber industry for timber carrying and some in circuses.

There are three types of elephants found in Bangladesh, namely captive, resident and migratory. The migratory elephants are found in forests near the Indian borders in Sherpur, Netrokona, Kurigram, Sylhet, Moulvibazar, and Myanmar borders in Bandarban and Cox’s Bazar regions.

Bangladesh is one of the most densely populated countries in the world. Its increasing human settlements have encroached into forests and hills which diminished the spaces for wild animals, especially the elephant.

The Garo hills in Sherpur district bordering India once was very large. Gradually, it has shrunk as people from elsewhere created settlements there besides the local indigenous people. These intruders are cutting down the hills and building houses. Currently, hundreds of acres of land of the forest department are illegally occupied by them.

Multiple species of elephants roam the hilly areas and migrate between the borders of Bangladesh and India. But the elephant habitat in Bangladesh is shrinking due to increased human settlements. The settlers are harassing the elephants and their spaces in various ways leaving them insecure.

Meanwhile, the settlements of Rohingya refugees after 2016 have severely disrupted the two major corridors for the elephants in Bandarban and Cox's Bazar at the borders with Myanmar leaving them in danger.

Human settlement in the spaces originally inhabited by elephants has increased the human-elephant conflict in the country. The elephants want food while people want to protect their crops and houses.

Elephants are coming down to the human habitats due to the food crisis in the hills. They are causing damages to various agricultural crops and human homes. People are sometimes terrified of the elephant movements.

Each year, a number of people are killed in Bangladesh due to attacks by the elephant herds. The movements of wild elephants near human habitats create fear among locals. Over a dozen elephants are also killed each year as a result of human intervention, as they are shot, electrocuted or chased away.

On November 6, 2021, a herd of 18 wild elephants stormed into human habitats in south Mithachari in Cox's Bazar district on the South and five people including forest officials were injured while chasing them back to the forests. In Sherpur district in north Bangladesh, villagers are spending sleepless nights to protect their lives and property. They keep the elephants away by beating drums, blowing firecrackers and lighting torches; but these are not enough to stop the hungry elephants in the hills from coming down at night.

Earlier in November 2021, a total of 7 elephants were killed in Bangladesh, five of them were electrocuted and one was shot. Journalist Mostafa Yousuf tweeted:

Hello, wildlife and animal lovers.
Today another young elephant calf was killed in Cox's Bazar, southern part of ??. I am traumatized and tired to see the decimation of gentle giant. The forest dept, govt all turned spectators. pic.twitter.com/w4XycNdnyc

A number of protests were organised across the country demanding to stop the killings. Save the Nature of Bangladesh, tweeted:

Part of a protest rally organized by Save The Nature Of Bangladesh at the premises of Sreevardi Upazila in Sherpur district to protest against the brutal killing of 6 wild elephants in Bangladesh in one week. pic.twitter.com/5sXxeH54xW

— Save The Nature Of Bangladesh (@SaveTheNatureBD) November 16, 2021

On November 21, 2021, the Bangladesh High Court directed the concerned authorities to take swift action to stop the killings of elephants. The court was acting on the writ petition filed by three wildlife activists to end the elephant killing in Cox’s bazar, Chittagong, Sherpur and other areas in the country.

Animals never seize human habitats. Humans occupy animal habitats and kill them. Humans are the most uncivilized creatures on earth.

Mostofa Firoz, a professor at the Jahangir Nagar University and a member of the Asian Elephants Specialist group mentioned in an interview with Daily Kaler Kontho that the laws in the land are sufficient to protect the elephants. However, it is important to enforce these laws.

The laws we have to protect elephants are adequate. If someone dies from an attack by elephants, the state provides financial assistance of 300,000 Bangladeshi Taka (US$ 3490). There is even a provision of maximum life imprisonment for killing an elephant. These are good laws.

According to Firoz, human encroachment on elephant habitats and systematic aggression must be stopped. Also, a lot needs to be done to make people aware. He also suggested the creation of special teams of volunteers composed of forest officials and local residents to play a role in keeping the people of the affected villages calm and ensure that the movement of elephants remains uninterrupted.