Take a hike! Some of the Caribbean's most scenic trails in photos

From brilliant beaches to the heights of the Blue Mountains, Caribbean trails are breathtaking 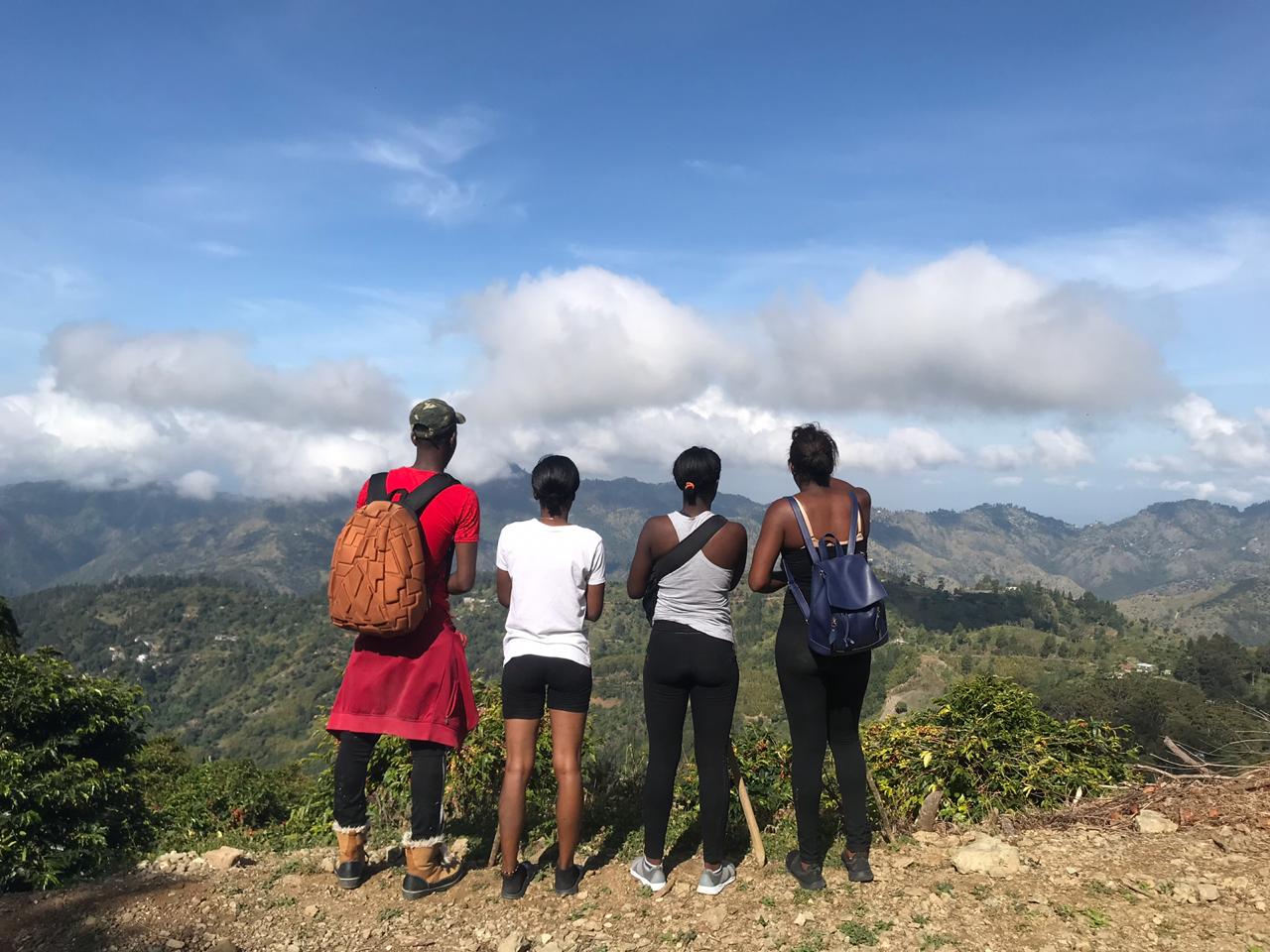 Hikers stopping to look at the view on Jamaica's famous Blue Mountain Trail. Photo by Junior Carson, used with permission.

The United States enjoys hiking so much that it dedicated an entire day to it: National Hiking Day, celebrated on November 17. Although the footprint of Caribbean hiking trails may not be able to rival the 60,000 miles the U.S. can boast of, the region has many avid hikers, the views are just as breathtaking, and—in the midst of not only the COVID-19 pandemic but the climate crisis, which poses an existential threat to many island nations—it may be more important than ever to connect with nature.

In that spirit, here are a few photos from various Caribbean territories that may just inspire you to dust off your hiking boots and hit the trails! 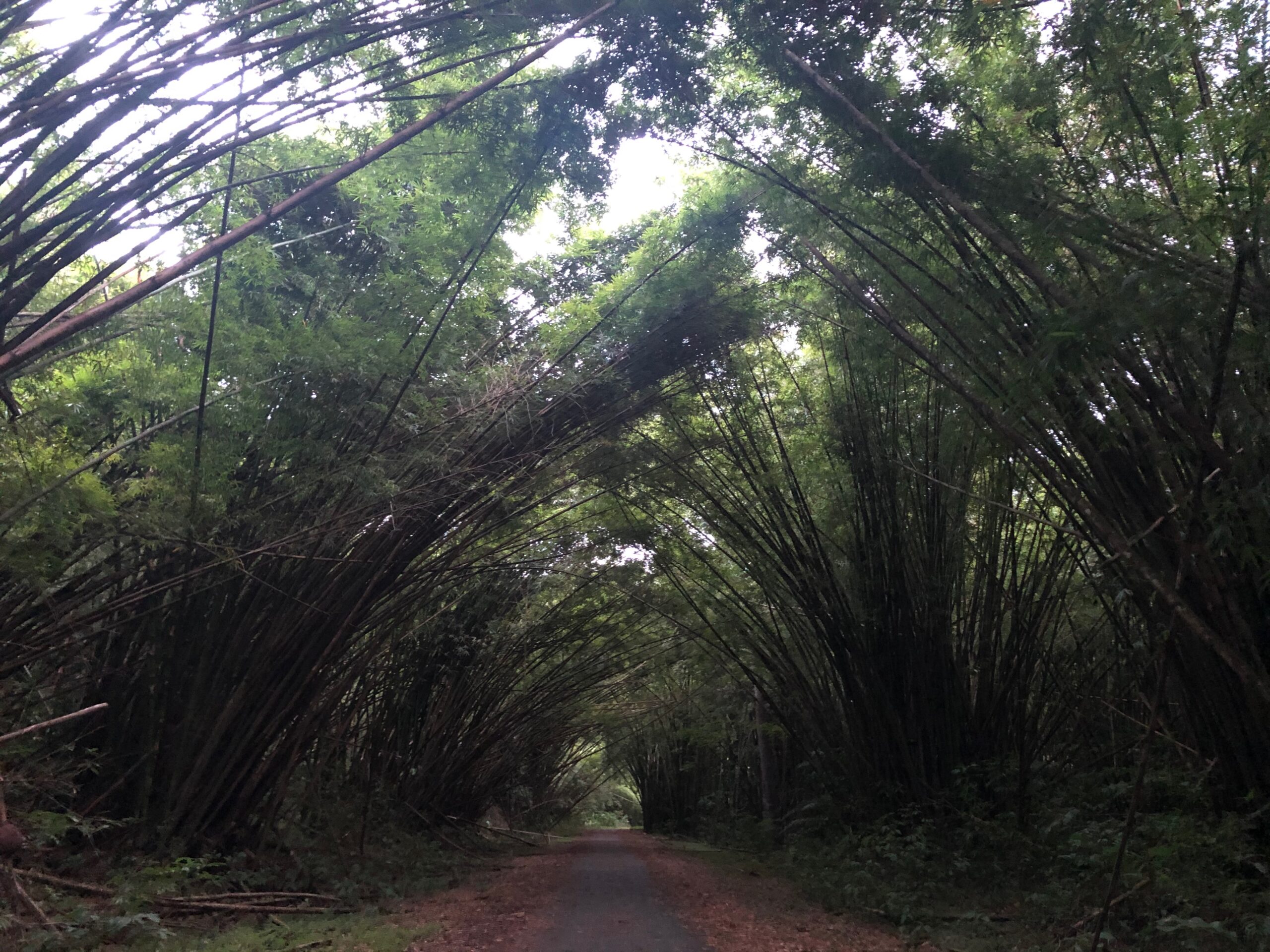 Entrance to the Bamboo Cathedral in Chaguaramas, Trinidad. Photo by Janine Mendes-Franco, used with permission.

Located in Tucker Valley in Trinidad's Chaguaramas National Park, the Bamboo Cathedral is so named because the tall stalks of the bamboo lining the trail overlap to form basilica-like arches. Several watercolor paintings by Trinidad’s revered 19-century artist, Michel-Jean Cazabon, were inspired by this trail, which has remained more or less the same for over 150 years. 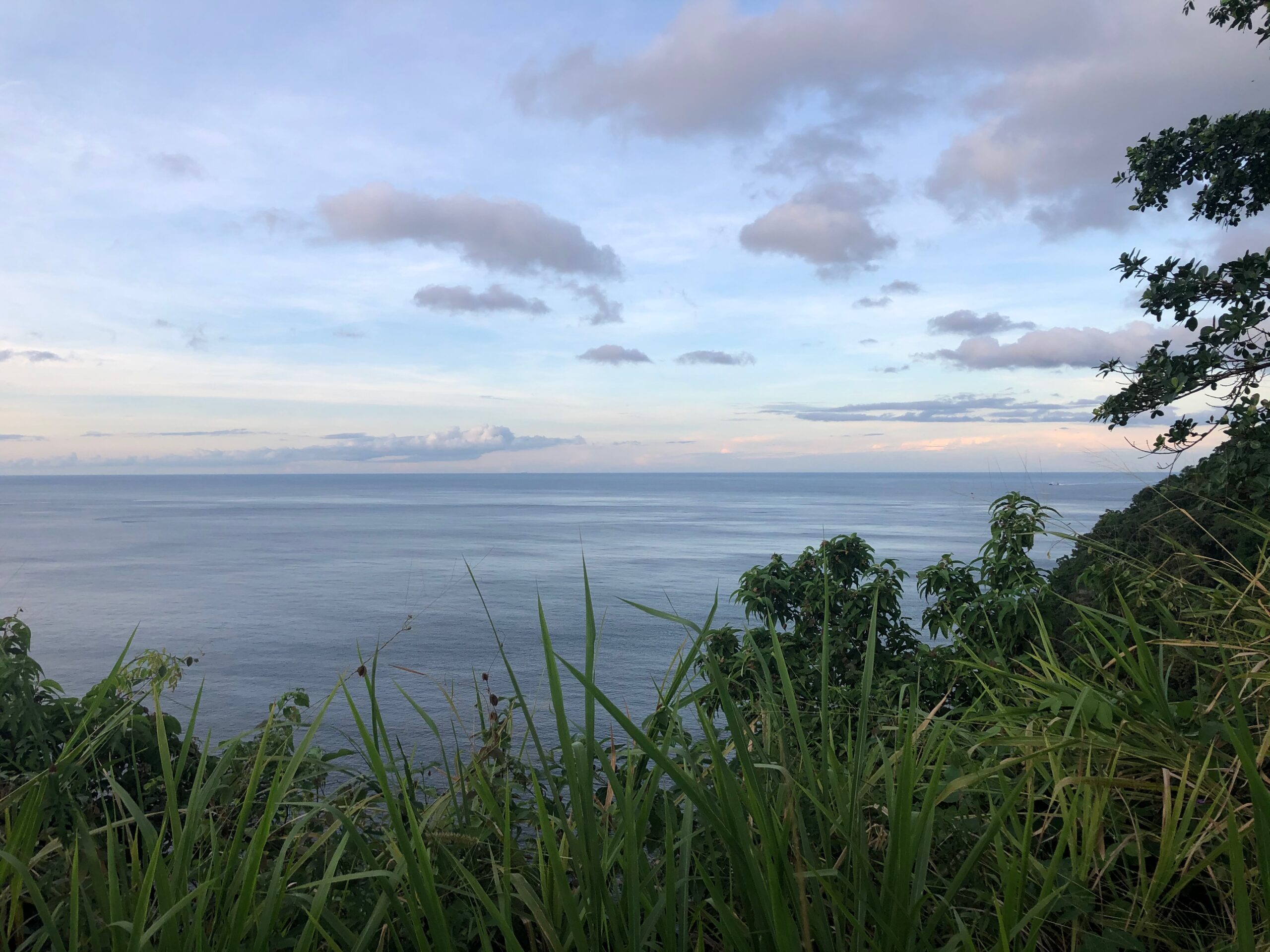 View of the sea along the road to the Tracking Station at dusk. Photo by Janine Mendes-Franco, used with permission.

The trail, which offers stunning glimpses of Macqueripe Bay and the north coast, ascends to the Tracking Station where a massive satellite dish dating back to the Cold War dominates the landscape. Chaguaramas, on Trinidad's western peninsula, was also used as a United States military base during World War II. 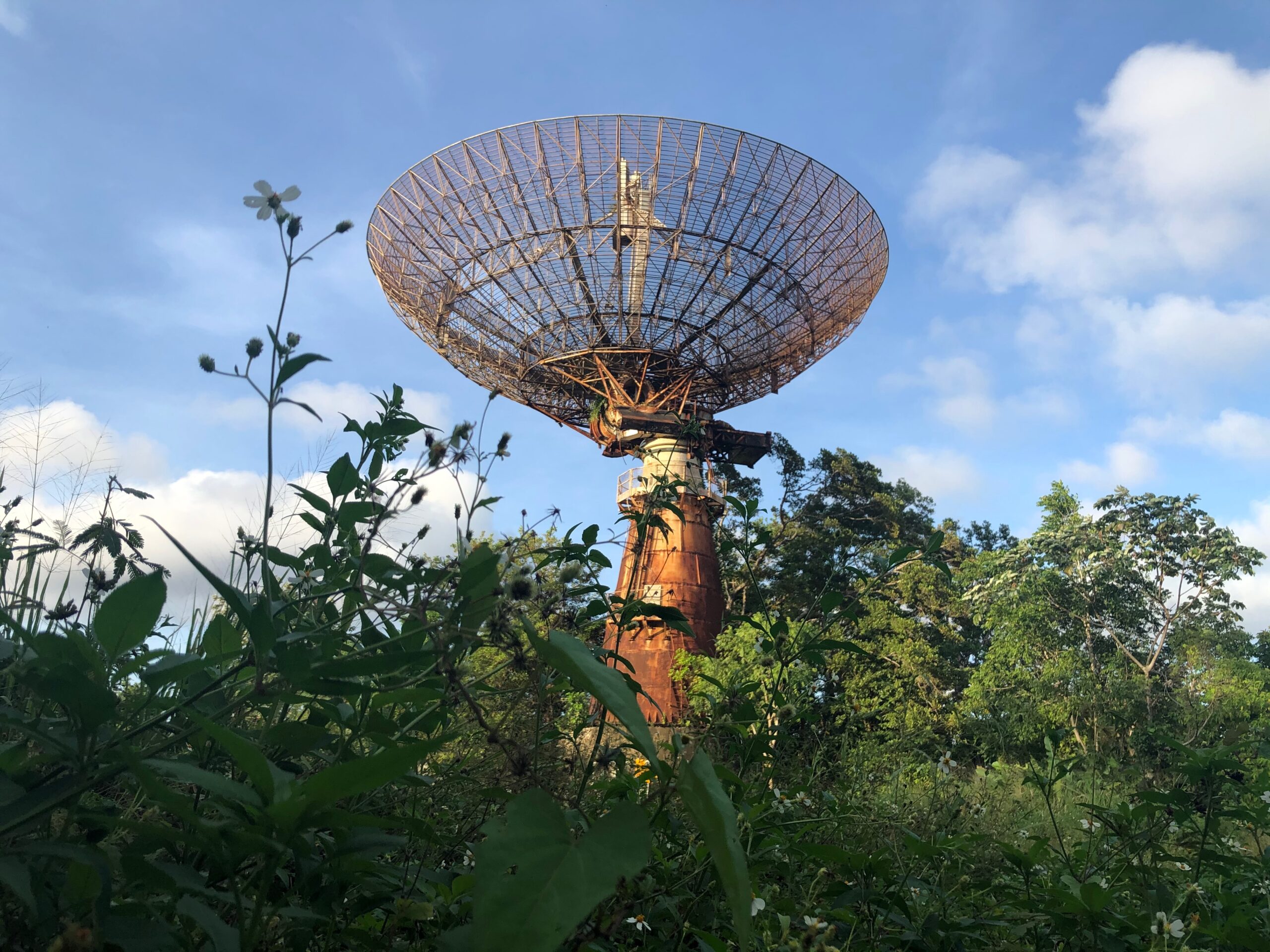 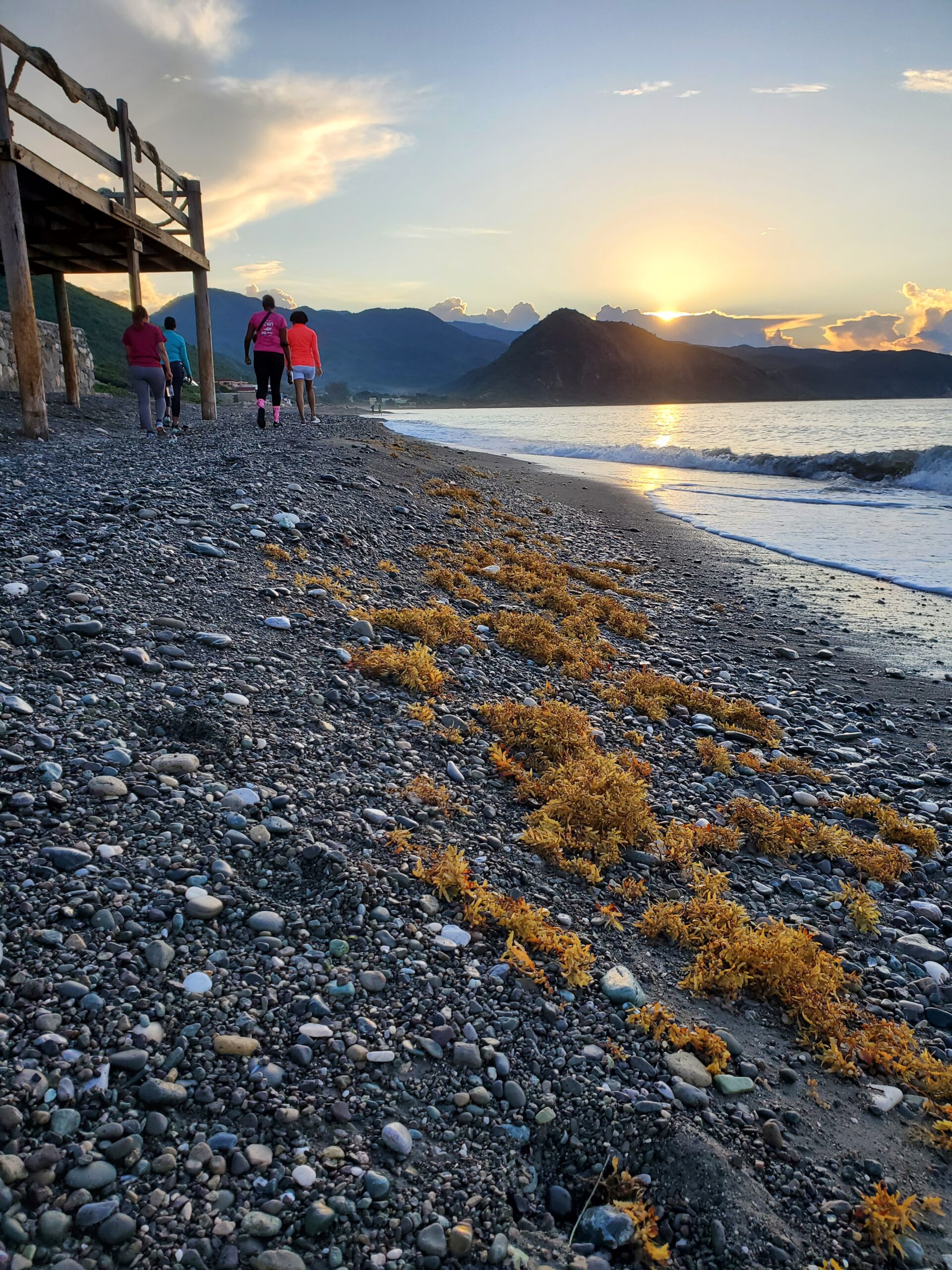 A family on a coastal hike from Harbour View in the parish of St. Andrew, to Bob Marley Beach in St. Thomas, Jamaica. Photo by Paula-Anne Porter Jones, used with permission.

Part of the charm of Caribbean hiking is that many trails lead to the beach, like this trail on Jamaica's southern coast that runs from St. Andrew, the parish in which the capital, Kingston, is located, to the neighbouring parish of St. Thomas on the island's south-eastern tip. 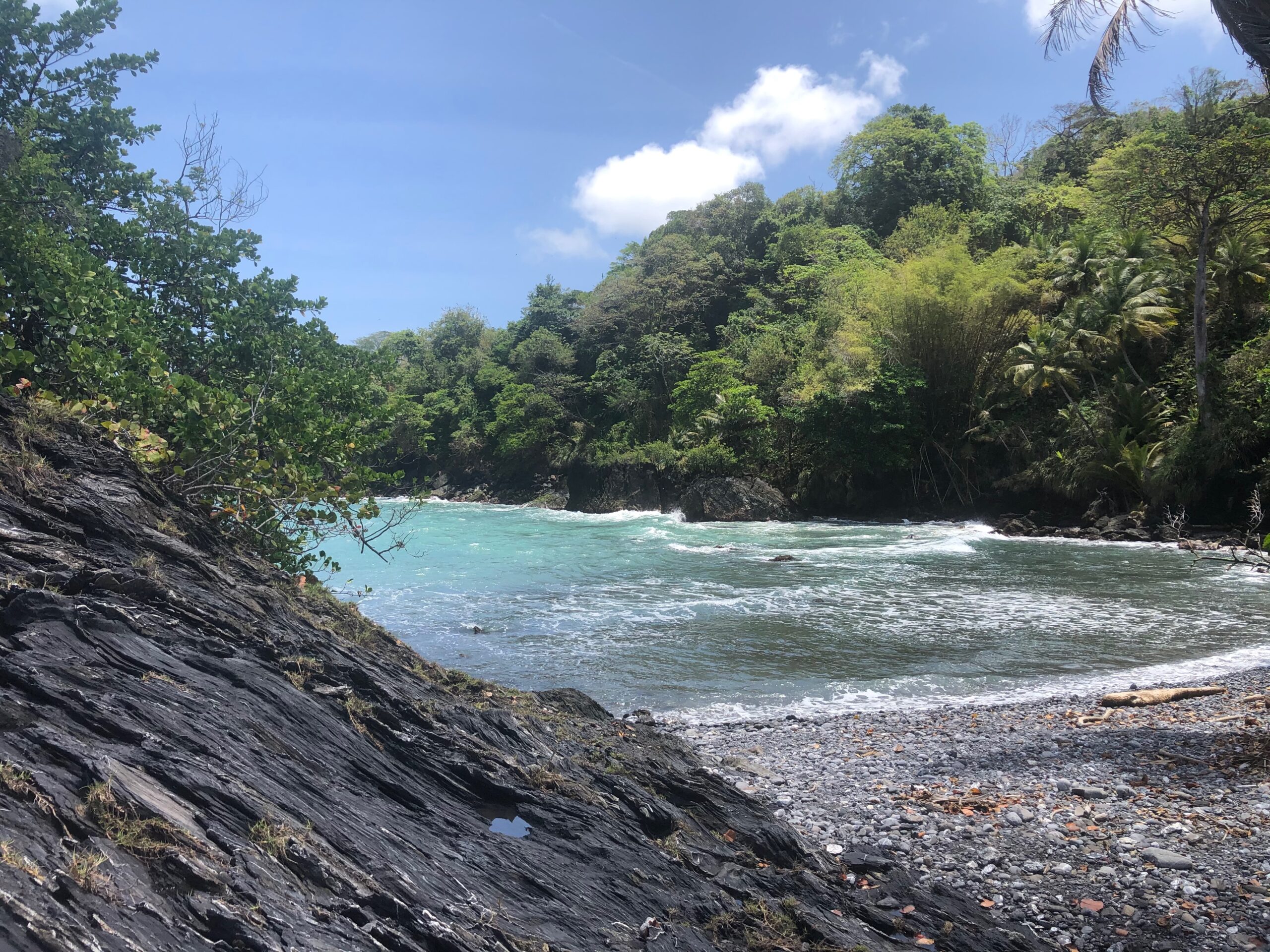 There are many hiking trails along Trinidad's north coast, including Rio Seco, which leads to a waterfall, Shark River, which is a pleasant trek along a winding river, and this unnamed trail frequented by locals, which leads to this scenic pebble beach. 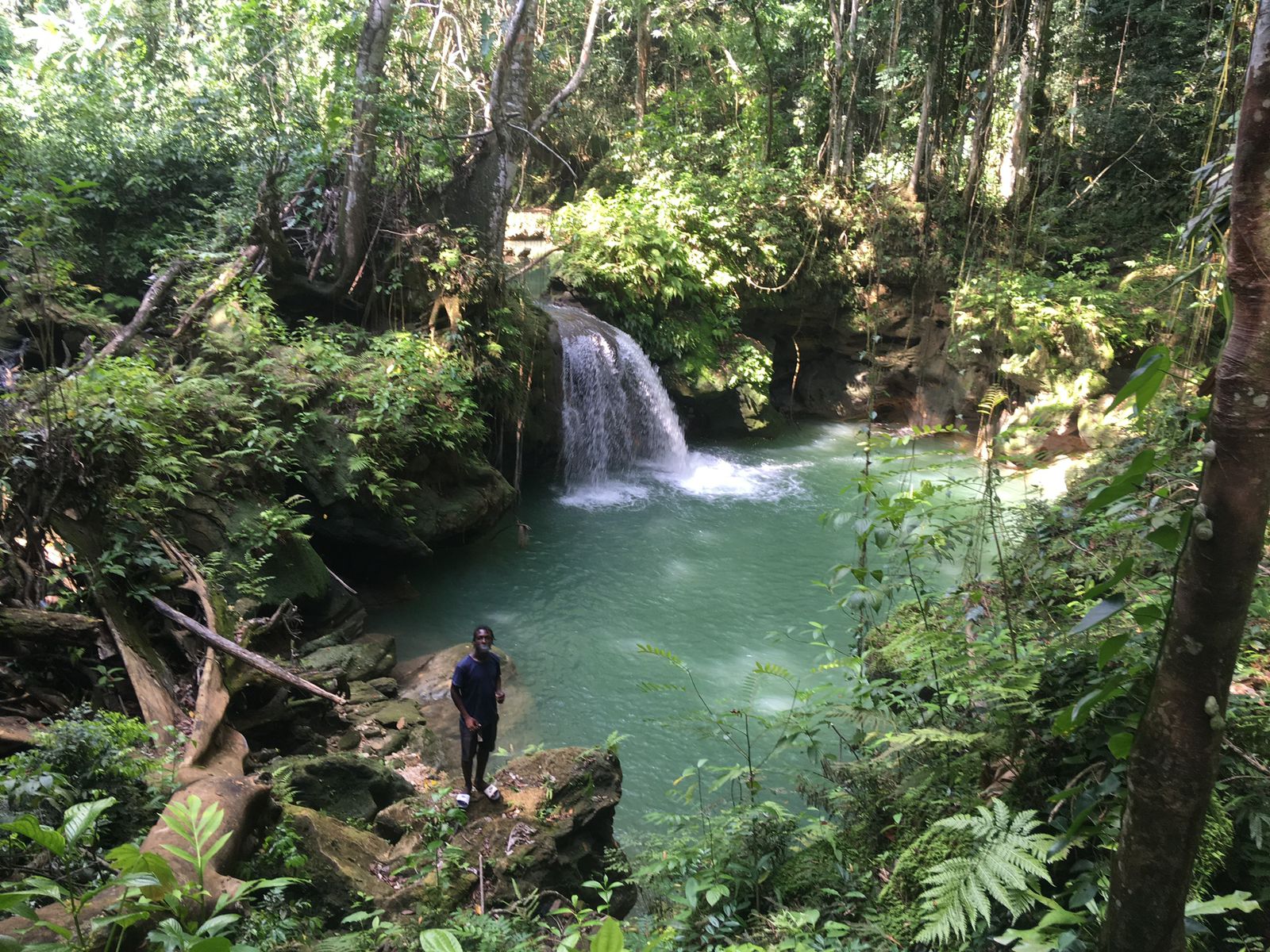 Jamaica is not called “the land of wood and water” for nothing. The island has some of the most breathtaking locales in the region, including this waterfall, at Jamaica's Breadnut Valley Estate, which is off the beaten track, but well worth the trek. 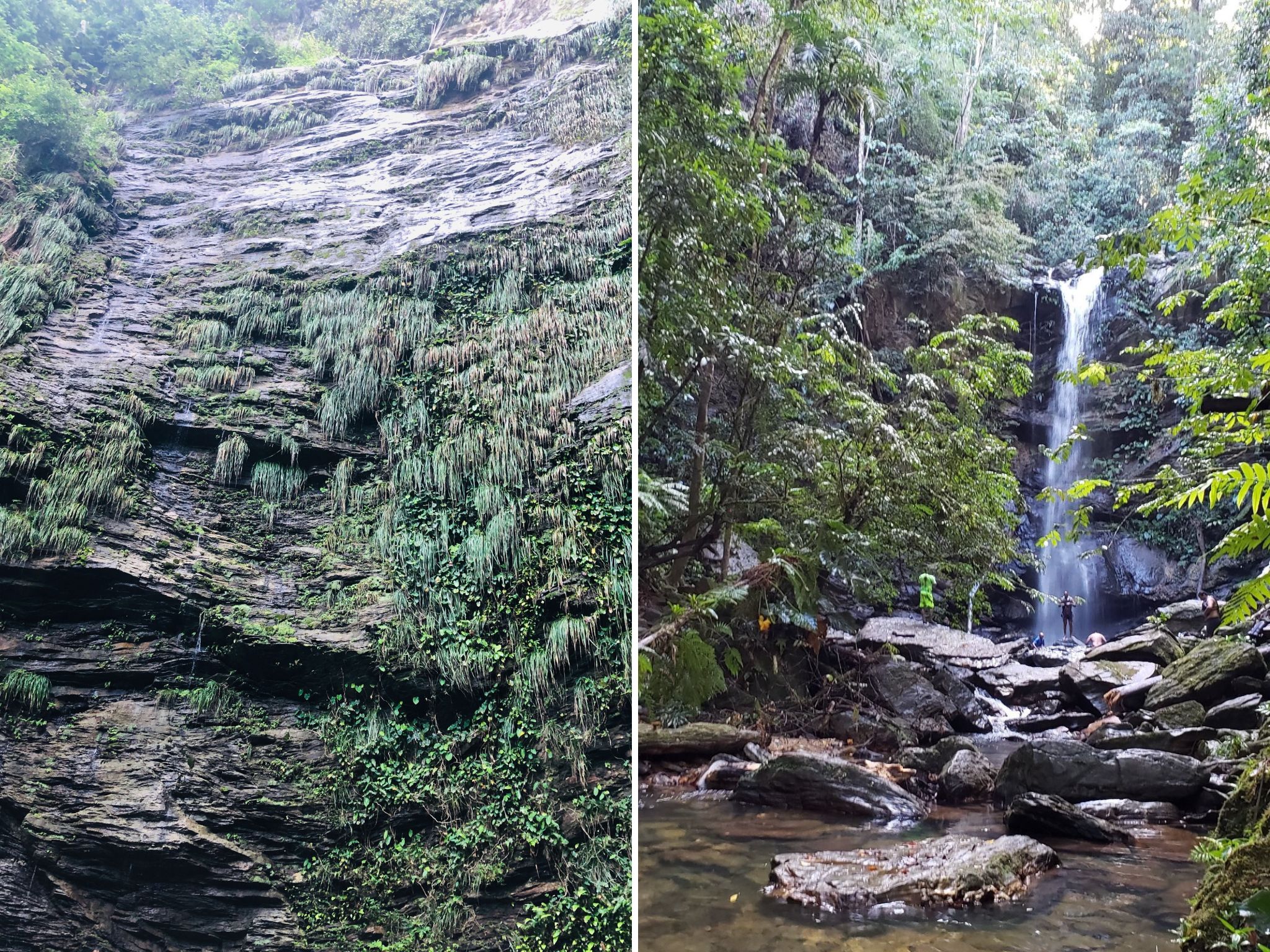 The hike to Trinidad's Edith Falls involves a fairly short and easy walk until you get you the rocky section, located upriver, which involves some climbing. The fall itself is really more like a water wall, as the water flows down various sections of the expansive rock face—especially during the rainy season, when it is more impressive. The hike to Avocat can be approached from opposite directions, one mostly via land and part of the other involving trekking through the Marianne River. 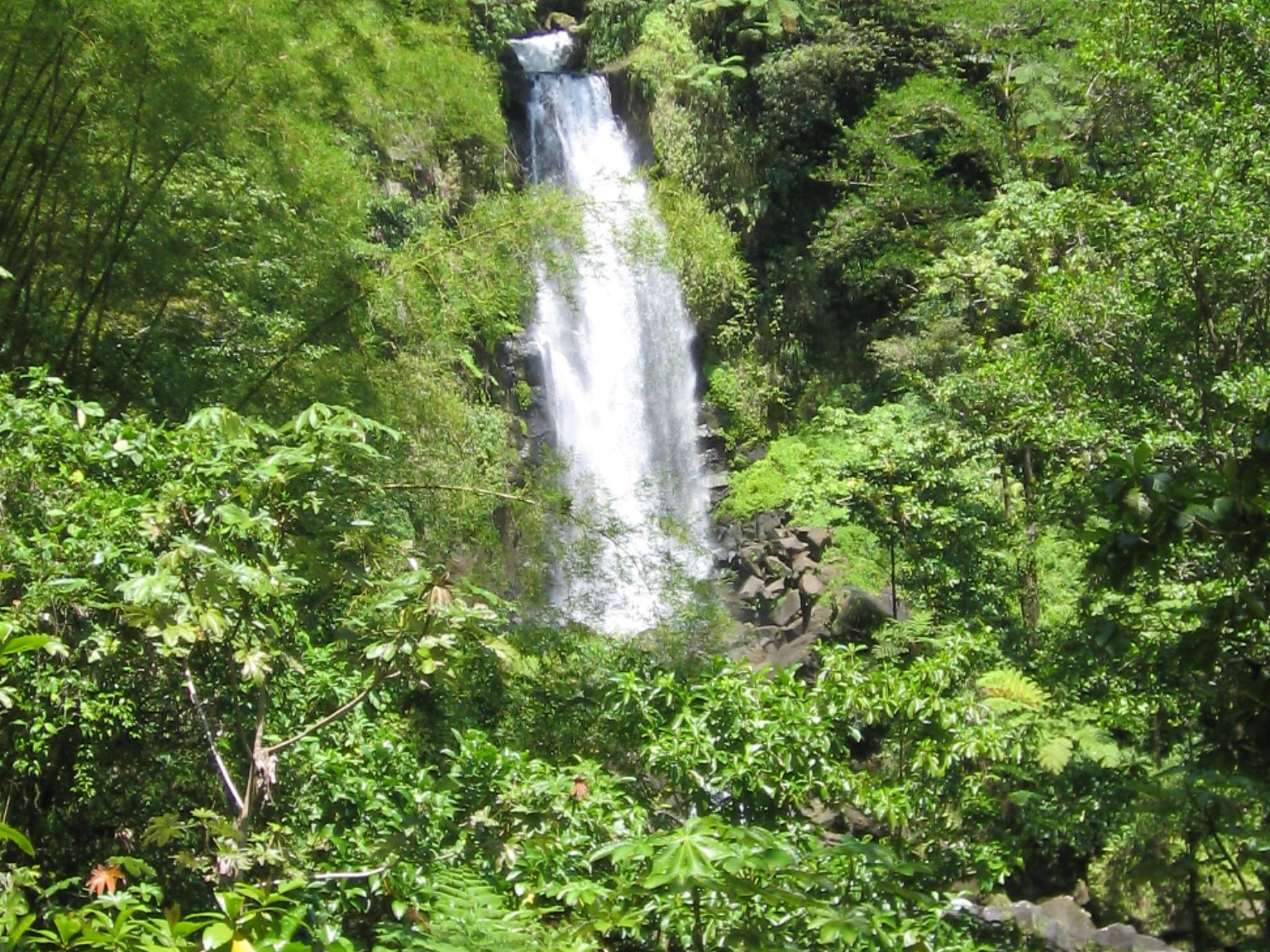 The trail to Dominica's impressive Trafalgar Falls is a comfortable 10- to 15-minute walk, but if you need a respite before reaching the waterfall itself, there are warm sulphur pools you can take a dip in en route. Depending on how agile you are, you can climb a bit further and swim in the pools and springs beneath the falls. 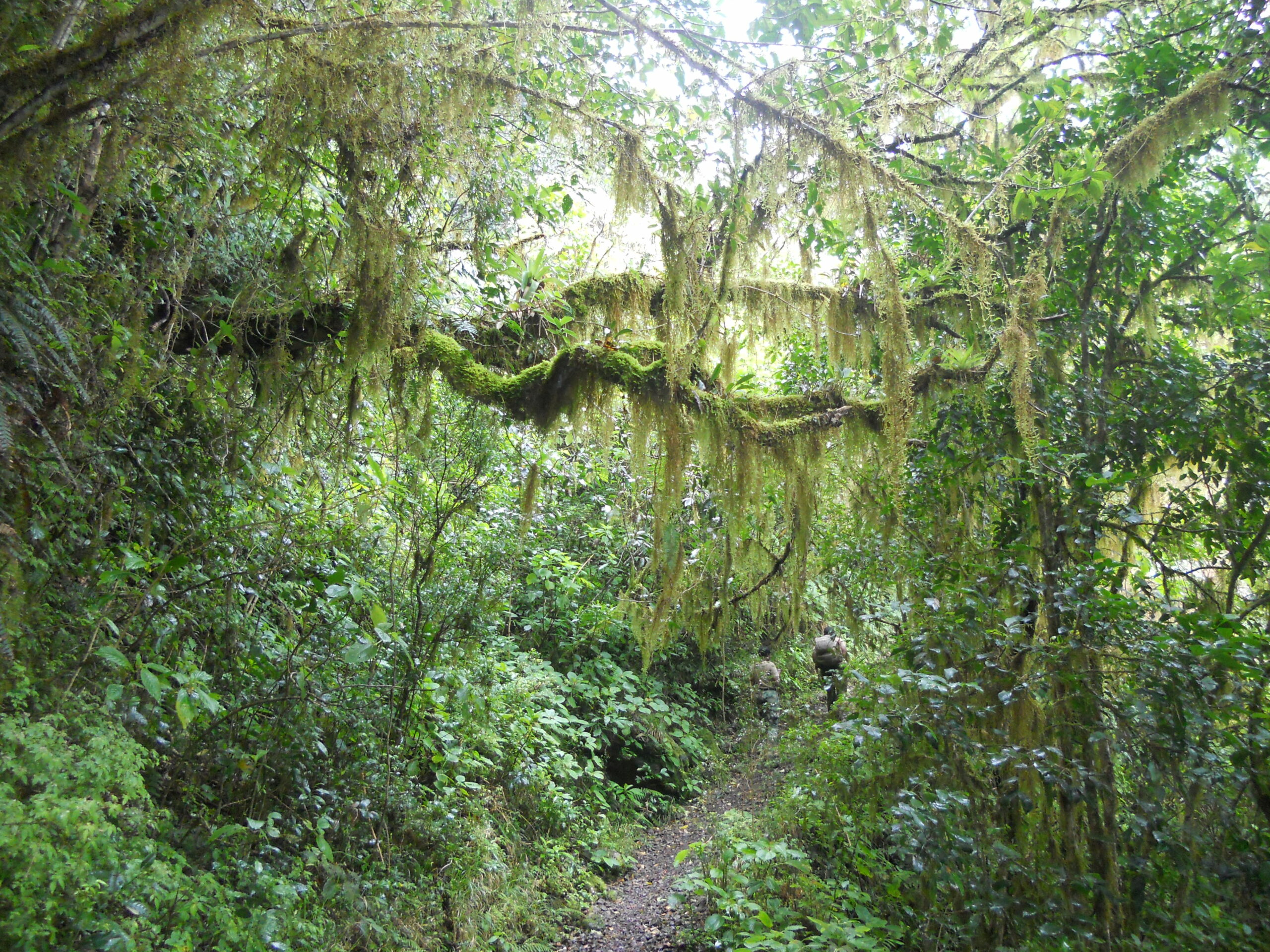 On the Blue Mountain Trail. Photo by Susan Otuokon/Jamaica Conservation and Development Trust, used with permission.

One of the great joys of hiking in the Caribbean is its viridescence. Although dry seasons in the Caribbean can be harsh, the trails are typically lush and leafy, providing a real escape from the rigours of the world. 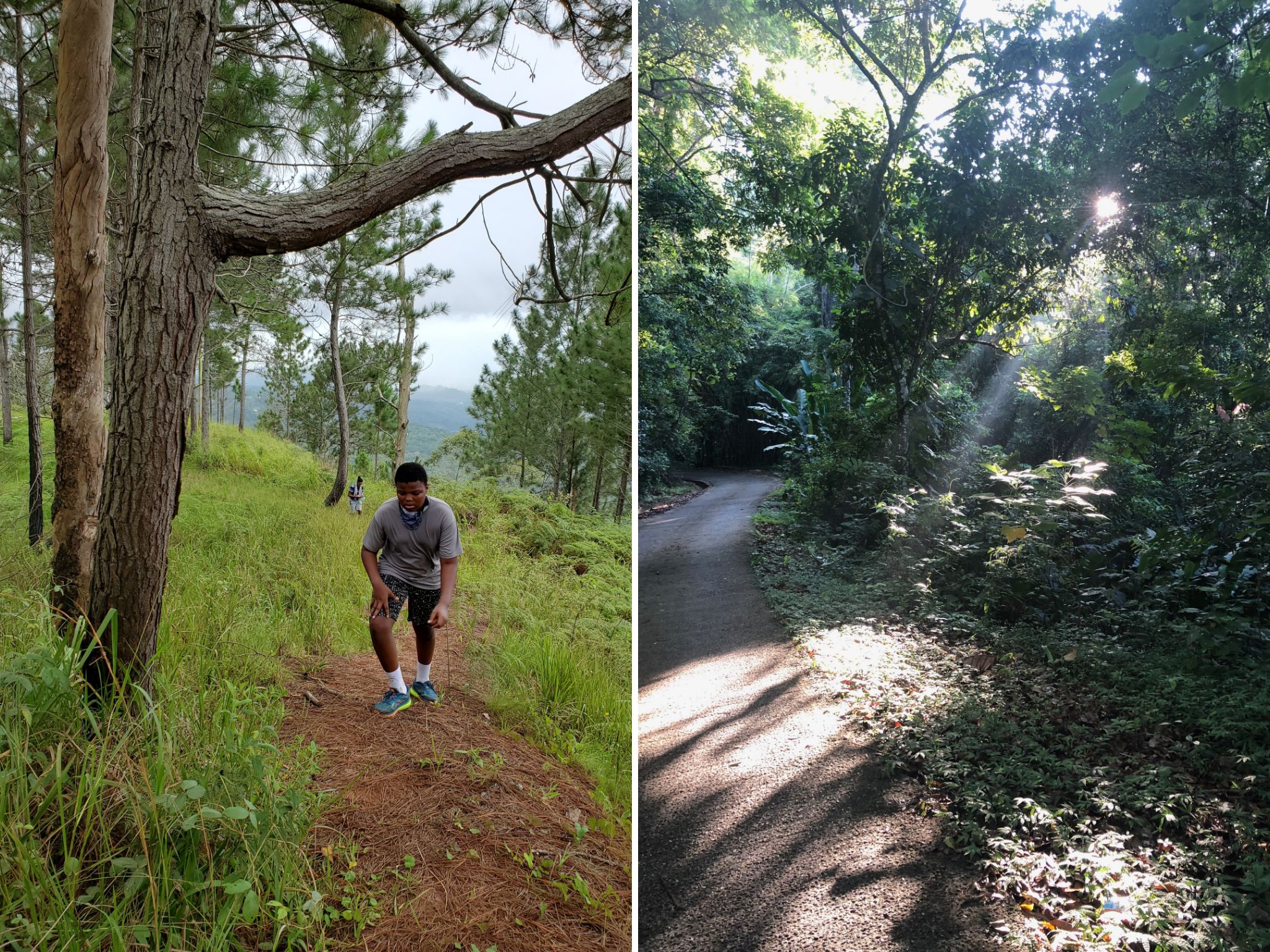 Many Jamaican families hike quite regularly; the photo above shows a group walking uphill on Bull Head Mountain, Clarendon, a steeper, more sloping trail than the road to Mount St. Catherine in Trinidad, where the road is paved all the way up to The Ball—a radar station used by the country's civil aviation authority. 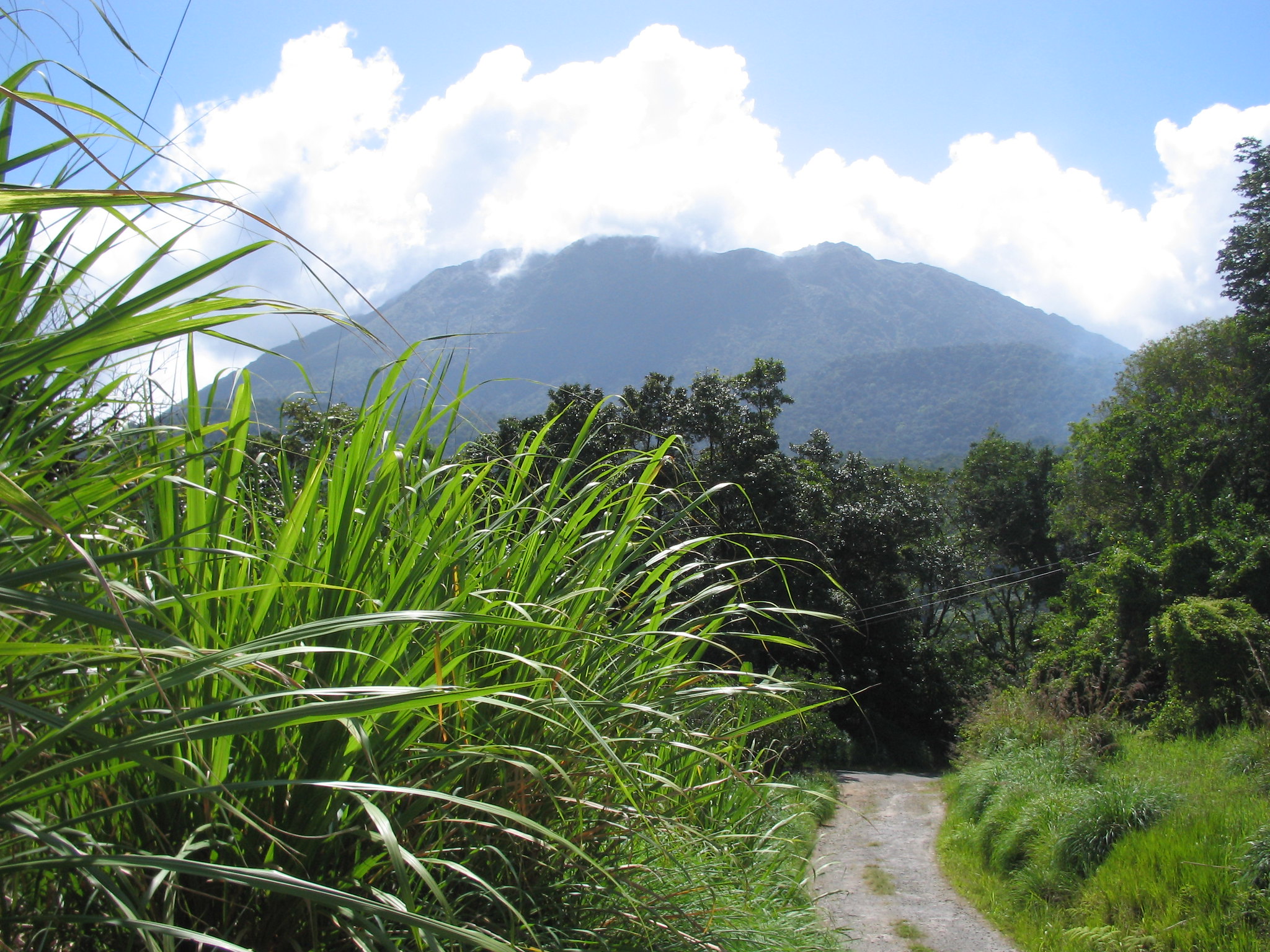 One of Dominica's many amazing trails, with one of the peaks of the island's forest reserve in the background. Photo by Janine Mendes-Franco, used with permission.

Dominica is one of the most stunning Caribbean islands for hiking, full of lush forests, wide rivers, refreshing waterfalls and sulphur springs, and of course, beaches. The trail above, north of the capital, Roseau, is between 500-600 metres above sea level, mild compared to the difficulty level of other trails. 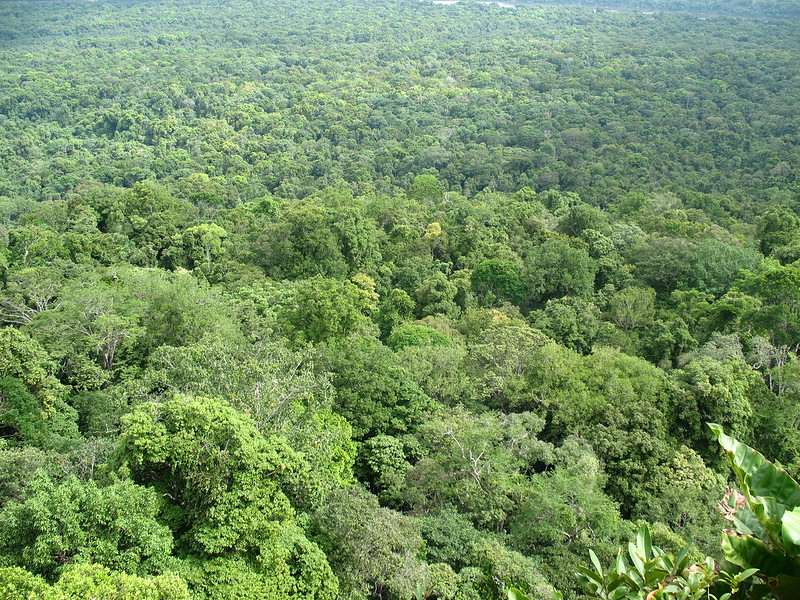 View from the top of Turtle Mountain, Guyana. Photo by Skye Hernandez, used with permission.

Though on the South American continent, Guyana is considered part of the Caribbean, and its trails are nothing short of spectacular—from the well worn path to Kaieteur Falls, to Turtle Mountain, located inland south of the capital, Georgetown, and offering panoramic views of the Iwokrama Forest from its summit, which is about 300 metres above sea level. 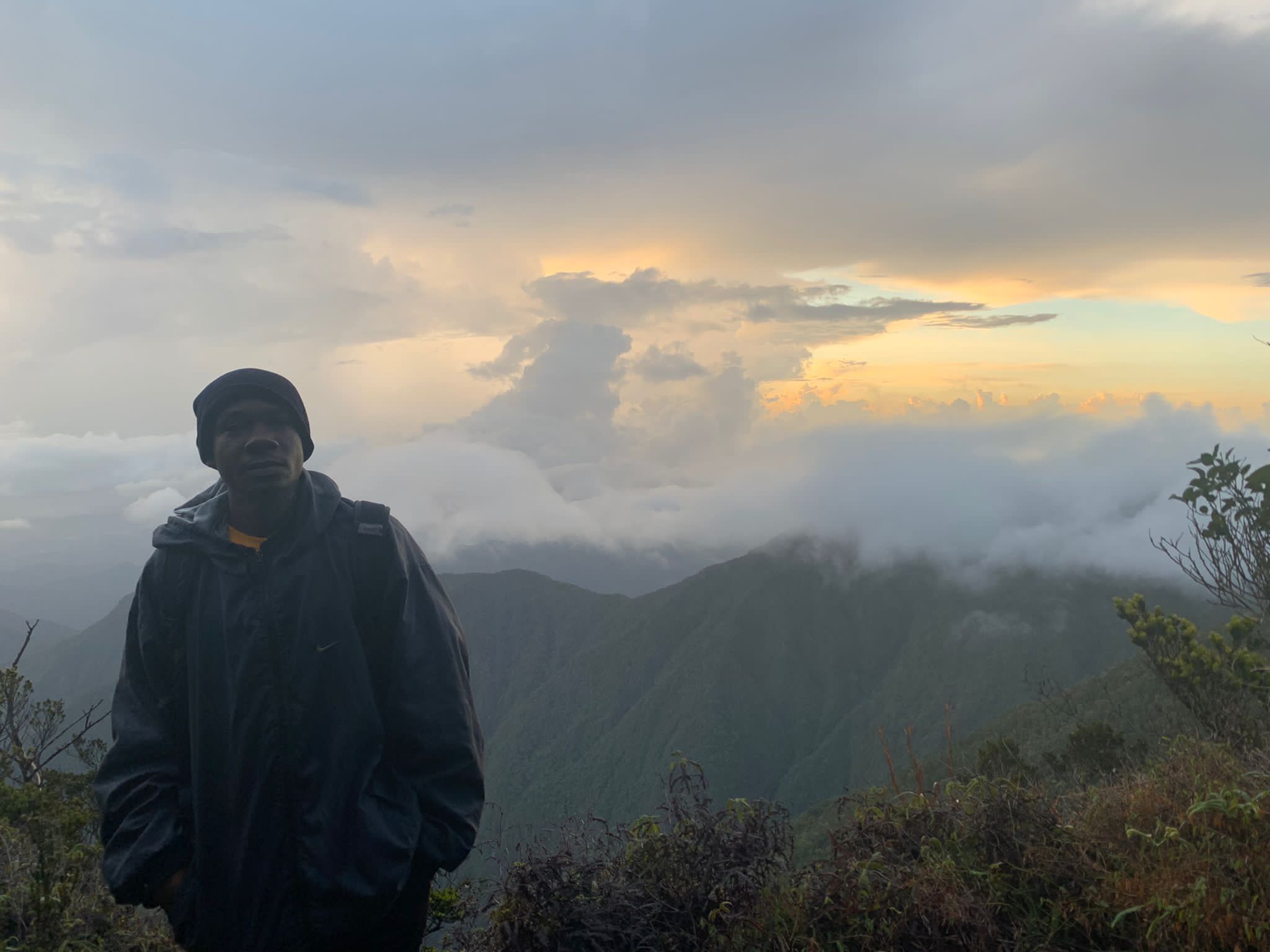 At the top of Jamaica's Blue Mountain Peak at dawn. Photo by Junior Carson, used with permission.

Like any hiking expedition, the journey may be challenging, but the views—not to mention the sense of accomplishment you feel once you've arrived at your destination—are worth the effort. Experienced hikers tend to be on the move early, in order to take advantage of the cooler morning hours, before the sun rises and the resulting heat makes the climb more difficult. This is the time of day when you tend to see more bird and animal activity as well, which adds to the experience. 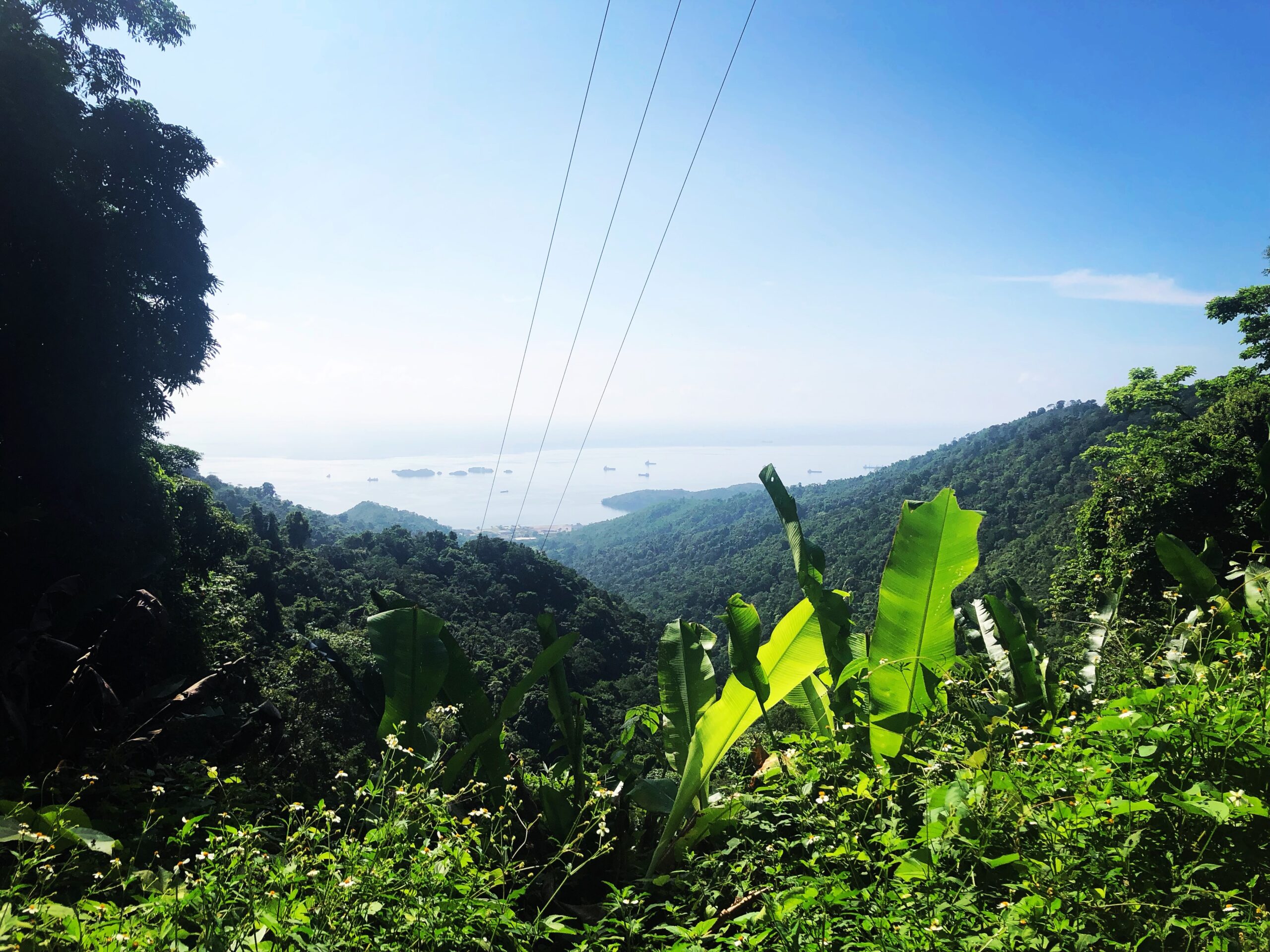 No matter what time you set off, however, hiking in the Caribbean is always an adventure. Take the trails below: the Mount St. Catherine hike is approximately 10.5 miles (about 17 km) to the top and back, via a steadily rising trail that reaches more than 500 metres above sea level, and from which you can see Trinidad's Five Islands, dotted along the fringes of the island's northwesterly coast. Because the road is well paved, it is also a popular jaunt for cyclists.

One of the views from Barbados’ Coco Hill Forest. Photo by Annalee Davis, used with permission.

Hiking may not be one of the first activities that comes to mind in Barbados since it is a relatively flat island—but Coco Hill Forest is helping to change that perception. A hike through the property (a former sugar cane plantation) reveals a wilder, more regenerative green space that is quite different from the island's otherwise colourful, manicured tourism offering. 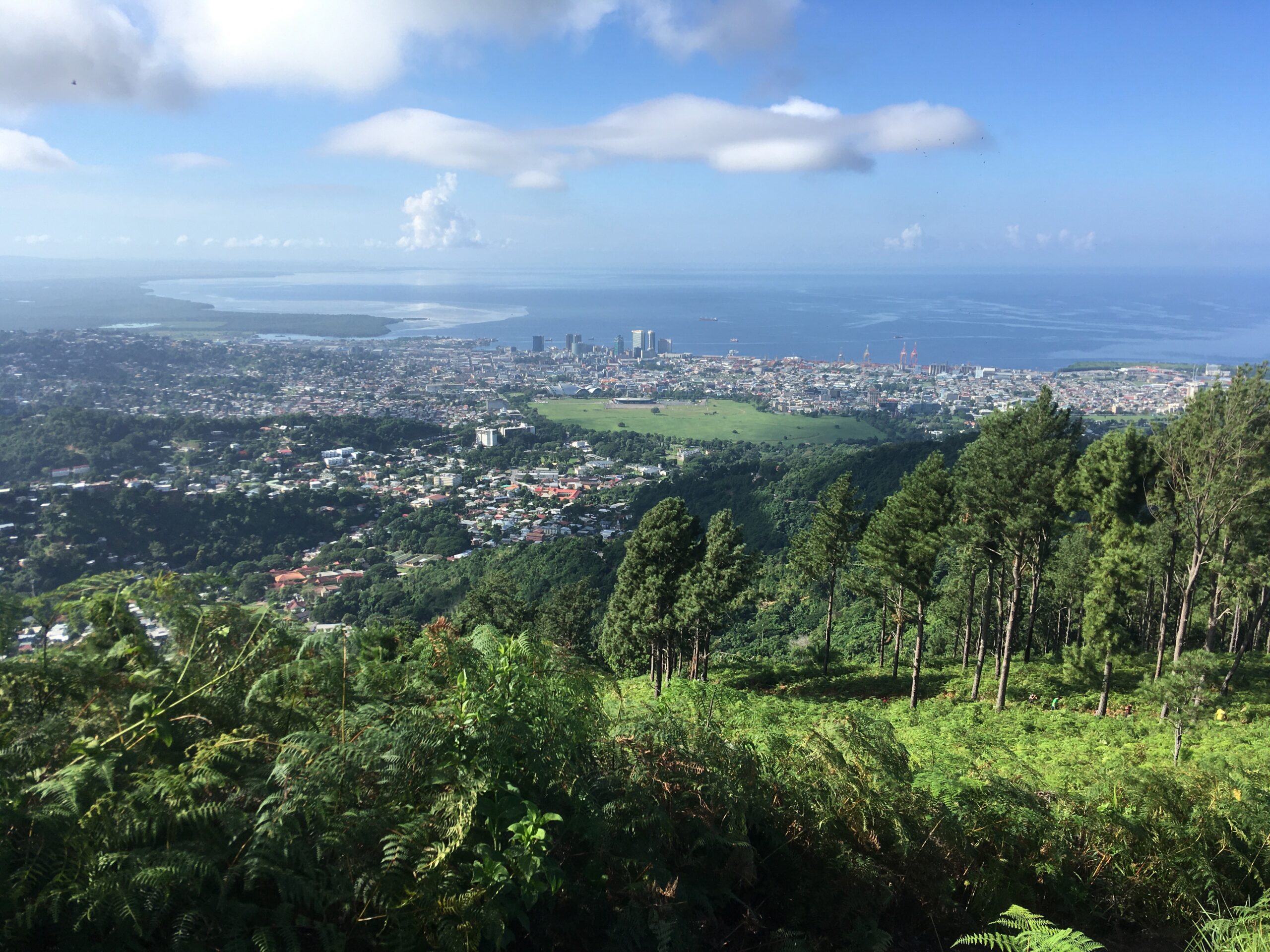 One of the spectacular views from Breezy Hill, that looks towards Trinidad's capital, Port of Spain. Photo by Janine Mendes-Franco, used with permission.

Breezy Hill, a trail that rises steeply above Lady Chancellor Road overlooking Port of Spain, Trinidad's capital, offers stunning views in all directions: the hills going north into Maraval, the westerly slopes facing “down the islands,” and looking south towards the city, into the Gulf of Paria. The hike can be demanding if you are not used to the terrain, with one section so steep that regulars have tied a rope to the area's pine trees in an effort to help newbies.

Once you catch the hiking bug, though, you'll want to challenge yourself more and more, and discover ever more fascinating regional locales.