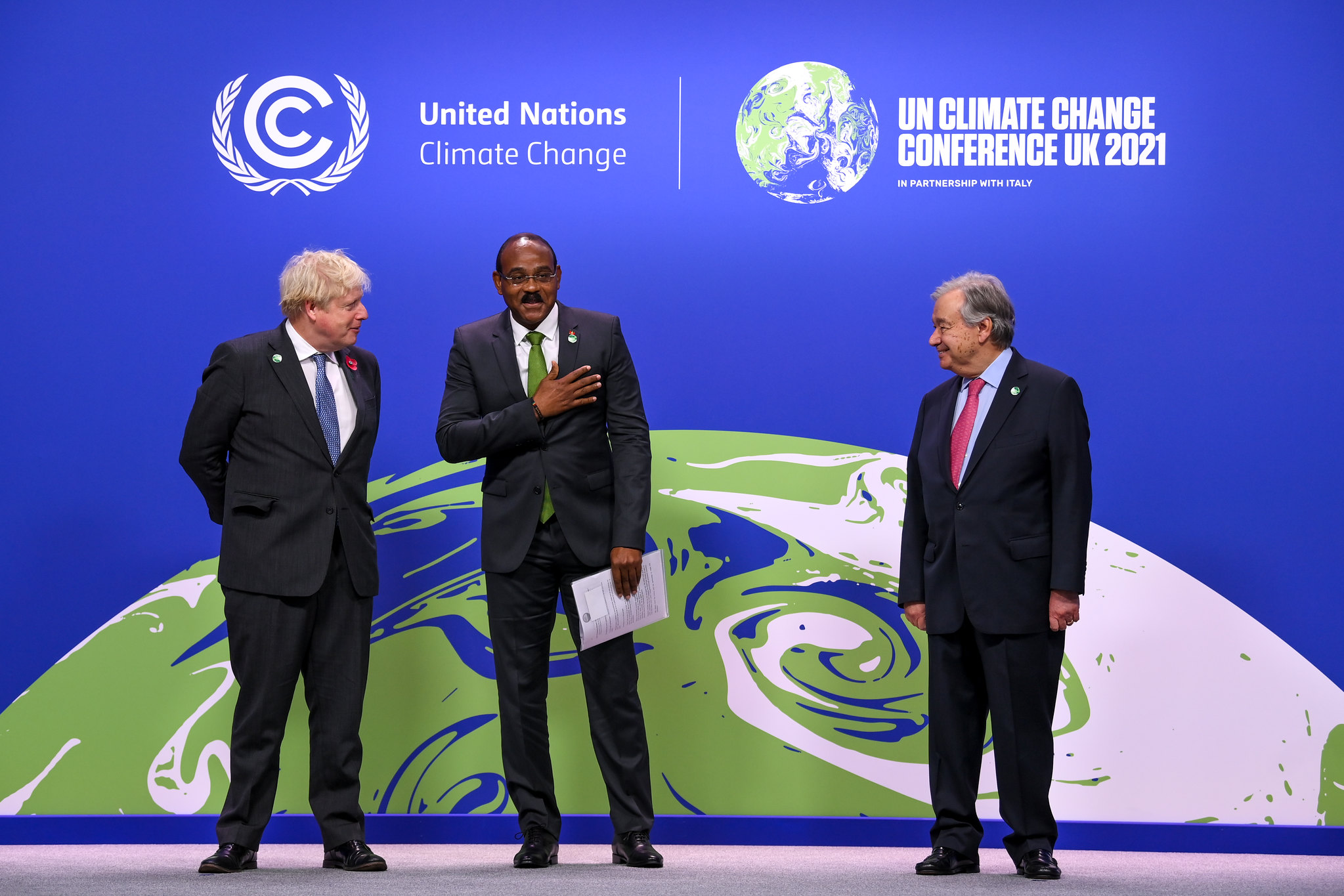 British Prime Minister Boris Johnson, Prime Minister Gaston Browne of Antigua and Barbuda, and António Guterres, Secretary-General of the United Nations, greet one another on arrival at the COP26 World Leaders Summit of the 26th United Nations Climate Change Conference at the SEC, Glasgow. Photo by Karwai Tang/UK Government via the COP26 Flickr page, CC BY-NC-ND 2.0.

This post was originally published at Friedrich Ebert Stiftung through Climate Tracker‘s COP26 journalism fellowship. An edited version is republished here with permission, as part of Global Voices’ coverage of COP26.

In 2017, Hurricane Irma reduced the tiny Caribbean island of Barbuda to “literally rubble,” forcing the entire population of 1,400 residents to be evacuated to their sister island, Antigua. The recovery needs assessment led by World Bank Group concluded that Irma, combined with another hurricane, Maria (which struck Antigua shortly afterwards), would cost the twin-island nation 377.2 million United States dollars in damages, losses and recovery needs—a bill amounting to 25 per cent of the country’s gross domestic product (GDP) that year.

The destructive capacity of Irma, which made landfall in Barbuda as a Category 5 storm, was likely intensified by warmer waters in the Atlantic Ocean caused by climate change.

Antigua and Barbuda—together with all the Small Island Developing States (SIDS) of the world—emit less than one per cent of greenhouse gas emissions (GHGs); yet, there is no active mechanism in place for holding the world’s largest emitters accountable for recovery efforts through the United Nations Framework Convention on Climate Change (UNFCCC).

What is more, the Organisation for Economic Co-operation and Development (OECD) rules stipulated that Antigua and Barbuda was too rich to qualify for most aid grants needed to rebuild and repopulate Barbuda post-Irma.

“Immoral and unjust” is how Mia Mottley, the prime minister of Barbados, branded the failure to deliver critical loss and damage funding to small islands, when addressing the participants of the World Leaders’ Summit at COP26. She added that the toll of the climate crisis for SIDS was being measured in “lives and livelihoods.”

With current emissions trends, small islands face an existential threat. The Emissions Gap Report shows that even if each country met its Nationally Determined Contributions (NDCs) under the Paris Agreement, the world’s average temperature would still increase by 2.7°C, compared to pre-industrial levels, by the year 2100. A separate special report by the Intergovernmental Panel on Climate Change (IPCC) demonstrates that this half-a-degree difference is, indeed, a matter of life or death for SIDS.

In light of this, Antigua and Barbuda decided to kick off COP26 with a big, bold move made in collaboration with Tuvalu, a Pacific island nation that is disappearing as a result of sea-level rise and coastal erosion. The two islands announced a platform to hold big emitters legally accountable for loss and damage from extreme weather.

With Barbuda still reeling from the effects of Irma five years later—a fact acknowledged by President of COP26, Alok Sharma, during the opening plenary—its prime minister, Gaston Browne, came to COP26 with an ambitious plan: to hold polluters accountable.

On the day of the World Leaders Summit, he joined the Prime Minister of Tuvalu, Kausea Natano, to launch a commission that would investigate legal ways to hold large emitters responsible for the loss and damage experienced in their home countries and other SIDS.

“The polluter must pay,” he said, clarifying that the statement was not intended as an act of aggression. Discussions about loss and damage, however, are a sensitive topic for small islands, experts said.

“For a long time, developed countries have resisted any effort to recognise loss and damage, because of the liabilities and potential claims for compensation that might emanate from that,” said Colin Young, Executive Director of the Caribbean Community Climate Change Centre (CCCCC).

He credited the Alliance of Small Island States (AOSIS) and Caribbean negotiators for the inclusion of Article 8, which addresses the issue of loss and damage, in the Paris Agreement. However, the absence of any mention of developed nations accepting liability was a result of compromise.

According to Young, the critical issues at COP26 for small islands are limiting global warming to 1.5°C above pre-industrial levels; securing climate finance for adaptation; finalising the Paris rulebook, and creating a loss and damage fund.

Speaking at a high-level COP26 side event at the AOSIS Pavilion, Tuvalu Minister of Finance, Seve Paeniu, said that such a fund would need to be accessible to the most vulnerable countries on the frontline of the climate crisis. “This is critical because even with the current funding mechanisms, such as the Global Climate Fund, a number of the SIDS have taken years just to access that global fund,” Natano said.

One developed country that has taken a public leadership role in advancing loss and damage is Scotland. At COP26, the country announced a donation of 1 million pounds (US $1,340,990) to a prospective loss and damage fund.

“It’s an issue of climate justice,” Young said. “We [SIDS] are not the cause of this problem we're suffering. So when a country like Scotland shows global leadership and is a first mover in putting a million pounds to loss and damage, it is significant,” he added.

As small as this amount may seem, according to the largest conglomerate of climate NGOs, Climate Action Network (CAN), it was the first time that a developed nation had embraced the term “loss and damage” and the associated implication of liability. Scotland is “setting a precedent that the richer nations must follow,” CAN said in a statement.

This sentiment was shared by Caroline Mair-Toby, director and founder of the Caribbean Institute of Small Islands, who considered the gesture noteworthy, especially considering that Scotland is not an independent country. “The fact that they are not obliged to do this starkly highlights the reluctance of countries that are wealthy and fully capable,” she said.

Professor Payam Akhaven, the lawyer who will lead the commission on behalf of Antigua and Barbuda and Tuvalu, told Climate Tracker that this step by Scotland was a “reflection of the growing recognition that climate change is the consequence of deliberate conduct causing harm.” This, he said, was proof that climate change must be framed in terms of damages.

Antigua and Barbuda currently serves as chair of AOSIS; however, the commission launched with Tuvalu is independent of AOSIS and will seek to garner support from other AOSIS members over the coming months.