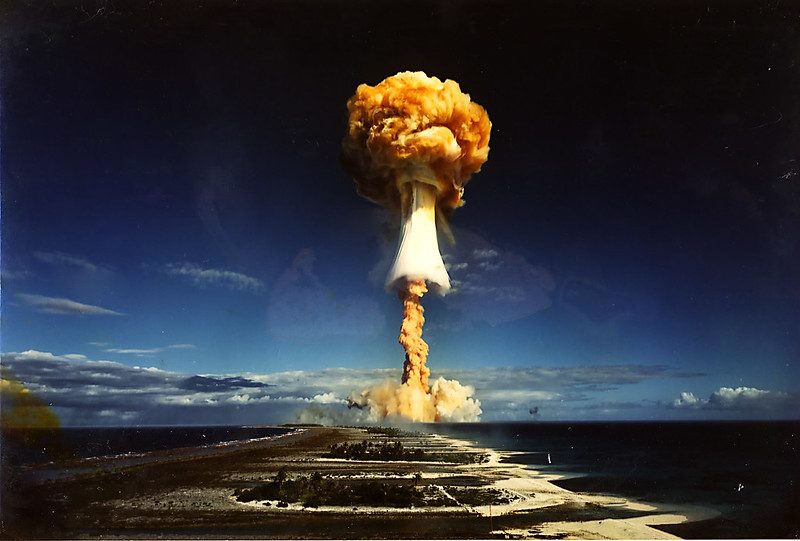 This is the third picture of a series of the Licorne thermonuclear test in French Polynesia. This is a scan of a (digitally restored) hard copy of a picture taken by the French army. Photo and caption by Flickr user Pierre J. (CC BY-NC-SA 2.0)

More than 1,000 people gathered in the Tahiti capital of Papeete to condemn the failure of the French government to take full accountability for its nuclear testing program in the South Pacific.

France conducted 193 nuclear tests from 1966–1996 in Mā’ohi Nui (French Polynesia). France's 41st nuclear experiment in the Pacific led to catastrophe on July 17, 1974, when France tested a nuclear bomb codenamed “Centaure.” Because of weather conditions that day, the test caused an atmospheric radioactive fallout which affected all of French Polynesia. Inhabitants of Tahiti and the surrounding islands of the Windward group were reportedly subjected to significant amounts of ionizing radiation 42 hours after the test, which can cause significant long-term health problems.

The July 17, 2021 protest was organized under the banner of #MaohiLivesMatter to highlight the continuing fight for nuclear justice. Campaigners said that despite the statement of former French President François Hollande in 2016 recognizing the negative environmental and health impact of the nuclear tests, the French government has done little to provide compensation or rehabilitation to French Polynesia.

In Tahiti, the Tavini Huiraatira no Te Ao Maohi party joins church and community organisations to rally for “#MaohiLivesMatter!” French President #Macron will make a long-delayed visit to Tahiti between 24-27 July and many want him to address legacies of 193 French nuclear tests. pic.twitter.com/93UJgGhUtz

After analyzing 2,000 pages of declassified French military documents about the nuclear tests, in March 2021 a group of researchers and investigative journalists from INTERPRT and Disclose released their findings on the health implications of the experiments.

According to our calculations, based on a scientific reassessment of the doses received, approximately 110,000 people were infected, almost the entire Polynesian population at the time.

The report has revived public awareness in France about the impact of their nuclear testing program. The French government held a roundtable discussion about the issue in Paris in early July. Though some criticized the French government for their alleged lack of transparency around the clean-up efforts in French Polynesia, officials denied these claims.

Protesters in Tahiti insisted that the French government should do more to address the demands of French Polynesian residents. Some noted that if French President Emmanuel Macron was able to seek forgiveness for the role of France in enabling the Rwanda genocide in 1994, he should at least make a similar apology for the harmful legacy of the nuclear tests in the Pacific.

The #MaohiLivesMatter protest has inspired solidarity in the Pacific.

We stand in solidarity with the 1000s of people who marched in French Polynesia to commemorate the day when fallout from a nuclear test covered their islands, and demand ?? accept responsibility for the damage caused ?https://t.co/fH1F8seNPp (1/2)#nuclearban #MaohiLivesMatter pic.twitter.com/Azt64zri63

Community leaders of West Papua expressed their support for the protest:

As you gather in Maohi Nui on the 17th July we offer our deep respects to your leaders and community members who have long spoken out against the harms imposed by these weapons. We have heard your calls for nuclear justice. We continue to listen closely when you speak of the lived experience of the testing years and the on–going harms.

French President Emmanuel Macron is expected to tackle the legacy of nuclear testing during his visit to Tahiti this month.