These African animators are saving their native languages using cartoons

Four animations by African creators will air on US platforms 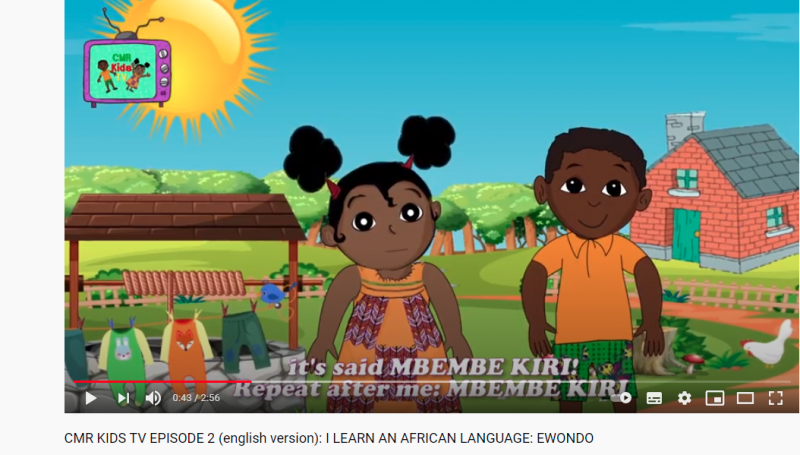 A YouTube screenshot of CMR KIDS TV, a TV channel on YouTube that teaches young Cameroonian children about their culture and history as well as languages such as Ewondo and Dioula.

Disney+ and Cartoon Network, two major US animation platforms, announced last month they will air four productions by African creators. This comes on the heels of similar announcements by streaming giants like Netflix and Youtube Originals, indicating a demand for representation and homegrown narratives among African audiences amidst a global market boom for animated content.

The first new production is “Kizazi Moto” (which means Generation Fire in Swahili), an animated 10-part collection of Afro-futurist anthology films that explores Africa’s future. It will include stories by creators from six African countries.  The second, “Kiya and the Kimoja Heroes” is a pre-school series that centers on a 7-year-old African girl who loves ballet and martial arts. When she and her two best friends put on their magical crystal headbands they become superheroes ready to defend their community. “Kiff,” a 2D-animated comedy from South African creators is about an optimistic squirrel and a laidback bunny. Finally, “Garbage Boy and Trash Can,” Cartoon Network Africa's newest superhero-comedy series is about a boy with imaginary superpowers who fights for justice with his trusty sidekick.

While this representation is a huge victory, many African animators’ quest for representation goes beyond just having characters who look like them. Animation has also become a tool for preserving endangered African languages. Through entertainment, these creators are hoping to use animation as a vehicle for African mythologies, philosophies, rich traditions, cultural expressions, and languages.

Over 300 African languages are endangered

The African continent hosts roughly one-third of the world’s approximately 7,000 living languages. Due to the relentless dominance of international languages such as English and French, native languages are increasingly coming under threat.

In 2018, UNESCO reported that over 300 African languages are endangered and more than 52 have become extinct.  The report also stated that, if young people are not taught these languages, even more are likely to go extinct. Of the 230 languages around the world that have gone extinct since 1950, 37 were in Africa.

According to an article by Quartz discussing Yakunte — a dying language in Kenya that is now only spoken by seven people, all over 70 years old — African languages are especially vulnerable as governments adopt official languages while discouraging local ones, in hopes of forging a more unified national identity.

Despite its high linguistic diversity, English and French, both International languages, are the predominant official languages for most African states.  Somali, Berber, Wolof, Oromo, Igbo, Swahili, Hausa, Manding, Fulani, and Yoruba are African languages which though spoken by tens of millions of people are considered as local and only a few are official at the national level.

Can African animators change this tide?

While English is still the dominating language in the global animation market, largely due to Disney’s ubiquity,  Kiswahili has been gaining status as an alternative language for African audiences.

Disney’s 1994 animated feature “The Lion King” is perhaps the most popular Western film featuring Kiswahili according to an article titled “The (Mis)Use of Kiswahili in Western popular culture“ by ThisisAfrica. A Disney spin-off series titled “Lion Guard” (premiered in 2015) has since elevated the status of Kiswahili as the go-to African language in animations.

Since then, African animators have gone on to successfully incorporate Kiswahili into their production dialogue, animated films, or series titles. Some of these include: “Super Sema” — Africa's first children's superhero animated series co-produced by Kenyan Lupita Nyong’o; “Akili & Me“ produced by  Ubongo Kids; and “My Better World.”

During an interview with litnet.co.za, Chris Morgan, founder and creative director of Fundi Films, and the series producer of “My Better World” had this to say:

Despite the scarcity of formal training opportunities, locally-made productions are already starting to take off.  It was important to have real diversity in our characters so that the series could work in different parts of our continent. We reviewed each stage of development with teams in Ghana, Nigeria and Kenya – these same reviewers guided our script-writing process.

Animation is an effective way to teach young Africans life skills and languages that are often not taught in schools. There are a number of animation shows hoping to fill this gap.

From Western Africa, there is “Bino and Fino“ — an educational children’s cartoon created by Nigerian Animator Adamu Waziri which launched in 2010. The characters — Bino and Fino are a brother and sister who learn African history and culture with Zeena a magical Butterfly. The cartoon is broadcast across 15 countries in English, Twi, Yoruba, German, Dutch, Portuguese, Hausa, Igbo, French, and Swahili and is also available on YouTube. The Anilingo Series by “IyinCreative” is also another animation from Nigeria promoting and preserving the African cultural heritage.

Meet Bino and Fino, a brother and sister who go on adventures with their magical butterfly Zeena and learn all about Africa and the World! Watch at https://t.co/xESBCQtYFa and on batteryPOP’s FREE Cartoon Roku Channel. #binoandfino pic.twitter.com/tWBmCbEBiR

“Ẹbí Fọ́lọ́runṣọ́“ is another animation series that teaches the Yoruba language commonly spoken in Nigeria created by Finland-based, Nigerian born Kayode Oloko. The show campaigns to raise awareness of the culture, tradition, language, and identity of all Yoruba kids from Nigeria  He discussed his initiative and the inspiration in an interview with Pan-Africa.net.

In Nigeria today, many parents prefer their offspring to speak the English language over their own native language. It’s a sad reality that future generations could lose their identity and purpose, a heavy price to pay for living in a host country.

From Central Africa, there is CMR KIDS TV, a TV channel on YouTube that teaches young Cameroonian children about their culture and history as well as languages such as Ewondo and Dioula.

In Eastern Africa, Tsehai Loves learning is another animation worthy of note.  The Ethiopian children’s education platform is available in seven local languages and focuses on providing critical information on literacy, health, and social and emotional learning to young children.

In Southen Africa, YouTube features shows such as Zulu Kids songs and Xhosa kids. Unlike other African countries where only one local language is recognized as a national language, South Africa has 11 official languages — 10 of which are indigenous to the country.

As Africa jostles, for a place at the global animation table, it is also on the cusp of becoming the next animation hotspot through ongoing efforts to create an original voice and look. But support and ownership by African governments are still elusive. According to The Association for the Development of Education in Africa (ADEA)

The need for government interventions and support for comics and cartoons becomes necessary since these are strategic media to relate with younger generations in this millennium.