Tunisians left to themselves to fight COVID-19

Crumbling healthcare system is pushed to the limit 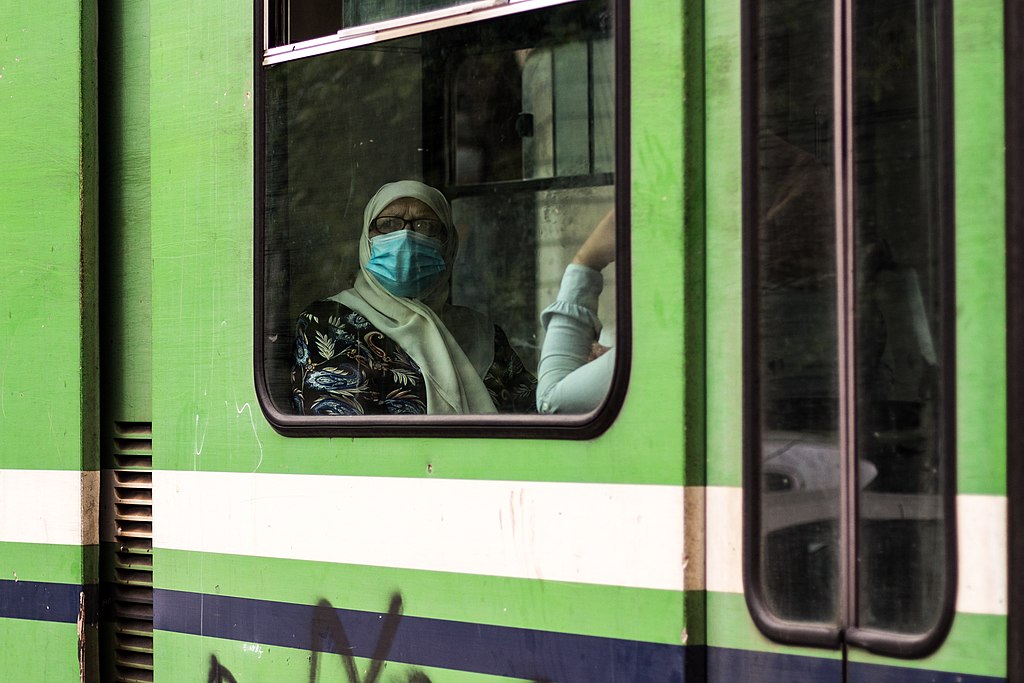 A woman in the subway in Tunisia during the COVID-19 pandemic. Photo by Brahim Guedich CC BY-SA 4.0

Since April, Tunisia has faced a sharp rise in the number of COVID-19 cases and deaths. The Ministry of Health described the health situation as “very dangerous” with hospitals being at almost full capacity. To flatten the curve, the authorities—again—announced new containment measures that include a national curfew, school closure, travel restrictions. But few believe it will be enough.

Unlike wealthy countries, there are no relief schemes to support workers and businesses to stay afloat. With unemployment already high and the cost of living skyrocketing, the most vulnerable have barely received ad-hoc small state assistance, and people are left to fend for themselves to survive. Therefore, the prospect of catching the virus is less of a concern than the necessity of carrying on and making a living.

Though Tunisia imposed a stringent lockdown at the onset of the pandemic and for a while kept the spread of the virus low at a high price for the economy, there is now a wide feeling of powerlessness and fatigue. “If I don’t go out and work who is going to give me money?” asked Salah, a Tunisian builder who, like the majority of workers, relies on daily earnings.

Unable to respond to the demands of the population and drowned in their own political disagreements—Tunisia has had nine governments in 10 years since the revolution—there is complacency at the top. The authorities are not enforcing COVID-19 measures: political rallies have continued to gather large crowds flouting health protocols; social distancing and masking are ignored; cafés and markets are crowded. Digitalisation having lagged, many office and administrative work is still done on-site using hard copies.

Since independence in 1956, Tunisia has heavily invested in its infrastructure. The public health system grew rapidly to provide universal health coverage that used to be the pride of Tunisians. But in the Nineties, corruption, deregulation in favour of the private sector resulted in a downward spiral of deterioration of public health services. It has only worsened throughout the years.

Wakkas Mejdi, a medical intern told the Anadolu Agency that “the health sector is now in crisis not only because of the pandemic but also due to many infrastructural problems which have remained unresolved in recent years.” 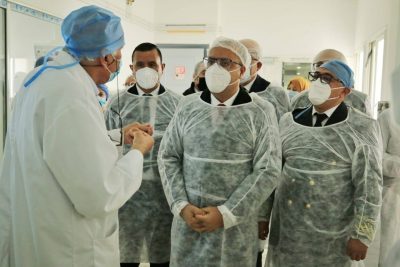 Tunisian Prime Minister Hichem Mechichi visiting a hospital in Sousse in December 2020. Photo from the official Facebook page of the Presidency of the Government of Tunisia, Public Domain.

In 2014 and 2018, medical professionals launched two general strikes after scandals at hospitals that took the lives of 15 newborns babies and the death of a young doctor in a lift accident. Prime Minister Hichem Mechichi pledged at the end of December 2020 the creation of a national body for public health reform. But it is an issue that will take a long time to fix.

In the meantime, Tunisians who can afford it are turning to a largely unregulated and mushrooming private sector for treatments.

Private health care for those who can afford it

COVID-19 has exacerbated the dysfunction of the public health care system. It starts by being able to access a COVID-19 test. While the WHO’s director recommended testing at the onset of the pandemic, Tunisia has never had enough testing capacity.

If, in theory, PCR tests are free at public hospitals, there are not enough tests available in reality. Most people will not be able to be diagnosed. The private sector is called to fill the gap but with a high price tag that is unaffordable for most Tunisians. At the beginning of the pandemic, some laboratories were charging 400 dinars (145 United States dollars) for a PCR test which is almost the equivalent of the Tunisian monthly minimum wage. The government intervened to cap it at 209 dinars ($76) and then to reduce it further to 170 dinars ($62). 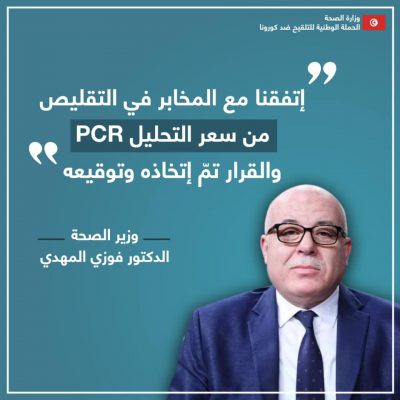 Tunisian Ministry of Health Facebook announcement with photo of Health Minister Dr. Faouzi Mehdi and a quote, “We agreed with laboratories to reduce the cost of PCR test.” Public Domain.

At this price tag, it is unlikely many people will get tested. Mainly travelers are taking the test as more and more countries require negative PCR tests for entry. There have been numerous stories of test results trafficking—people buying forged certificates at a cheap price on the black market. The government has clamped down on the traffic, now requiring laboratories to have a QR code on test results.

Tunisia's lack of testing is in stark contrast with most wealthy countries, where testing is free and at the center of their recovery strategies. For instance, the UK and France will offer free rapid COVID-19 tests when lifting their lockdown.

Tunisians are caught between a poor-quality under-resourced health care system and a prohibitive private sector. There has been pressure to demand—as in times of war—the requisition of private clinics if public hospitals are at saturation point. Last October 18, Prime Minister Hichem Mechichi announced that “patients of COVID-19 who cannot find a place in a hospital will be treated in a private clinic at the government's expense.“ But this has still to materialise. Patients must still foot the bill. According to the secretary-general of the Union of Liberal Specialist Physicians (UMSL), the cost of hospitalisation for COVID-19 in private clinics is about 45 thousand dinars ($16,375) per patient. Some families have had to sell property and belongings to save their loved ones. The poorest are trying to treat themselves alone at home using self-medication and traditional medicine. Consequently, many arrive too late at hospitals that are often crowded and unhygienic. Since COVID-19 affects lung function, oxygen is a crucial treatment for many patients, but as cases of this disease surge, many Tunisian patients are turning to an unregulated black market to breathe, and social media feeds have become helplines for medical supplies on behalf of the sick.

Vaccines and lack of trust in the authorities

Prohibitive treatments, patients outside the system, and a private sector working alone in parallel mean that official figures are likely to be underestimated and only a fraction of the reality. Awash with personal anecdotes but short on reliable data, tackling COVID-19 blindly without rigorous information will only complicate the public response.

The vaccination campaign started over a month late, in March. Tunisia received vaccinations through the World Health Organisation’s COVAX scheme, as well as from Russia, the U.S. and China, and aims to vaccinate over half of the population by the end of the year. An online platform, evax.tn, has been created for people to register for the jab. But general pessimism and distrust in the authorities have slowed down the vaccination.

To succeed in what UNICEF described as “one of the largest mass undertakings in human history” will require general local mobilisation and solidarity engaging with local civil society, the private sector, religious leaders. At the global level, the sharing of vaccines, medical equipment and protection gear, as well as the distribution of low-cost tests, should be a priority for wealthy governments. Because ultimately, we are all in this together, and only in uniting our efforts, can we overcome this unprecedented crisis.