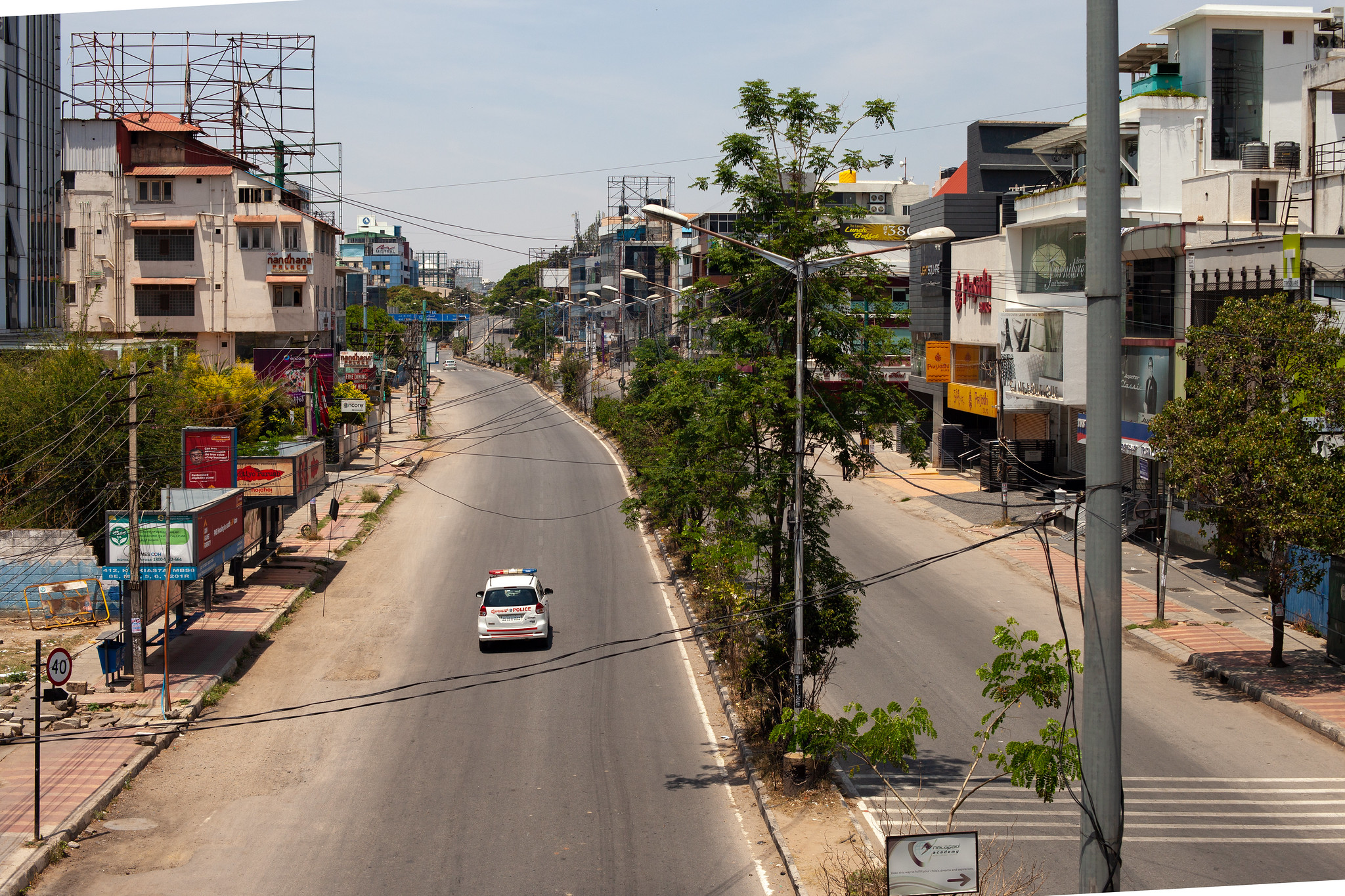 Last month was not a good one for the world. While some nations were becoming vainglorious and relaxing in environs of vaccine success, surplus and stockpiling, others such as India and Brazil were seen as collapsing under the onset of a huge second wave of the COVID-19 pandemic, now much worsened by the strong surge of new varieties. It is still not clear whether such new variants are both more fatal to mankind and more resistant to existing vaccines.

That the Western media have been generally triumphalist is perhaps the better way of describing the Anglophone press based in the U.S.A. and U.K., where democratic regimes are emerging from the anxieties of failed policy responses to bask in the relative peace of vaccine safety. In richer nations, the major broadsheets and broadcasts are now filled with questions as to which countries may be visited first on summer holidays or when undergraduates may finally get their due quantum of actual live and lively lectures and discussion groups in which they may study in perhaps more hallowed grounds than their own living rooms. The new mood is working on the electorates—the awful policy regimes of British Tories and American Republicans seem to be all but forgotten in today’s civil society responses, thus the easy ambitious spending of Biden and the massive electoral triumphs of Johnson.

But, of course, much truth lies buried. Table 1, which fastens on to the large outbursts of COVID-19 cases during two weeks of April (4-10 and 20-26) among the top 10 nations of the viral onslaught, provides some more systematic insights. 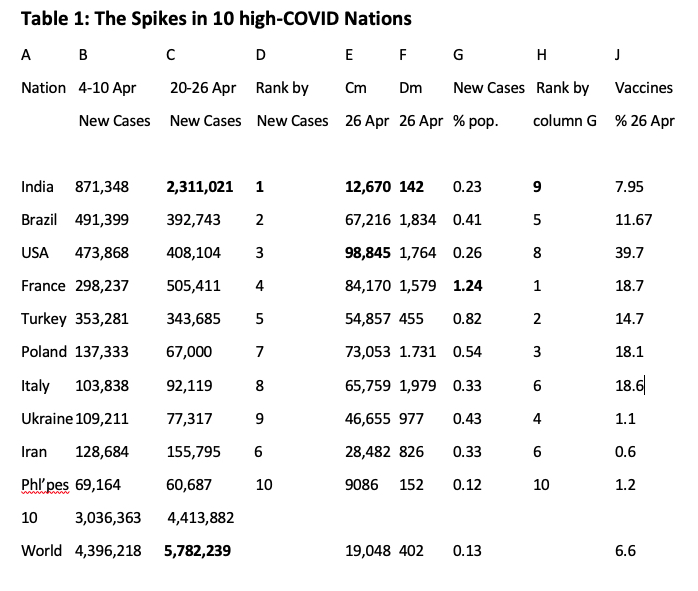 Column D shows the ranking of 10 nations with the greatest spike in cases, India being at a firm ranking of 1, with the Philippines at the bottom with a ranking of 10. This is the data expressed frequently by print and social media in most places. Note that the Western media, in particular, are quite happy at repeating this basic numerical data based on Columns B and C ad nauseam and seem to quibble only when some further processing is done and the story becomes a little more nuanced, more based on global realities.

The truly horrible figure is for India at Column C with the enormous figure of 2.3 million new cases in just one week. This is where the Western media have settled, dwelling on broken-down facilities, mass overcrowding and attendances at traditional religious gatherings, the need for aid from the rich Western nations, the insufficiencies of the top levels of Indian governance, the failure of Indian democracy to save its civil society. Running the eye down Column C does alert us to the serious position of the U.S.A., the third worst-situated nation on these crude figures. But note that Brazil’s new cases, second highest, seem quite far removed from India’s greater disaster, with total figures for the two weeks only 28 per cent those of India, on a par with the U.S.A., just a little worse than France.

Columns E and F remind us of the longer-term context, the cumulative effects of more than a year of COVID-19 attack. Column E gives the number of cases per million for each nation since the beginning of the pandemic. We immediately see the huge impact of contrasting demographics and how little even a large spike in numbers alters that power in the short term. Thus, the COVID-19 cases per million by April 26 (the end-date for this analysis) for India stand at only (Column E) 13 per cent those of the USA, 15 per cent those of France, 19 per cent those of Brazil. They remain only 66 per cent those of the world average (bottom row). This does not remove unhappiness, hunger or terror from the lives of millions of Indian people, but it does serve to discount the Western implication that Indian democracy and civil society have failed in the last analysis to match the achievements of the richer nations. And this is not the last analysis.

We get further when we move to Column F, the deaths per million from COVID-19 in each nation.  Apart from the Philippines, a nation of around 111 million people, no nation on the list can match the low number of deaths recorded in India. At what point do we reject the registered data? India as unable to record accurately or wishing to reduce its “failure” and thus its regime's culpability? How are we to go? To loudly announce the figures when they look like Columns B and C, to suddenly query them when they are logically processed into Columns E and F?

If Western commentary on this pandemic is to attain any veracity it must be faced with the need to frame the debate fairly and in a manner whereby the world might learn something for the future. If we are to accept the dramatic pictures conjured up in the press then the logic of this is to accept that democratic, flawed, and wounded India is a great nation—among many others—standing up to an onslaught as best it can, given its initial circumstances and its initial advantages of a high proportion of youngsters and a low proportion of older citizens (which meant that this particular virus would not so readily bite into the lives of as high a proportion of Indian people as has been the case in the West). This is still reflected in Columns E and F for nations such as the U.S.A. and France and Italy

Much of this is brought home when we do the obvious and total the two weeks of high-spike Covidity as a proportion of total populations in each nation, which is done in Columns G and H. Here we see France ranked now as the worst case of new COVID-19 cases in this period, leading Turkey and Poland as the truer triangle of disaster than the one suggested in Column D. Followed by the Ukraine and Brazil, we now have a ring of nations with little in common other than very high spikes of COVID-19 cases during April of 2021. India now joins the Philippines at ranks 9 and 10, the lowest high Covidity among this grouping.

This finding covers both a wide spectrum of cases and a huge number of cases, some 69 per cent of the total world new cases for these two weeks. We see that France, Turkey and Poland appear to have been hit very hard in comparative demographic terms, and that India, in particular, was very hard hit in purely absolute numerical terms, but emerges as Number 9 in a ranking that takes fuller account of the population size of nations.

None of this will stop triumphalism, especially that associated with the new vaccines and their effective distribution. Column J shows that while high vaccination levels in the U.S.A. by April 26 may well have helped slow down cases and deaths by this time, it did not stop the U.S. virus surge nor lower its high place in the Cm and Dm figures of Columns E and F. But it has undoubtedly strengthened the hand of new president Joe Biden and his awful Trumpian echo of “The future belongs to America.” The more measurable positive effect in Britain presently powers the forward advance of the Tory movement and strengthens the grasp of Boris Johnson over his cabinet and detractors within the government. And, of course, the reality is that on April 26, the British statistics for total COVID-19 cases per million since the start of the pandemic remained at 64,639 or some 3.4 times that of the world average, over 5 times that of India. In terms of fatalities, the British Dm of 1,869 was 4.6 times that of the world average, 13.2 times that of India.

The real message of the high figures of April is that while vaccine success may wipe out the negative political impacts of COVID-19 mismanagement in nations such as the U.K., the U.S.A., France, Italy, and so on, the continued failures of such nations to effectively aid vaccine usage in poorer nations will extend the pain of the poor. East Asia, the region that has managed things best of all, should before now have stepped in both with vaccines and with virus-fighting aid through drugs, oxygen supplies, dispersal of skilled nurses and auxiliaries, and the institution of short training courses to ensure effective dispersals, especially among the active and often little affected young folk of small towns and villages. They are the nations that know these things best, have much to gain through action, and might have stimulated—if only through global guilt—the actions of others in Europe and North America, Australia, and elsewhere. It would have been the best forerunner for planning a new world commercial order as the pandemic loosens and East Asian muscles flex.

Instead, one major impact of the present, often wilful, misreading of the known data will be to continue the move away from effective democratic processes in Europe and the U.S., to hasten the decline in underlying productivity within democratic economies, and to boost populism that puts one-line rhetoric well ahead of informed discussion.