From child refugee to journalist: How Liberian Tecee Boley paved her own path in media 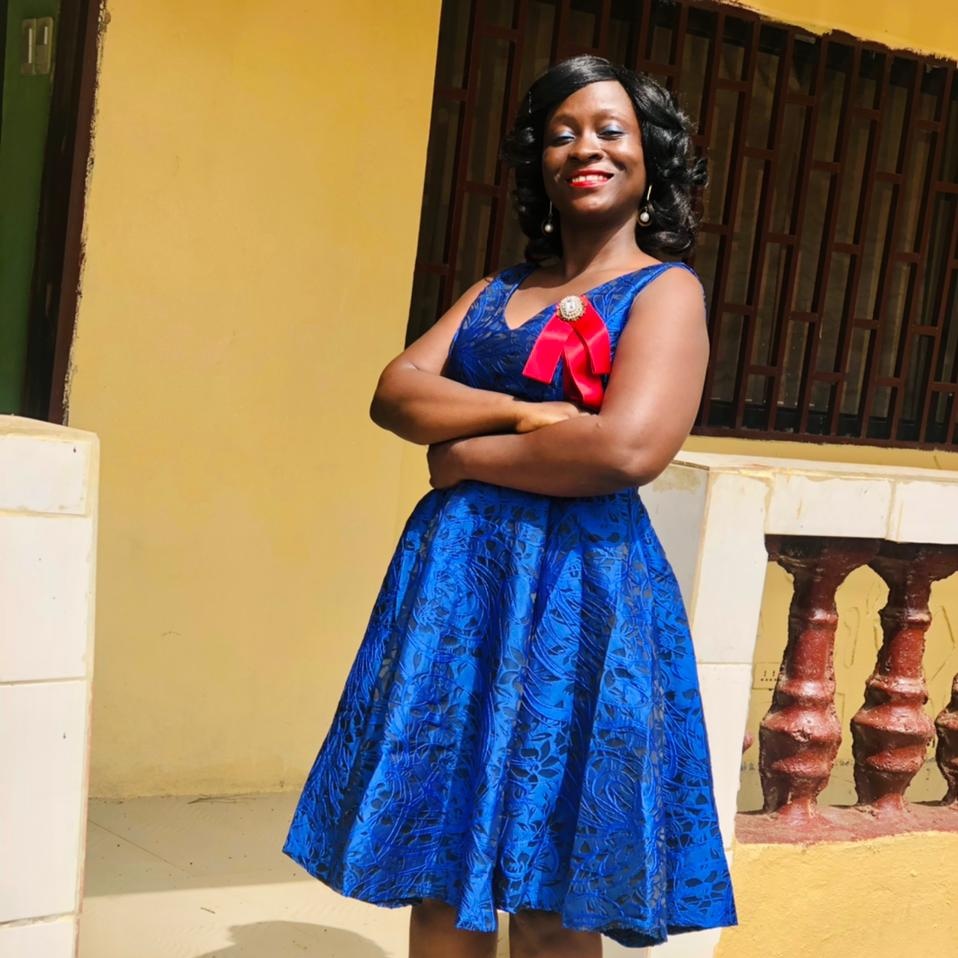 It took many years for women journalists in Liberia to take on leadership positions as editors, directors of news, and managers. Editors would often tell them, “This area is not for women,” or “That is a man’s beat (assignment), so women cannot go there,” according to Liberian journalist Tecee Boley, 36, who has worked in print and digital media as a reporter for a little over sixteen years.

As of 2016, women were only 13 to 16 percent of media practitioners according to the Internews report “Women and the Media in Liberia: The Uneven Course.”

At first, women were only used as reporters limited to some assignments, like DJing or reading announcements between breaks, until recently when women started advancing themselves educationally and taking on the challenges to go toe-to-toe with their male counterparts in the newsroom and other sectors in Liberian society.

Boley is one of many female journalists in Liberia who has faced these barriers. But she reached the top of her profession not because she sat down waiting for someone to babysit her. Boley, who lives in Monrovia, Liberia, has written for World Policy Journal, Reuters, World Vision Report, and United Nations Radio, now ECOWAS Radio.

Boley studied Journalism and Media Studies at Wits-University of Witwatersrand. In 2013, she earned a degree in Economics at the United Methodist University (UMU). She also holds an accounting degree from the Stella Maris Polytechnic.

From child refugee to journalist

Born December 25, 1984, just years before civil unrest would break out, Boley did not enjoy her childhood like many other children in other parts of the world. This was because she and her parents were running from being killed by rebel groups who ravaged the country during that period.

“I lost my father to the war,” she told Global Voices in Monrovia as she recalled her childhood. Her father died due to the conflict that targeted certain tribal groupings in Liberia.

Liberia has had two periods of civil unrest, which led to the killing of hundreds of thousands of Liberians and the looting of properties.

The First Liberian Civil War was an internal conflict from 1989 until 1997. The ethnocultural antagonisms between and among the ethnic groups Gios, Manos, Krahns and Mandingos led to the first civil war in that West African nation.

The conflict officially ended in 1997 after military intervention by the Economic Community of West African States (ECOWAS) and United Nations. This led to a ceasefire and a peace deal, after about 150,000 civilian deaths and 850,000 refugees were displaced into neighbouring countries.

The second Liberian Civil War began in 1999 when a rebel group, Liberians United for Reconciliation and Democracy (LURD), emerged in northern Liberia to fight against the government of Charles Taylor, who was elected president at the end of the first conflict. Then, another rebel group, the Movement for Democracy in Liberia (MODEL), emerged in the south in 2003, launching another challenge to Taylor's rule.

Thousands of people were displaced in what has become known as the Siege of Monrovia in 2003 when the rebel group LURD fought with government forces in the capital.

Women and children were used as combatants. Those who were fortunate to flee to neighbouring countries did not spend their childhood as normal children would during the days of peace. This is the story of Boley.

“As a child, I saw horrible things,” she reflected, during an interview she granted me in the Liberian capital Monrovia.

She narrated that during her days as a child in refugee camps in Ivory Coast shifting from one camp to the other, she observed that only men would gather around what she then believed was a ‘box.’ Only later did she realize it was a radio and that the men were listening to BBC to ascertain what was happening back home and other parts of the world.

Boley then realized that radio was a powerful tool for advocacy and made up her mind to make the maximum use of it. She had earlier planned to take on a different career path such as a banker, doctor, or another profession a child would dream of during their early days before the conflict.

Boley said that she decided to become a journalist in the camp in Ivory Coast, when her childhood friend was raped and died of the injuries.

Boley then took up journalism to enable her to tell stories about children like her friend, and to move stakeholders to take action.

‘Go beyond what the newsmaker tells you. Dig deeper!’

During her days in active field reporting as a journalist, before transitioning to public relations, Boley worked with FrontPage Africa, one of Liberia’s well-respected newspapers as its senior reporter.

She always wears a smile across her face, but when it comes to being professional, she always meets her deadlines. As a reporter, she loves to excavate deeper.

Boley focuses her attention on thorough research. “It is good to always go beyond what the newsmaker tells you. Do your research. Dig deeper and deeper,” she said.

For ten years, Boley served as New Narratives (NN) Women’s Reporting Africa fellow. At NN, she further honed her interest in reporting on women and girls.

Motivated by the traumatic experiences during her childhood that led to the death of her early childhood friend, she broke stories on the rise of child rape and unsafe abortions, which prompted United Nations (UN) investigations into the use of child prostitutes by UN peacekeepers.

In 2011, Boley was awarded the Development Journalism Award by the Press Union of Liberia (PUL). 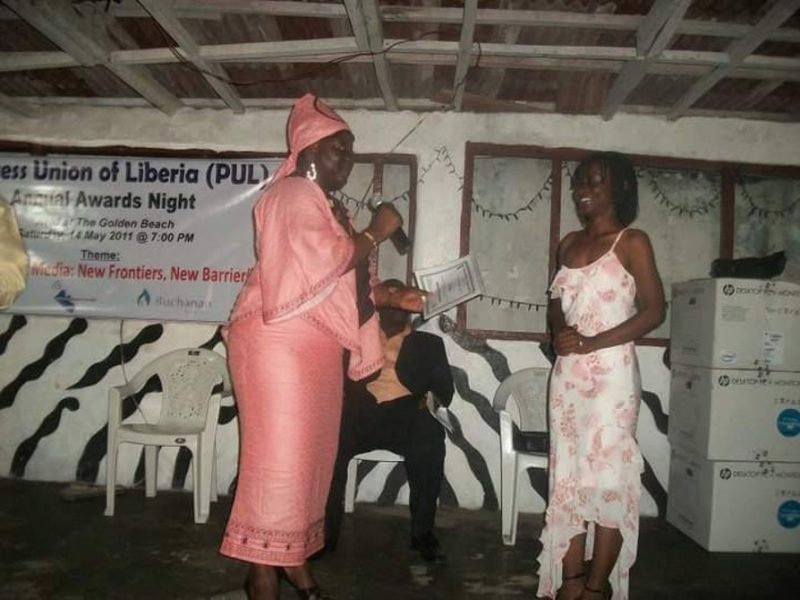 In 2011, Bolay receiving the Development Journalism Award from the Press Union of Liberia in 2011. Image used with permission.

Frank Sainworla, a media trainer and one of Liberia’s outstanding journalists spoke highly of Boley in an interview recounting their days at a Catholic radio station VERITAS, now Radio Maria.

“Tecee is well-rounded, versatile, passionate, and professionally aggressive. With a strong academic background, she is smartly able to blend theory with practice,” Sainworla said.

Friends who have worked with her have always spoken well of her especially when it comes to how she carries herself as a journalist, according to Sainworla.

As a Catholic, Boley believes in a higher power greater than everyone. She dreams of a world where people love each other and those who have perpetrated injustices against others must answer for their actions.

Boley believes in the rule of law as the panacea of solving the inequality in Liberian society. For this reason, Boley has enrolled at the Louis Arthur Grimes School of Law to serve her country as a human rights lawyer.

Boley wants to see justice for ordinary women and poor girls in Liberia to accomplish her quest for justice for her friend who was abused to death in the refugee camp years ago.