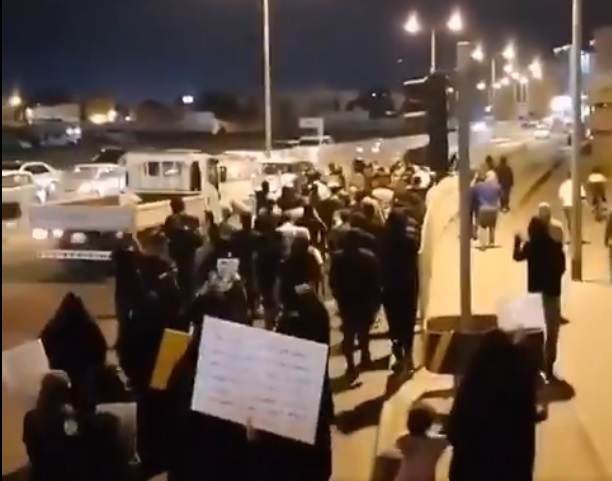 Screenshot from this tweet showing protests in Bahrain that call for the release of prisoners.

Ten years after the Arab Spring-inspired protests erupted in Bahrain but failed to bring positive change, political detainees continue to suffer amidst worsening prison conditions and an outbreak of COVID-19 among inmates.

On April 8 on Twitter, prominent Bahraini activist Maryam Al-Khawaja recounted the horrifying details of the arrest of her father, leading opposition figure Abdulhadi Al-Khawaja, exactly ten years ago. He remains behind bars to this day.

JUST CAME! They took my dad, my dads blood is still on the stairs! They hit my dad so much! They beat him and he cudnt breath

Over the past weeks, relatives of prisoners have staged a string of peaceful protests across the tiny kingdom, calling on the Bahraini authorities to reduce prison capacity in light of widespread COVID-19 infections in the facilities.

Protests have spiked in #Bahrain over the #COVID19 outbreak in Jaw Prison, which holds hundreds of political prisoners. More demonstrations were reported last week than during any other week in over a year, according to @ACLEDINFO data. https://t.co/o9esGkpiFq pic.twitter.com/H7WoPr0t35

Female relatives of political detainees took their own stand, demanding the release of their loved ones, some of whom have been locked up for a decade.

It is very encouraging to see Bahraini mothers, sisters, daughters, wives and even grandmothers leading these peaceful protests today. Bahraini women have always had a leading voice and still have an influential voice in demanding justice and human rights in #Bahrain.

The protests picked momentum following the news that Bahrain's overflowing prisons have been witnessing high rates of COVID-19 infections.

A fresh wave of protests is taking off in #Bahrain, centred around the outbreak of Covid in Jau Prison. Prisoners’ families are taking to the streets to voice their anger. Now’s a good time for the govt to release prisoners from the overcrowded, unsafe jail @jongambrellAP https://t.co/awcewD0oU6

The death of one imprisoned activist, amidst accusations of medical negligence, added fuel to the protests:

#Bahrain : Funeral of activist Abbas Malallah who died in prison – with accusations from his supporters of medical negligence – his death has further fuelled recent protests calling for prisoners to be released because of #COVID19 – #عباس_مال_الله pic.twitter.com/cmNxJqQoff

The London-based Bahrain Institute for Rights and Democracy (BIRD), which has reported on the widespread cases of COVID-19 infection in Bahraini prisons, said in a statement on March 28 that information circulated by families of inmates on WhatsApp suggested that at least 55 individuals from Building 21 of Jau Prison have tested positive for COVID-19. BIRD has been able to verify 30 of these cases so far.

Amid a major COVID-19 outbreak at Jaw prison in Bahrain, authorities have failed to take sufficient protective measures they have not distributed face masks or hand sanitizer or offered regular testing to prisoners violating their rights to health https://t.co/VWMOrNdF4e

Bahrain has seen its human rights record deteriorate as the regime clamped down on pro-democracy defenders and opposition, detaining them in overcrowded prisons, revoking their citizenship, banning them from political participation, and shutting down their platforms.

More recently, and against the backdrop of the pandemic, international pressure has been mounting on the Bahraini state to improve its human rights situation and release political prisoners, some of whom have been behind bars for more than a decade.

Today I’m asking the #Bahrain authorities to release Human Rights Defender Abdulhadi Al Khawaja from prison before his 60th birthday next week. He has been in jail for 10 years @bahdiplomatic pic.twitter.com/rpWJ9BvCyH

Last month, 14 members of the British Parliament criticized their government for continuing its support of the Bahraini regime and urged Foreign Minister Dominic Raab to exert pressure on Manama to release political prisoners held for the last decade.

The European Parliament also adopted a resolution in March that called for the immediate and unconditional release of Abdulhadi Al-Khawaja, as well as “all those imprisoned solely for peacefully exercising their right to freedom of expression, peaceful assembly and association.”

In what seemed like a response to this pressure, on April 2, according to the official news agency Bahraini authorities found 126 prisoners eligible to benefit from the Alternative Penalties and Procedures Law. Quoting assistant attorney general Chancellor Wael Boallay, the report said that this batch brings the total number of convicts to benefit from the law to 3,224.

The law, which was passed in 2018, provides alternatives to prison terms such as electronic surveillance, restraining orders and prohibiting the convict from accessing specific places.

In a January report, Human Rights Watch said that “unsafe health and hygiene conditions in Bahrain’s overcrowded prisons remain extremely serious,” adding that prisoners are also denied adequate medical care. The watchdog also noted that the 1,486 prisoners released by Bahrain's government in March 2020 due to the pandemic did not include opposition leaders, activists, journalists, and human rights defenders, “many of whom are older and/or suffer from underlying medical conditions.”

Domestic and global pressure yielded success for some.

Fantastic news for Jawad and his family (and hopefully a sign that more releases could be on the way). pic.twitter.com/JqNWTXYmgS

Two members of the European Parliament, Maria Arena and Hannah Neumann, issued a joint statement on April 8. The statement read:

As Muslims around the world prepare to celebrate the holy month of Ramadan with family and with loved ones, we can but call on the authorities of Bahrain to show mercy to Mr Al-Khawaja by allowing him to reunite with his family.