Women have become an easy target in Pakistan media 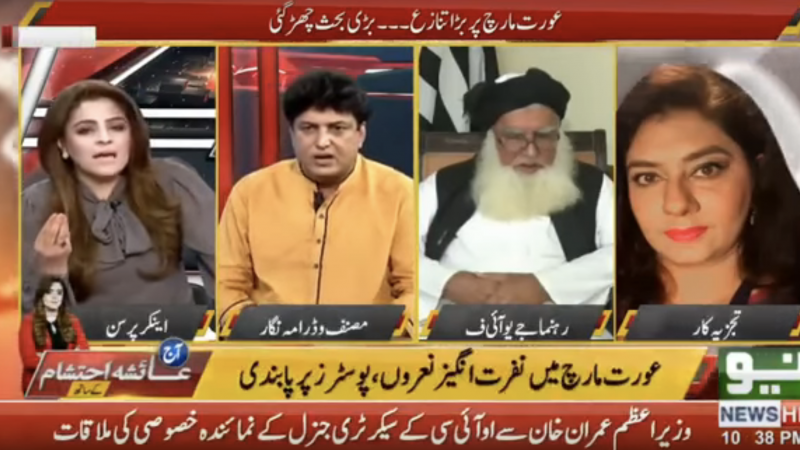 Khalil-ur-Rehman Qamar, a renowned drama director was recently invited to various news channels due to his hit TV drama serial Meray Paas Tum Ho. During the programs, he claimed to be the biggest feminist around. Although in one program, he was tutored by activist Tahira Abdullah on women's rights and feminism.

His statements regarding the Aurat March triggered the controversial debate with Marvi Sirmed which featured the use of abusive and foul language. The video of the debate went viral on social media and it was highly condemned in many platforms. The Pakistan Electronic Media Regulation Authority (PEMRA) was asked to ban Qamar from appearing on TV. Even the Human Rights Commission of Pakistan demanded an apology. PEMRA issued a show-cause notice to the channel and an apology note was also tweeted by the head of the channel.

@marvisirmed Please accept my sincere apology on the incident which happened today on our screen. Being Head of NEO NEWS I am extremely sorry for that and strict action will be taken. We condemn the behaviour of Khalil Qamar.
Nasrullah Malik
Executive Director
NEO NEWS

Senator Sherry Rehman of the Pakistan People’s Party condemned the incident in the senate and refused to attend any program on NEO TV until an apology was given by the director.

I will not accept any show on @NeoTv_Network until this anchor apologises and this abusive man boycotted. If others ( men and women ) do the same when asked for shows this kind of disrespect to women may not get impunity. Women’s rights are human rights. Enough of this nonsense https://t.co/YAJlmawCXF

On 5 March, Geo TV also terminated its contract with Qamar which was widely appreciated by social media users:

The interesting part in all this is that this is not the first time that such spats have taken place on TV programs between men and women, and some even consider it the norm. Any woman who works on women's rights, minority rights or social issues and gets invited by TV channels has to be prepared to deal with derogatory remarks and bad behaviour, and most of the time the anchors are not able to handle the situation.

Despite the long history of women's participation in the political sphere, some conservative sectors in Pakistan continue to promote patriarchial values and this often gets reflected in TV programs.

Even the late Prime Minister Benazir Bhutto was a target of hate speech and foul language while contesting elections during the 1990s when an organized campaign to malign her credentials was presented against her by her rival, former Prime Minister Nawaz Sharif:

Farzana Bari, a human rights activist was also bullied through questions raised on her faith by other panelists when she was talking on the importance of Women Protection Bill.

In another TV program in 2016, Maulana Hafiz Hamdullah Saboor of Jamiat Ulema-e-Islam (F) walked off the show in anger as he tried to bully the anchor Fareeha Idrees which did not go down well with her and she succeeded in countering the attack.

Fauzia Viqar, another women's rights activist and Farzana Bari were part of a discussion on early child marriages in 2016 when the male guest speakers accused them of going against the teachings of Islam.

Even though various episodes of men attacking fellow men are common too, but women have been an easy target for men in Pakistan. The minute a woman speaks up she has to face resistance in online and offline spaces. However, despite similar incidents on TV programs, the recent infamous debate involving Qamar has left a bad taste in the mouth and has been seen as a justification for solidarity actions like the Aurat March.