"Four gone. How many left? The country will deliver justice." 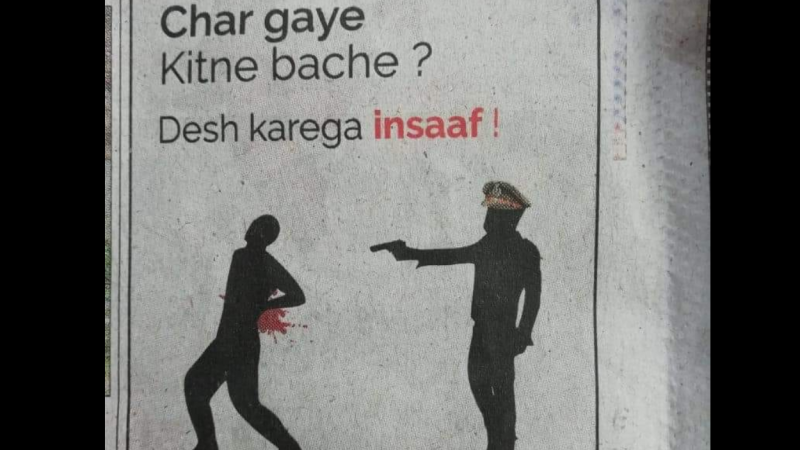 Advertisement in Newspaper celebrating the killings. Translation: Four gone. How many left? The country will deliver justice. Widely distributed image from the Facebook page “Indians of Late Capitalism”

The extrajudicial killing of four accused rapists in India has led to a heated debate between those who applaud bypassing the slow-moving wheels of justice and others who feel that it sets a bad precedent.

On 27 November 2019, Dr. Priyanka Reddy was brutally gang-raped and killed in Hyderabad. Around the same time, another rape survivor was set ablaze while on her way to a court hearing, eventually succumbing to cardiac arrest.

With a rise in rape cases across the country, the outpouring of rage was strong and many have demanded a quick response, including stricter laws and actions against rapists. In a speech to the upper house of Parliament, Member of Parliament Jaya Bachchan even said that rapists should be lynched.

A few days after Dr. Priyanka Reddy was found, the Hyderabad police took the four accused men to the site of the crime to recreate the scene. According to the police, the four men tried to flee the crime scene and were shot and killed. Following this news, netizens expressed their opinions on social media, underlining a large divide in public opinions.

An encounter killing is a term used in South Asia (especially India and Pakistan) to describe extrajudicial killings by the police or the armed forces. According to reports, Hyderabad has a long history of encounter killings and people have repeatedly criticized the police for acting as judge, jury, and executioner. The Indian Consitution provides for the protection of citizens from actions taking place outside of the law.

In the case of the four accused rapists, T K Arun writes in the Economic Times that the fundamental rights of the accused were blatantly violated by the state in Hyderabad.

Other netizens took to social media to request that appropriate judicial action be taken in each case.

Shocking. What have we become? What proof was there that these were real culprits? Do we have information on investigation and evidence which prove crime beyond doubt? They perhaps didn't even have a lawyer, didn't get a hearing. Killed in #Encounter and we are celebrating?

Modi’s done a brilliant job at planting the vision of India as a Great Power where use of violence is an evidence of its strength.

But reminder: Bypassing your own justice system and using state violence against your own citizens proves nothing but weakness. #hyderabadpolice

However, an overwhelming outpouring of support for the police has called the extrajudicial killing of the four men a ‘just’ act of retribution.

Finally yes , Let this day be the beginning of new era where children and women feel safe and secure to live in India.
Quick Justice like this will inculcate fear into the Dirty minds ,
Our sincere prayers have been answered #hyderabadpolice
Hats off #Encounter pic.twitter.com/0QbqJGDHBT

I applaud the #hyderabadpolice who in no time took strong steps & gave befitting punishment to the perpetrators of crime. We shouldn't demoralize police. Cases of fake encounter demoralized Gujarat Police in past. Dr Priyanka Reddy. #justicedelivered #HyderabadEncounter pic.twitter.com/e2m8UvG5Uu

#WATCH Hyderabad: Reaction of girl students when news of encounter of the accused in murder and rape of woman veterinarian broke out pic.twitter.com/z238VVDsiC

I think every father, every parent, every brother in the country today stands behind the #hyderabadpolice. My best wishes to them.

A father in Kerala had to kill the rapist and murderer of his 13 year old daughter, coz a Kerala court let the rapist out on bail. The ‘juvenile’ in the #Nirbhaya case is a free man with a sewing machine. In such a situation, how can one NOT be happy with the #encounter?

According to Times Now News, the victim's father said:

It has been 10 days to the day my daughter died. I express my gratitude towards the police and government for this. My daughter’s soul must be at peace now.

For now, the debate between quick responses and a slow judicial system is at a stalemate.