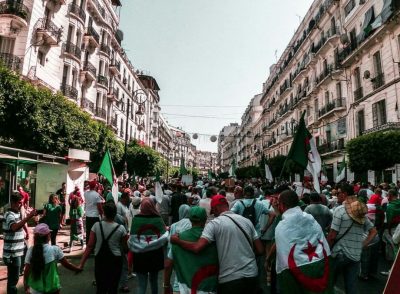 Peaceful march in Algeria for a root-and-branch change of the political system. Photograph by Zaki NJ, used with permission.

Protesters in Algeria believe that presidential elections proposed for December will not guarantee transparency. They fear that allies of former president Abdelaziz Bouteflika may influence the electoral process.

Weekly protests, known as hirak or “movement” in Arabic, began in February this year in opposition to the re-election of Bouteflika, and have continued even after his April resignation.

On 15 September, Algeria's interim president, Abdelkader Bensalah, announced presidential elections to for mid-December, after they had been twice delayed because of the protests.

In his announcement, Bensalah said that the elections would be a chance for Algerians “to write Algeria's history and to contribute collectively to the right choice of president, who will watch over our country's destinies and make good our people's hopes.”

Judges, lawyers, trade unionists and civil activists plan to join government representatives and diplomats to form a 50-member electoral council that will organize, run and oversee the elections.

However the chosen date of 12 December has split Algerians.

Those in favour of the election say it is the only democratic way to solve the crisis, prevent the formation of political vacuum and halt a slide into political uncertainty. They are using a hashtag meaning, “Algeria will go to the polls,” to back the decision to hold elections:

We are going to the polls because elections are the perfect solution to choose an honest president, because it is the safest way to get out of this situation and we are ready to build a new, collective, prosperous Algeria.

But opponents see the elections as a new ruse to muzzle and weaken hirak protests. They took to the streets for the 31st week in a row to protest the elections that, in their eyes, have little credibility.

The #hirak goes unreported on most TV channels. Do you seriously think that elections can be transparent.
Citizens are free to make their choices but let’s stop the propaganda from the system that is staking its survival on it. The system has already decided on our future president.

Several protesters and activists have been arrested without charge, including journalist Fodil Boumala, activist Samir Benlarbi, arrested on the 16 September, while riding in a car with his friend and Karim Tabbou, leader of the Democratic and Social Alliance, arrested at his home. Authorities also arrested 87-year-old Lakhdar Bouregaa, one of the few surviving figureheads of the Algerian revolution, after he said the government “has named the new president, and is now figuring out how to legitimate him.” Furthermore, dozens of students were arrested at the 30th protest on 17 September. CNLD, a national organization for the liberation of prisoners of conscience, published a list of 75 such detainees, of which five have been released.

Not even ill activists were spared.  Ziane Bilal, who has cancer, requested release from prison for a chemotherapy appointment. “I know that I am going to die and I do not want to die in prison. I want to spend the days I have left outside prison walls,” he said through tears.

On 20 and 27 September, both Fridays, police blocked the main entry points to Algiers, after authorities banned protesters coming into the city in an attempt to quell the movement. LADDH, the Algerian human rights defense league, condemned this move as a serious affront to free movement:

The main arteries into Algeria are blocked, just like last Friday.
Trains into the capital are cancelled.
Police vans are parked at Tafourah [interchange station] and officers are searching people looking for protesters.
Hello, its Friday 32 of Hirak 2019!

The authorities have also forbidden meetings of political parties and associations and closed the offices of mainstream TV channel Al-Araby, after it broadcast images of protest slogans against the country's strongman, Ahmed Gaïd Salah, chief of staff of the Algerian army. TSA, the popular Francophone news site that has covered the protests from the start, has also been shut down since 12 June.

Khaled Drareni, the founder of online newspaper Casbah Tribune and correspondent of television channel TV5 Monde, speaks to the pressure bearing down on journalists in Algeria:

How long can we keep silent?
Journalists and correspondents are constantly threatened by representatives of the communications ministry because they cover protests objectively and do not censor hostile slogans directed at those in power.

In a statement issued on 9 September, Human Rights Watch criticized the restrictions on civil liberties and listed more than forty protesters who have been arrested since June. Ahmed Benchemsi, a manager at HRW, was arrested and expelled.

Everyday, I receive many messages from families of those in custody with photos of their children, who have been arrested for their political opinions. What I believe is that freedom of expression is everyone's right. You might not agree with someone but you should not lock them up; that person is not a criminal. No one should be arrested for speaking out or expressing their opinions. I am launching the hashtags #freedomfortheprisonersofconscience, and #freedom ofexpressionismyright, in solidarity with all prisoners of conscience. I hope that everyone will join this campaign to defend our right to freedom of expression.

By blocking the capital and undertaking searches and arbitrary arrests, the government has tried to stop peaceful marches but has failed. The protesters have shown that, once again, nothing will stop them until they reach their stated goal of ending the political system that has wielded power since independence in 1962.