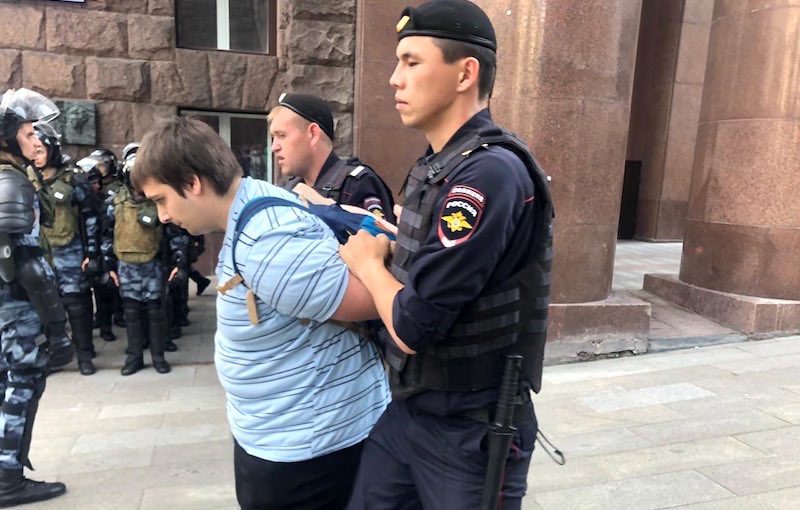 After uniformed police beat protesters and detained passersby in an unauthorised demonstration in the centre of the Russian capital, many Muscovites are very angry. Some of them have found a novel if controversial way to settle scores: by identifying the men behind the helmets, truncheons, and riot shields, and sharing their names, dates of birth, and links to their social media profiles online.

Police say that 1,500 attended the mass protest held in central Moscow on 3 August, though independent observers have given much higher estimates. According to OVD-Info, a project which monitors freedom of assembly in Russia, 1,001 people were detained. It followed another protest held on 27 July at which 1,373 people were detained. Both were sparked by the refusal of Moscow’s electoral commission to register independent opposition candidates ahead of local elections on 8 September.

The online flashmob to “deanonymise” policemen has assembled around the hashtag #ониразгонялипротест (“they broke up the protest”), and was launched by the Twitter profile of anti-corruption project Municipal Scanner on 27 July. The website itself does not mention the “deanonymisation” move.

If it is difficult to say whether a specific team is coordinating these posts, that is because there is probably no need for one. “Deanonymisation” is not rocket science; with patience, persistence, and a steady internet connection, anybody can do it.

Ruslan Leviev, head of the Conflict Intelligence Team, an online research agency, tweeted about the methods used to “deanonymise” the policemen. Leviev, who has stressed that he has no ties to Municipal Scanner, suggested that the online tools being used are FindClone, which allows users to upload a face and have it matched with the photos of users of Russian social media network VKontakte, and the reverse image search function of Russian search engine Yandex. The latter then allows the faces to be linked to active VKontakte accounts (an article by the independent investigative journalism website Bellingcat provides a more detailed explanation of these methods.) 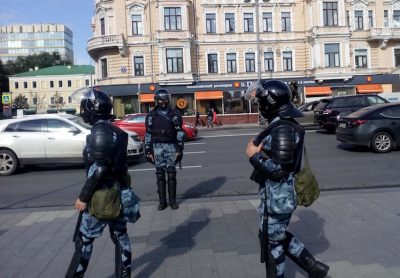 So far, most policemen being identified are those involved in the dispersal of the 27 July protests in Moscow. But a matter of days after the August 4 protests, photos from that event started surfacing online, among them Serhiy Kusyuk, a Ukrainian police officer who commanded the Berkut riot police on 30 November 2013, when the unit attacked protesters on Kyiv’s Maidan. After the revolution of 2014, Kusyuk fled to Russia alongside several other functionaries of the ousted government of president President Viktor Yanukovych. Kusyuk is currently wanted by the Ukrainian authorities.

But “deanonymisation” cuts both ways. On 1 August, the website Ugolovka.info appeared, which identifies participants in the Moscow protests, linking to their VKontakte profiles. In February 2018, a similar website called JeSuisMaidan was launched which included the personal details of hundreds of supporters of Alexey Navalny living in St Petersburg; men with cameras wearing jackets bearing the site’s name were seen at a protest in the city that year. The creators of both websites remain unknown.

Police appear to be shaken by the “deanonymisation” drive. On 30 July, the Telegram channel of Baza, a recently launched independent online publication, reported that the head of Moscow’s city police had ordered all employees to change their social media details and delete any public photos where their faces are visible.

The order by Moscow city police headquarters allegedly came after a certain police captain Syakin said that his mother received a threatening note at home saying “we’ll burn your house.” As lawyer Andrey Knyazev told BFM Radio in a 30 July interview, the main legal hurdle to the “deanonymisation” drive could appear if a member of the public decided to act on the information provided and take revenge on a police officer. If the prosecutors’ accounts are to be believed, on 4 August one man from the Moscow Region was arrested for calling for violence against a police officer’s children; the investigative committee added that similar cases will be considered a criminal offence.

But others say there are good grounds to be suspicious of the authorities’ portrayal of the risks posed by the “deanonymisation” of police officers. Sergey Smirnov, editor of MediaZona, a publication monitoring persecution in Russia, noted on Telegram after the 3 August protests that the police would be watching social media particularly closely in order to find pretexts to make further arrests.

Nevertheless, with tempers high, Municipal Scanner has had to warn its supporters on its VKontakte to not harass family members of the “deanonymised” officers. “The wives, parents, and most of all the children of these criminals are in no case to answer for the criminal’s actions,” read the statement. Other supportive social media users made the same pleas:

Friends! Don’t write insulting messages on social media to the [policemen] who were identified by the photographs. Don’t be like those propagandistic trolls from Olgino. The “guards” will sooner or later (the sooner the better) understand what mistake they have allowed to happen to their fellow citizens.

Some social media users went as far as to call “deanyonymisation” illegal, arguing that policemen had a right to privacy:

Article 137 of Russia’s Criminal Code. On violating the inalienable right to privacy. 1. The illegal collection or distribution of information about a person’s private life, comprising his personal or family secrets, either without his consent or by disseminating this information to the public… and so on!

Municipal Scanner argued in response that its campaign was perfectly legal:

1. It’s legal. Only public information is used and no personal data is being collected.
2. Police officers should understand that they are part of society and that their work is to defend citizens, not to maim them and become like oprichniks [Tsar Ivan the Terrible’s guardsmen known for terrorising civilians]

The same Twitter account added that there would be no need for “deanonymisation” if police wore badges displaying their identification numbers as required by law. The founders of PravNomer, an initiative to demand that police observe the law, note that police frequently cover these badges beneath their bulletproof vets. On 28 July the group launched a petition for identification numbers to be printed on police uniforms and helmets. These facts were widely pointed out by social media users discussing the “deanonymisation” campaign:

How exactly can “deanonymisation” apply in the case of police? A policemen is legally obliged to introduce himself before engaging with ordinary citizens; he has no right whatsoever to anonymity.

What does deanonymisation tell us about the volatile state of Russian politics in mid-2019?

llya Milshtein, a columnist at Grani.RU, an independent news website blocked in Russia, wrote on 2 August that “deanonymisation” was a sign that the advanced technology used by authoritarian regimes to repress and surveil political opponents can be a formidable weapon in the hands of dissidents themselves. “Yes, the balance of power is unequal, but the faces of ‘deanonymised’ [policemen] armed to the teeth betray the same fear as the unarmed who oppose them. The outcome is unpredictable,” concluded the columnist.

Deanonymisation has reopened questions about what, or whom, militarised police forces appear to be hiding from; a question which is not only being asked in Russia. In his recent ode to Russia’s riot police written after the 3 August protest, Russian musician Andrey Makarevich wonders why the country’s riot police have taken to wearing balaclavas:

Maybe the mask is just for show,
You wear it so that others know,
That you defend the order of things,
That you’re no jokers; you serve kings,

That’s probably why; but I surmise,
The real need for your disguise:
Is so no-one will know your name,
When at long last you feel ashamed.

“Deanonymisation” has shown that in times of near-complete digital surveillance, even the strong arm of the state cannot remain faceless, and neither can the masses of ordinary citizens in its way.