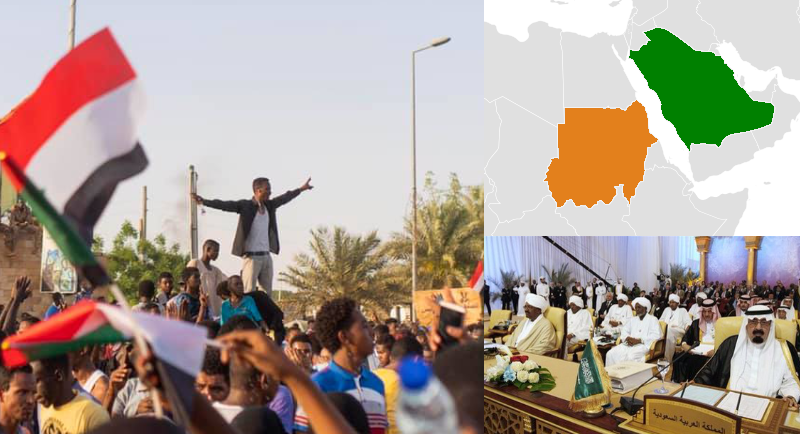 On June 3, 2019, thousands of Sudanese protesters continued pro-democracy protests demanding civilian rule in Sudan, armed with nothing but peaceful disobedience. In contrast, the Rapid Support Forces (RSF), acting on behalf of the Transitional Military Council (TMC) temporarily in charge of Sudan, were ready to shoot and kill on that fateful.

Around the same time that month, the United States Senate voted to block sending $8 million worth of arms to Saudi Arabia—a block US President Donald Trump has said he intends to veto.

Saudi Arabia strongly supports the RSF. RSF leader Mohamed Daglo is a trusted friend and an ally of Saudi Arabia. In May 2019, Daglo met with the Saudi crown prince Mohammed bin Salman and assured him of continued cooperation with Saudi Arabia in their ongoing war in Yemen.

The Saudis supply RSF with money and arms, so when the US supports arms deals with Saudi Arabia they’re essentially supporting RSF as well. Saudi Arabia, a strategic ally of the US in the region, has tried to secure gains at the cost of the Sudanese people’s dream.

The Sudanese revolution broke out in December 2018 under the banner of “Fall, That’s All!”. Sudanese citizens demanded the ouster of President Omar Bashir and his regime, which had held power for over 30 years. In mid-April 2019, Bashir was ousted and the TMC took over as Sudan’s de-facto leaders.

On June 3, 2019, the RSF used brutal force to disperse peaceful protesters holding a sit-in and calling for democratic and civilian-led government in Sudan. Initial reports on this massacre confirmed that at least 100 people were shot to death, their bodies thrown into the Nile river, and women were raped in the streets.

In an attempt to obscure their crimes, the RSF and the TMC shut down the internet across the country.

The RSF is made up of members from  the notorious “Janjaweed,” well known for their role in atrocities committed in Darfur. International rights organizations have issued several reports about their heinous crimes, including “Men With No Mercy,” by Human Rights Watch. HRW also placed RSF leader Daglo on the “partial list of individuals who should be investigated by the ICC.”

In addition to supporting Sudan’s RSF, Saudi Arabia is also involved in an ongoing war in neighboring Yemen. In 2015, they launched a military intervention there to support the government in its attacks against Houthi rebel groups. The Saudi-backed coalition is made up of nine countries from the Middle East and Africa, including Sudan, with RSF as an outspoken ally.

Many human rights groups have condemned and criticized the war in Yemen for ongoing human rights violations, with 14 million people at risk of starvation. Since 2018, 6,872 civilians had been killed and 10,768 wounded, primarily by Saudi-led coalition airstrikes, according to the Office of the United Nations High Commissioner for Human Rights.

It is no secret that Sudan’s RSF is recruiting child soldiers to fight in the Yemen war. Daglo assured the Saudi Arabia that Sudanese forces would remain in Yemen to defend the security of Saudi Arabia.

American arms are now in the hands of Saudi crown prince Mohamed bin Salman, who not only orders the killing and torture of journalists such as Jamal Khashoggi, and also fully supports a Daglo and his militia who kill protesters, rape women and recruits children as soldiers.

As a Sudanese citizen, I find it really embarrassing that a great nation like the US—that has been built on the principles of freedom and justice for all—keeps sending arms to Saudi Arabia.

I, for one, stand with all the ongoing efforts in the US at all levels to put a halt to the selling of American weapons to Saudi Arabia. This is both a moral and practical stance American people should take in order to maintain their long-term interests with regard to Sudanese citizens.

I have two wishes: That no new massacre will occur in Sudan; and that the US will stop sending arms to Saudis who protect and support a war criminal who will likely prevent my first wish from coming true.

Mohamed Suliman is a Sudanese citizen living in the U.S. He was one of the coordinators of a campaign that changed the US tech sanctions policy on Sudan, and now tracks Chinese companies that export tear gas to the Sudanese regime. He also coordinating a project to remove the RSF content from the Internet.