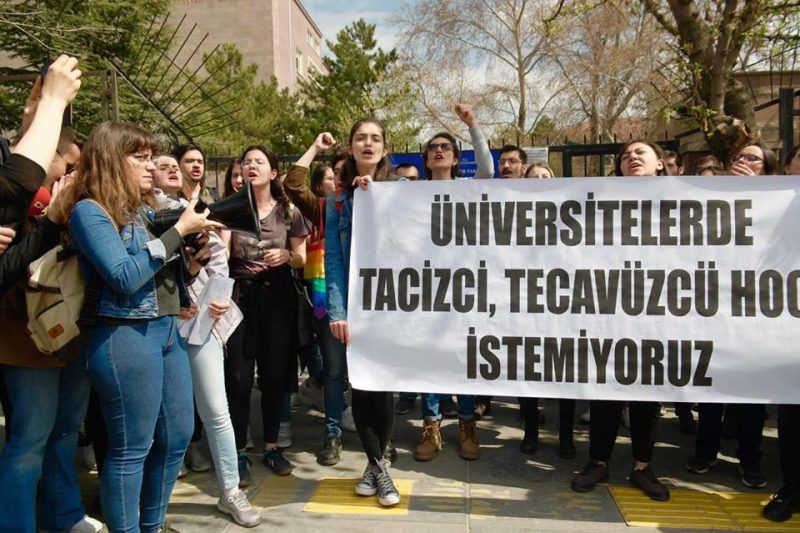 Protests at Ankara University on April 8. Photo by the University Collective of Women. Permission to use.

Earlier this month a 23-year-old woman alleged that she was beaten and raped by a 54-year-old professor working at Ankara University whilst she was serving as the vet on duty at the private veterinary clinic the professor co-owned.

In her testimony, the young woman, whose name has been redacted by local media as C.B. claimed that Professor Hasan Bilgili offered her dinner and asked her to drink with him.

She then explained what happened when she refused the offer:

He forced himself on me and kissed me. He hit my head three or four times on the floor. I passed out. When I opened my eyes, it was 1.30 AM.

The first person the young woman saw when she woke up was Bilgili's business partner, a veterinary surgeon called Serkan Durmaz.

Something happened between you and him. Do not complain. These things will get you into trouble.

The gynaecologist she was taken to see by Bilgili and Durmaz, Huseyin Senyurt, had a similar message:

Even if you complain, nothing will happen. Just take this medicine.

Hasan Bilgili was arrested after C.B filed charges against him.

Standing in the dock at a pre-trial hearing he called the claims a conspiracy against him, and cited his status as a married man in his defence.

The news about the sexual assault at a private clinic outside the university was submitted and an investigation targeting the alleged assailant was launched. The aforementioned person has been suspended.

Hasan Bilgili had been accused of mistreating women before.

According to a Hürriyet newspaper report, both Hasan Bilgili and his brother Ali Bilgili, a pharmacology professor at the same university, were accused of harassing women students in 2007 and faced court as a result.

The judge ordered Ali Bilgili to be suspended from university work as a result of the accusations, while Hasan Bilgili had his pay docked. Both eventually returned to their positions.

Hurriyet newspaper article covering accusations against the Bilgili brothers in 2007.

More recently, in 2016, Hasan Bilgili was the subject of further sexual assault allegations, this time made by an exchange student who was studying at his veterinary department.

Students’ protest: We will not stay silent

During the protest, students chanted “we do not want a rapist teacher.”

The protests found an echo on social media.

The topic of sexual violence has been especially highly charged in Turkey ever since the Council of Higher Education (YÖK) controversially withdrew in February from its commitment to the ‘Gender Equality Attitude Certificate’, a document which bound it to incorporate gender equality principles across its work.

The higher education regulator's president cited aspects of the document “inappropriate for our values” as a reason for its withdrawal.

The University Collective of Women, a group founded in 2007 by women university students, told Global Voices that Turkish university campuses are increasingly becoming places of fear for many women.

“Students in faculty warn each other not to enter the rooms of teachers alone,” a spokeswoman for the collective told GV by telephone.

#RapistProffesor The two brothers are professors at the same university. There is more than one case against them. They have been living with students for years without being punished and they continue to commit crimes.
Enough is enough. Punish these criminals.

Ankara University's Support Unit Against Sexual Harassment, founded in 2011 after a spike in sexual abuse cases at universities, has pledged to continue investigating complaints and attempting to bring cases to court.

But unit coordinator Gülriz Uygur, a law professor at the university, says victims of abuse are often press-ganged into silence.

“Students cannot complain to us about sexual abuse they have faced, because they are threatened with notes and they are afraid,” Uygur told Hurriyet newspaper.

Accusations of sexual predation at Turkish higher education institutions this year have not been limited to the capital.

One university in the country's largest city Istanbul, the private Koç University, was hit by a giant scandal in March after a male student accused of sexually abusing a female counterpart faced no other punishment than a three-month suspension.

Koç University is concealing the violence and abuse. We are #notsafeatcampus

The same month students at the Dokuz Eylul University in the country's third largest city, Izmir, protested against the head of the sociology department Professor İbrahim Kaya, who they claimed had been systematically abusing women students since 2014.

Women students taped slogans including “We do not want an abuser-teacher” onto the walls of the institution. Now they are preparing to file criminal charges against Kaya.