Can Jordan offer some lessons to oil-dependent ‘giants’ on renewable energy? 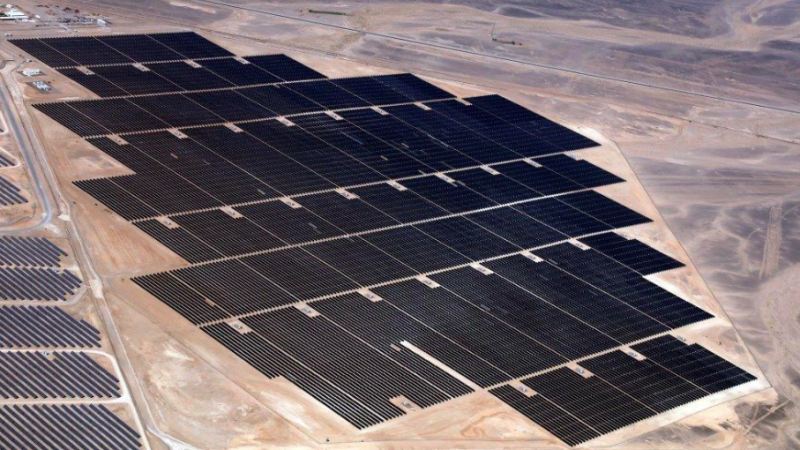 The demand for electricity in the Middle East is expected to triple by 2050, accelerating the diversification of economies away from fossil fuels and toward renewable energy.

A report that looked into the global energy landscape up to 2050 by the Norwegian global quality assurance and risk management company DNV GL predicts a dramatic shift in the Middle East’s economies, policies, and, consequently, technology investments to meet the increasing demands.

Mohammed Alghoul, a Ph.D. student in solar energy at King Fahd University of Petroleum and Minerals in Saudi Arabia told Global Voices said that over half of the region's total energy output could come from renewable energy by 2050:

Energy demands in the UAE [United Arab Emirates] are expected to grow rapidly in the Middle East because of the rapid growth the region’s population. The increase in demand and the decrease in the cost of renewables will mean that more than half of the region’s total energy output will come from variable renewables by 2050.

DNV GL’s Energy Transition Outlook 2018 states that the transition of investment to renewables in the region makes complete sense — triggered by the falling costs of solar and wind technologies as well as the abundance of sun and wind in the region. Alghoul adds:

“There will be more demand for electricity for cooling buildings and for water desalination, particularly in the desert, and wind and solar have the potential to provide cheaper power. … And, unlike fossil fuels, these resources will not run out.

And oil-and-gas-rich countries, such as Saudi Arabia and the UAE have already started investing in renewable energy — especially solar.

Saudi Arabia, which has the second largest petroleum reserves in the world, is investing in 9.5 gigawatts of solar and wind by 2023, according to DNV GL. Saudi Arabia’s Vision 2030 development plan includes a new commitment to renewable energy including 30 percent of its electricity coming from renewables by 2030. Yet, the kingdom's vision has been heavily scrutinized and called into question in light of the murder of Saudi journalist Jamal Khashoggi in October 2018.

The UAE, which sits on eight percent of the world’s oil reserves, is also investing heavily in its renewable energy capacities and aims to have 50 percent of its energy from renewables by 2050.

Both oil giants are also encouraging others in the region to develop their renewable energy infrastructure to strengthen energy security and create jobs — a memorandum was signed in 2017 to develop a grid that interlinks the power supply in the Arab world.

In fact, according to findings by Greentech Media (GTM), due to the launch of a number of new solar projects in the region, oil prices have dropped to a record low.

Findings from a report by Global Solar Market Attractiveness Index also predict that Saudi Arabia, UAE, Bahrain, Oman and Jordan will collectively install more than 22.4 gigawatts capacity in the next four years.

But despite falling costs, most of the region still awaits solar markets to mature on a commercial level says Abdullah Umer, project manager at King Abdullah City for Atomic and Renewable Energy.

A major factor for this could be the distorted energy markets throughout most of the region. Umer states:

Most countries in the region have used their surplus oil production to balance out subsidizing fuel and electricity prices domestically to varying extents for many years with what they claimed were reasons to foster investments and businesses.

GTM Research calculates that the average cost of solar PV could be competitive with grid electricity if it wasn't artificially lowered.

And the regional oil-rich nations can look to Jordan when it comes to policies on fostering a solar industry, which, according to GTM, stands out as one of the only countries to have an attractive market for commercial-scale solar.

Jordan passed the Renewable Energy and Energy Efficiency Law in 2012 and has actively been looking toward renewable energy since. Renewable energy projects could make Jordan, a country which is otherwise completely reliant on oil imports for fuel, more energy independent.

The Shams Ma’an plant, built by a U.S.-based solar energy company, First Solar, opened in 2016 and powers 35,000 homes near Petra and the royal palace is also completely powered by a solar plant.

Jordan, unlike most of its neighbors, is supporting its growing solar industry. It has removed fuel subsidies and is providing institutional support to the renewable energy industries through energy transition laws.

Jordan’s national Renewable Energy and Energy Efficiency Fund also offers debt and equity-based incentives to small to medium scale projects in partnership with six commercial banks. The country has already seen over US $2.5 billion in investment since 2012.

If countries remove their subsidies, solar will be allowed to compete in a free market and it will very likely see prices fall.