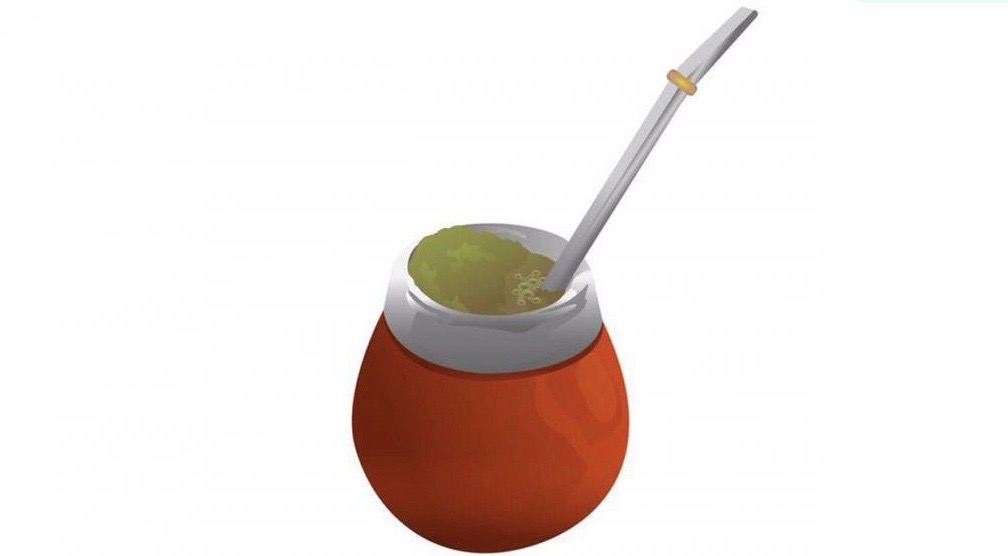 The mate emoji as proposed by a group of Argentinians to Unicode. Image used in the document with the proposal and reproduced here with permission.

If you visit Uruguay, it's likely that one of the first things you will notice will be people carrying around this odd wooden cup as they go about their days. In Argentina, you might be offered a drink from that cup when visiting someone. The same is true for homes in the south of Brazil. The beverage at issue is mate, a hot water infusion of leaves of yerba mate.

Drinking mate is a tradition of the indigenous Guarani and Kaingang people dating from thousands of years before the Christian era. Today, the custom is widespread in the south of South America, including Chile and Paraguay, as well as across the Atlantic in countries like Germany, Lebanon and Syria (which is Argentina's biggest importer of yerba mate in the world). It's pronounced [ˈmate] in Spanish and [ˈmatʃi] in Portuguese and is served in a special cup, usually made of wood, and drunk through a silvery straw.

Shockingly, there isn't an emoji representing this beverage beloved by millions, but some people are trying to do something about it. In September 2017, five Argentinians who had gathered at Media Party, an annual hacker event in Buenos Aires, decided to roll up their sleeves for the world's first mate emoji.

“We did a first version of the design and the research for the proposal. Then, we kept working from there”, says Santiago Nasra, a video-journalist, member of the group fighting to make the mate emoji happen, in a conversation with Global Voices by email.

While the team initially considered other Argentinian delicacies, such as “choripán” (bread and sausage) or “asado,” a traditional barbecue, they finally agreed that a mate emoji would be more representative of cultures beyond just Argentina.

“Since mate is not a specific product, but a universal concept that has been appropriated and adapted by different cultures, it deserves to have an emoji,”, Santiago says.

In May, the Unicode Consortium, which handles emoji standards, shortlisted the mate emoji for 2019's batch. This crucial step was only possible thanks to Santiago and the Argentinian group, who presented a 40-page-long case to the non-profit.

Among other things, the document details the health benefits associated with the regular consumption of yerba mate and the number of countries that import it (113 in 2016). It includes photos of celebrities delighting in the drink — such as Pope Francis, Pope John Paul II, former USA president Barack Obama, international football stars Leonel Messi, Luis Suárez, and Antoni Griezman — and scenes from movies like Captain Fantastic and Amazon Prime's series Mozart in the Jungle whose characters consume it.

As the document's brief states:

The mate emoji would not be overly specific, and in fact veers toward general, as it can be used to represent not only Latin American mate sets, but also Arab and Asian yerba mate drinkers. The design would imply “mate” as indicative of mixing the herb and water (hot or cold) and the sipping device. It is at the very least no more specific than ethnic food or beverage (aka sake) already represented in the emoji lexicon, including Mexican, Italian and Japanese foods. We have shown the proposed design to Brazilians, Paraguayans, Germans, Syrians and Uruguayans. They all understood the essence of mate in our proposal and said they would definitely use it beside the slight differences between regional cups.

In October, Unicode presented its version of the image, posted here on a tweet by Florencia Coelho, who's also part of the team who drafted the case document:

#emojidelmate in Windows 10 emoji preview for 2019

The online campaign for the mate emoji goes under the hashtag #emojidelmate.

According to its supporters, the mate emoji would be the first character from South America to make it to the world's keyboards, but it is certainly not the region's first attempt. Since 2017, two Brazilian professors have been lobbying Unicode to include the capybara, a mammal native to South America, in the emoji fauna.

With the increase of emoji's popularity over the past years, people are ever more eager to see themselves represented in them. Examples of emojis added to the glossary recently include families with same-sex parents and figurines with different skin colors. To the supporters of the mate emoji, their plea is also a case for diversity:

Mate goes beyond any drink, as it is full of cultural meaning (besides its numerous health benefits). (…) Mate is too significant, too important not to be represented by an emoji. It is time it gets it chance for the joy of its Latin American and worldwide fans.

Unicode will release a second shortlist in February 2019 and the finalists in June 2019. Without a doubt, both announcements will be followed intently by mate emoji fans.

UPDATE: In February 5, Unicode announced the mate emoji among the 230 new emojis of 2019, alongside guide dogs,  flamingos, the sari and an hindu temple.