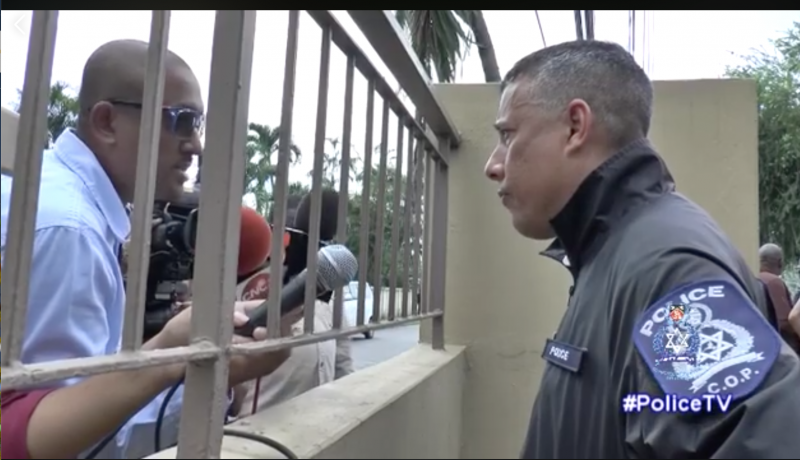 Screengrab from a video by the Trinidad and Tobago Police Service, showing the country's Commissioner of Police, Gary Griffith, talking with reporters outside the gated community in northwest Trinidad, where a special unit of police officers made a drug and weapons haul alleged to be worth millions of dollars.

On Tuesday, December 4, 2018, the Special Operations Response Team (SORT), a new arm of the Trinidad and Tobago Police Service, made a multimillion-dollar drug bust in a gated community in Westmoorings, an upscale residential area in Trinidad's capital, Port of Spain.

Led by the no-nonsense new Police Commissioner Gary Griffith, officers recovered illegal firearms and several rounds of ammunition and arrested five people in connection with the haul. Griffith's appointment in August of this year was welcomed by citizens who have grown weary of escalating violent crime.

Krystiana Sankar, the former step-daughter of Stuart Young, a member of parliament who holds two major portfolios as the country's minister of national security and minister of communications, was one of the five arrested in the raid.

When local media began referring to Sankar as the minister's “relative”, Young was quick to put out a statement:

I have no connection or relation to the young woman in question.

I will emphasise that no one is above the law and anyone who breaks the law will face the consequences.

Talking to reporters on the scene of the drug bust, Griffith said, “Regardless of who the individual is […] if it is you break the law, I will deal with it.” He added that he intends to cripple the illegal drug trade in Trinidad and Tobago, and had a message for all those involved — “Happy hour is over.” The phrase soon blew up on social media.

The twin-island nation, located at the southernmost end of the Caribbean archipelago, has been plagued for many years now by its reputation for playing a role in illegal narcotics trade.

Griffith has touted himself as a man of action, and he certainly has the talk to go along with it. He challenged those issuing death threats, for example, to “come for him”, as their idle bluffs were “getting boring”. His swagger has boosted his popularity and earned him a bit of a cult following, even inspiring a dancehall-style song titled “The Commissioner”.

Prior to being named top cop, the country's police service operated for years with an acting police commissioner. Under Griffith's leadership, the police have successfully solved several serious crimes, including three kidnappings.

But there has been controversy too.

In one of the kidnappings, the police released photos of suspects before they were charged. The officers’ rough handling of student protestors also caused Griffith's style to be criticised as “aggressive”.

In an incident in October, after five young men were killed in an alleged shootout with police, citizens raised questions as to whether or not the officers acted extrajudicially. Even as the Police Service Commission asked witnesses to come forward to aid the investigation into the incident, Griffith said that the evidence supported his officers’ version of events — they were fired upon.

Although Griffith made it clear he would not condone any flouting of the law by members of the police service, his approach caused journalist Sunity Maharaj to suggest:

As much as we may wish it to be otherwise, Gary Griffith is not the answer to our prayers but the symptom of our failure. In our greatest moment of fear, we have manifested and brought him to life as protection against the very forces we have created. Like Phoenix, he has risen out of the debris of our collapsed institutions, as powerful and as large as the fear stalking the land. […] Cornered by criminals, we have at last found national unity in a leader promising to deliver us out of the valley of death into which we had happily walked with our eyes wide open, looking for profit.

Indeed, some social media users — from Facebook to WhatsApp — are concerned that the crime-fighting effort has become too focused on Griffith as saviour, rather than on strengthening the police service as a whole.

People also want to know when Griffith will begin going after the “big fish”, though one criminologist, Daurius Figueira, was of the opinion that this particular bust was nothing more than “a single, independent operator being brought down.”

In a post at Wired868, Keston K. Perry explained:

What happens by our lack of active participation in our democracy is that it creates space for populist figures like Griffith to emerge and quickly garner unwarranted legitimacy — remember, he has been police commissioner for a short four months.

No one, no matter how energetic and outspoken they may be, can make substantial and meaningful change in one of the most dysfunctional institutions in our country in such a short time. Systemic change requires a much more thoughtful and strategic approach.

Until then, though, Trinbagonians seem content to do what they do best: find humour in a difficult situation. The memes came fast and furious and targeted both Commissioner Griffith and Minister Young.

But the ripple effects of Griffith's modus operandi in general — and this drug bust in particular — may very well turn out to be no laughing matter.