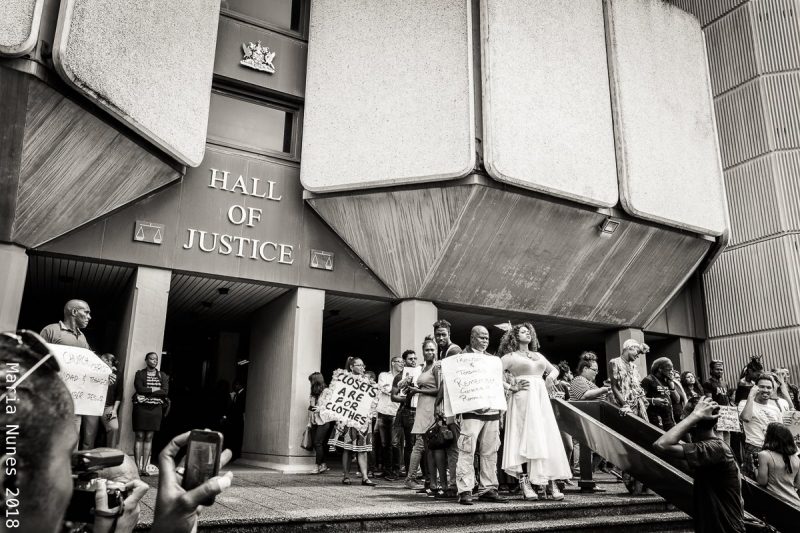 On one side of courtroom POS 09 sat a small group of pastors dressed in suits and expressions that were just as stiff. On the other were supporters of sexual and gender minorities’ rights, at least one of them sporting a T-shirt that declared details of the “homosexual agenda” in Trinidad and Tobago: “1. Buy Crix [a popular local cracker] 2. Spend time with family 3. Fight for equality”.

In his eloquent summary of the judgement, Justice Rampersad explained:

At this point, the Court feels compelled to state in conclusion that it is unfortunate when society in any way values a person or gives a person their identity based on their race, colour, gender, age or sexual orientation.

That is not their identity.

That is not their soul.

Comparing the law with those that allowed apartheid and the Holocaust to exist, he added:

Soon after the ruling, the government announced that it would appeal. As expected, the public response to his ruling has divided society right down the middle, mirroring the physical divisions that existed in court.

In a Facebook status update, Rhoda Bharath challenged the contradiction: 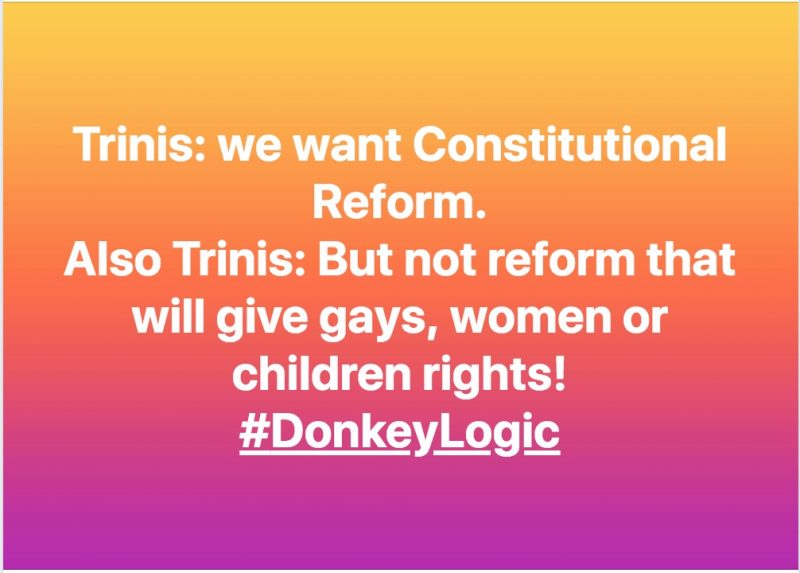 A Facebook status update by Rhoda Bharath which reads: “Trinis: we want Constitutional Reform.
Also Trinis: But not reform that will give gays, women or children rights! #DonkeyLogic”

It's particularly sad when an activist cannot understand that ALL oppression has to end for the one in which you are particularly interested to stop. When a white gay male doesn't address racism. When a black straight male promotes homophobia. When an adult female slaps children or exerts authority over them.
You don't have to be the champion of other causes but you can't be so unaware that you don't see the importance of intersectionality.

Still, many were sticking to their sections. In a guest post at Wired868, Afryea Charles suggested that the ruling put Trinidad and Tobago “in great danger of losing our religious liberty”:

For me, these are clear indications that Jesus is coming back soon. Any student of bible history and prophecy—I count myself among them—knows that, once we begin to pass legislation to ensure LGBTQIA [lesbian, gay, bisexual, transgender, queer/questioning, intersex, and allies] rights, we are taking one more step towards D-Day and the eventual destruction of the earth. […]

I understand the concern and angst about this recent decision. It is not lost on me how the removal of this law might have a serious impact on our way of life. I understand what it can mean for our educational institutions, hospitals, businesses and general lifestyle.

Apparently speaking for the religious-minded, her opinion piece went on to make the point that “the LGBTQIA community is the least of our worries”. Worryingly, Charles named paedophilia, sexual abuse, elderly abuse and stealing — all of which lack consent — as equal to what the law will now legitimise:

We need to acknowledge the existence of the sinfulness being practised within our congregations and clean that up first. Adultery, elderly abuse, fornication, homosexuality, lying, paedophilia, sexual abuse, stealing, underhand business deals and all manner of crimes are rampant within and are being practised with impunity.

So, Trinidad and Tobago, get ready! To bugger in public or to bugger in private, that is the question that was answered today.

This critical idea of consent seemed to be a difficult one for many people to grasp. Take, for example, one Facebook thread, which shared a screen grab of a comment by a civil society member who attempted to argue that there is a slippery slope between “chang[ing] the laws to suit behavioural preferences” and the eventual breakdown of law and order. Rhoda Bharath asked:

Dear homophobic people of Trinidad & Tobago and The World,
I am exhausted.
I am hurt. I am saddened. I am anxious. And I am human.
I deserve rights. I shouldn't have to explain that to you. I shouldn't have to watch my friends suffer and die. I shouldn't have to fight for my right to just exist.
I am queer and I am not “less than” you. I am not “abnormal” nor “unnatural”. I am not a threat to you.
I am a human person deserving of the same rights as any straight person. I may love someone of the same sex, but that is of no importance to you, or to the politics of this country.
We are all humans. We are all the same.
When are you going to realize you’re on the wrong side of history? You’re on the side of those who fought against interracial marriage. You’re on the side of those who were pro-slavery. You’re on the side of those who fight against women’s rights.
Let me explain.
LGBT rights are human rights. […]
Remember, homosexuality isn’t a choice, but homophobia is.

In response to the argument that decriminalizing the LGBT community will result in damage to the existing status quo, many Facebook users began sharing a buggery law “fact sheet”, which irreverently laid out exactly what changes will and will not take place as a result of the court judgement: 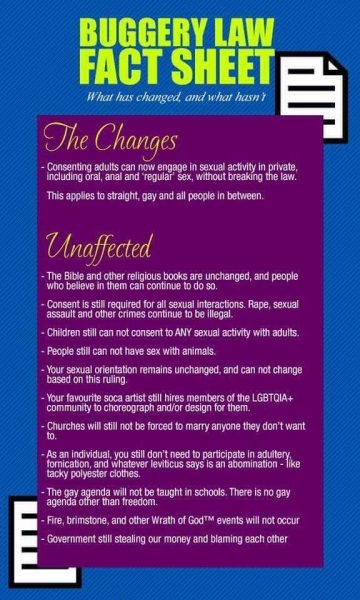 There has been other immediate fallout, however, with Trinidad and Tobago Newsday reporting that three young men who took part in the rally outside the Hall of Justice following the landmark court ruling, have been kicked out of their homes as a result. Several Facebook users were saddened by this turn of events and offered them temporary accommodation.

Attention is also turning to bigger concerns. As Jason Jones told reporters on the steps of Trinidad's Hall of Justice following the decision, “The human rights issue is not just local. This is a global issue. Over 75 million Commonwealth citizens are criminalised using similar laws — 37 Commonwealth nations — criminalised similarly to Trinidad, but it was just struck down by one; it's now 36!”

With the Commonwealth Heads of Government Meeting taking place in London from April 16, 2018, many social media users are agitating for the issue to be dealt with at that level. Jones wrote an opinion piece for the UK Guardian in which he noted, “It is imperative that LGBTQ+ is on the agenda in London. The event offers both a safe space for this discussion and an opportunity for the capital of the former empire that bequeathed us these heinous laws to help rid us of them.”

For now, though, the battle is taking place locally and Jones is optimistic that Trinidad and Tobago's Equal Opportunity Commission (EOC) will be instrumental in putting anti-discriminatory laws in place in order to protect vulnerable communities, saying, “The next step will be to move for inclusion in the Equal Opportunity Act.” He thanked the EOC for its support in his case and said now the focus should be on drafting proper policy in order to move forward.

In the words of Facebook user Dion Boucaud, who was at the Hall of Justice when the judgement was announced:

Today I saw love …. I felt the hate. I saw victory …. and defeat. I saw tolerance and ignorance. I saw activism … I saw democracy.
Today I saw peaceful protest.
Today I saw hope.
A lot to unpack. A lot to discuss. Let the dialogue continue. Peace and love.