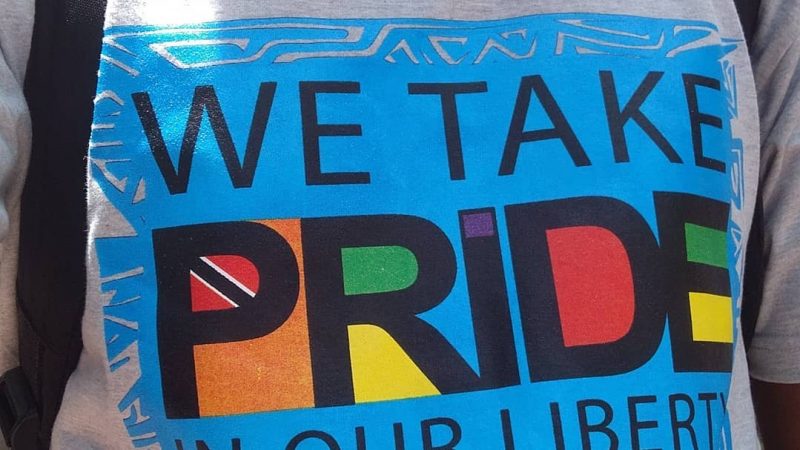 A t-shirt with a “Pride” graphic spotted at the gay rights march in Port of Spain, Trinidad, on April 9, 2018. Photo by Brendon O'Brien, used with permission.

In January 2018, a text message advising that Trinidad and Tobago's buggery law “may be repealed as soon as April 12th, putting Jamaica and other Caribbean islands under pressure to repeal their's [sic]” began circulating via WhatsApp.

The April 12 date is significant because this is the day that the High Court will rule in the case of Jason Jones vs. the Attorney General of Trinidad and Tobago. Jones, a Trinidad-born, UK-based LGBT rights activist, has been making a well-publicised bid to remove the buggery clause from the country's Sexual Offences Act on the grounds that it is unconstitutional.

But Jones’ private lawsuit has pushed the issue into public focus once again — and some people are pushing back. By March, those against the repeal of the law were handing out flyers at the country's parliament with the headline, “Take a Stand for the Family”. It further stated that “once homosexuality is legal, it will be taught as normal in all schools, at all levels, to our children” and lead to “gay rights being force [sic] upon us”. “Say no to the LGBTQI agenda”, it admonished, “Say no to indecency, say yes to the natural family”.

The flyer was also being shared on social media, to which Facebook user Rhoda Bharath retorted:

I'm not re posting their ignorant flyer….but any person who dares to tell me what I can and cannot do with my genitals as an adult needs to take several seats.

But they certainly weren't taking a seat. On April 6, 2018, members of various religious groups, under the umbrella of the non-governmental organisation (NGO) “T&T Cause”, marched through Trinidad's capital city, Port of Spain, as they called on the government to maintain the status quo.

Could Jesus plzzzzz COME BACK NOW??!! Could the rapture plzzzzz happen now so that we could finally be free of the holier-than-thous, before they think that they can impose their own rigid beliefs & sick bullshit on a multicultural society & system of varied beliefs & belief-syst….oh waittttt! Too late! 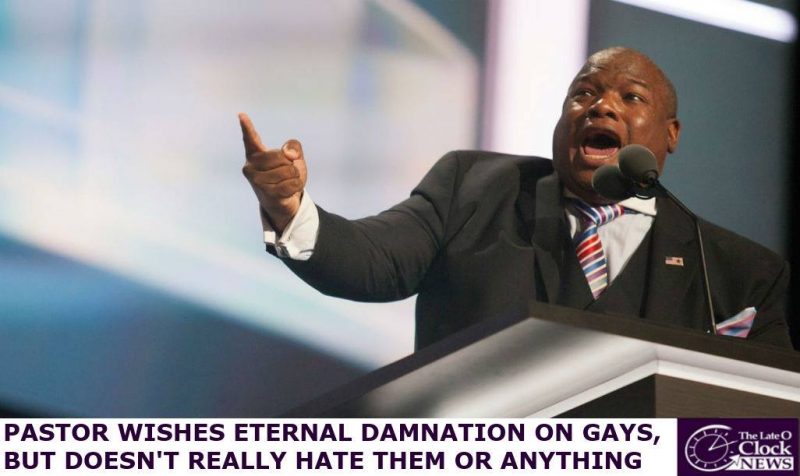 Meme by The Late O'Clock News, which is captioned, “Pastor wishes eternal damnation on gays, but doesn't really hate them or anything.” Widely shared on social media.

Three days later, on April 9, members of the local LGBT community, along with citizens who support the repeal of the buggery clause, hosted their own protest in response. Social justice advocate Brendon J. O'Brien posted photos from the rally, explaining that he was “standing for a free and equal Trinbago.”

Speaking with Global Voices about the march, O'Brien added:

As someone involved in the church, it's terrifying to see how people are willing to weaponise faith to spew hate, or even ambivalence, towards people who love differently than them. Changing this law isn't even about faith, or what particular people believe. It's about maintaining the freedom, safety and dignity for every single Trinidadian, regardless of who they love or how they express that love.

The buggery law affects all of us […] Which right-thinking citizen cannot but be affronted by the law’s unjustifiable incursion into matters that should properly be left to the will of consenting adults behind closed doors?

Time and again we are told that gay citizens are equal and that none should be discriminated against. Yet to date our Parliamentarians […] have not amended the Equal Opportunity Act that allows a boss to fire a worker because they are gay. Nor have they repealed the Immigration Act that bans the entry of homosexuals. Nor the criminal statutes with their range of archaic, colonial-era provisions. The problem is not the law. The problem is our culture of hate condoned by those who rely on us for their authority. The problem is the willingness of the powerful to allow the dignity of the few to be trammeled upon under the dubious belief that might is right.

This “might is right” approach has been taking a beating on both social and mainstream media. In the public Facebook group NEWSHound, Leslie-Ann Boisselle shared an opinion piece by Ryan Hadeed which bashed past and current government administrations for “[paying] lip service” to the LGBT cause “but ended up lacking the political will to address it directly”.

Comparing the issue to the controversy surrounding the recently abolished law on child marriage, the article also lamented the “twisted logic” of religious fundamentalism:

Religion must not trump reason when it comes to basic human rights. […] Legislative fortitude is lacking when it comes to protecting the rights of gay citizens. And the issue is instead being left up to the courts to determine whether the before-mentioned law is unconstitutional. […] Even if the law has never been enforced, as long as it remains on the books it labels some of our citizens as criminals due to their sexual orientation. That notion cannot be allowed to continue.

Perhaps, though, poet Shivanee N. Ramlochan summed up the crux of the debate most eloquently:

Because many of my people put their bodies in public space today, holding signs, asking questions, daring, and showing up — because of that, I'd like to affirm that my politics is queer. […]

Queer like church on Sunday morning, when everyone calling the smooth-skinned soloist a bullerman behind his back is shedding tears from the majesty of the notes he ascends. Queer like nobody giving him a drop home to Talparo after, but praising his praisesong over their macaroni pie and callalloo, with fresh salad. […]

Queer like you wouldn't believe, but know you're actually too smart to disbelieve, and one day that same lack of belief will catch you around your own throat like a lasso, and maybe don't be surprised if you bleed a rainbow.

Queer like there was gayness here before Columbus was a thought in his father's genealogy. The kind of LGBTQ+ that doesn't get discovered. The kind that was always here, on these islands, never once thinking to ask permission. The kind that will still be here, with or without the kind civil condescension of law.