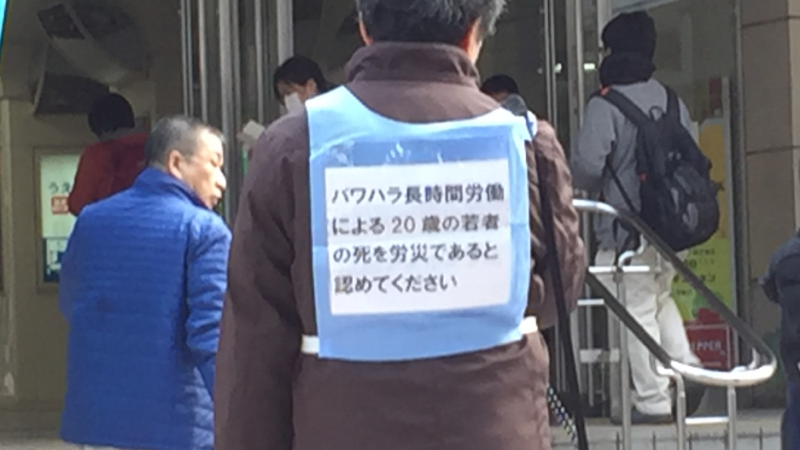 The sign reads, ” Please recognize the death of a 20-year-old youth who was worked to death due to ‘power harassment’ as a work-related death.” Photo by Global Voices contributor.

In March 2018, three activists handed out leaflets and tried to collect signatures at the JR Rokkomichi railway station, in the Nada ward of the city of Kobe. The trio wore blue bibs over their jackets with a message written in Japanese that read:

Please recognize the suicide of a 20-year-old youth due to ‘power harassment’ as a work-related death.

The leafleters were attempting to focus public attention on the death of Maeda Hayato, which the protesters claim was as a result of “power harassment“, or workplace bullying. Before he committed suicide, Maeda worked at Goncharoff Chocolate, a popular regional confectioner with a sales outlet in the Kobe railway station.

According to a December 2017 Sankei Shimbun story about his suicide, Maeda joined the Goncharoff team when he was just 20 years old and worked at one of their plants to the east of Kobe. The article noted that Maeda's scheduled work hours quickly increased which meant that, on top of being ignored or yelled at by his boss, he would often rack up as much as 109 hours of overtime per month. Maeda eventually committed suicide by throwing himself on to train tracks at JR Settsu-Motoyama train station in Kobe on June 24, 2016.

While “power harassment” is being cited as one contributing factor to the suicide, Maeda's death after his incredibly long overtime hours resembles “karoshi“, or “death from overwork”. As workers in countries that are part of the Organisation for Economic Co-operation and Development (OECD) struggle with achieving a work-life balance, “karoshi” has been recognized for nearly forty years as a serious problem in Japanese working culture. A recent white paper published by the Japanese government reported that at one in five companies, employees risk seriously damaging their health by putting in 80-plus hours of overtime each month.

While generally used as a colloquialism (and not actually defined when referring to working conditions), Japanese doctors often ascribe the word “karoshi” to sudden death due to heart failure or stroke — as well as suicide — following excessive work. While labor laws in Japan are supposed to limit working hours, employers will often force employees to work off the clock without pay. There are other labor laws that allow employees to formally consent to work overtime if needed.

There are approximately 200 deaths from overwork each year in Japan, but perhaps the most high-profile incident in recent times was the suicide of Takahashi Matsuri, an employee at the prestigious Japanese advertising firm, Dentsu. Takahashi worked 105 hours of overtime at Dentsu the month before she committed suicide and tweeted that she only slept two hours a night.

Japanese courts ruled that Takahashi's death was caused by overwork, and after some pressure from the media, the president of Dentsu resigned in December 2016. A subsequent investigation found that Dentsu violated labor regulations, and the advertising company was fined 500,000 yen (US$4,400). No managers were prosecuted.

Mother of Dentsu's Takahashi Matsuri unhappy with inquest decision not to indict supervisors.

While Dentsu has promised to reduce working hours by 20% in the coming years, as well as encourage remote working, “karoshi” still remains a social problem in Japan. In 2016, an employee at a power plant died — as well as a second worker at Dentsu — allegedly due to overwork. More recently, a man in northern Japan died after regularly working more than 80 hours of overtime per month.

Even as “karoshi” is recognized as a social problem, the Japanese government is doing little to discourage the practice. In order to deal with labor shortages and low productivity, the Abe government recently planned to loosen Japan's laws regulating overtime, making it easier for employees to work more. Due to faulty data, the government has shelved this idea for the time being.

Meanwhile, apart from a Sankei Shimbun interview with his mother, Kazumi, Maeda Hayato's death has received little attention in the Japanese press. But Maeda Kazumi is resolute and is seeking compensation from his former employer for her son's untimely death. While Goncharoff waits for the local labor bureau's decision, a mother is still without her child. As Maeda Kazumi told the Sankei Shimbun, “I feel sad that I lost my bright and gentle son.”