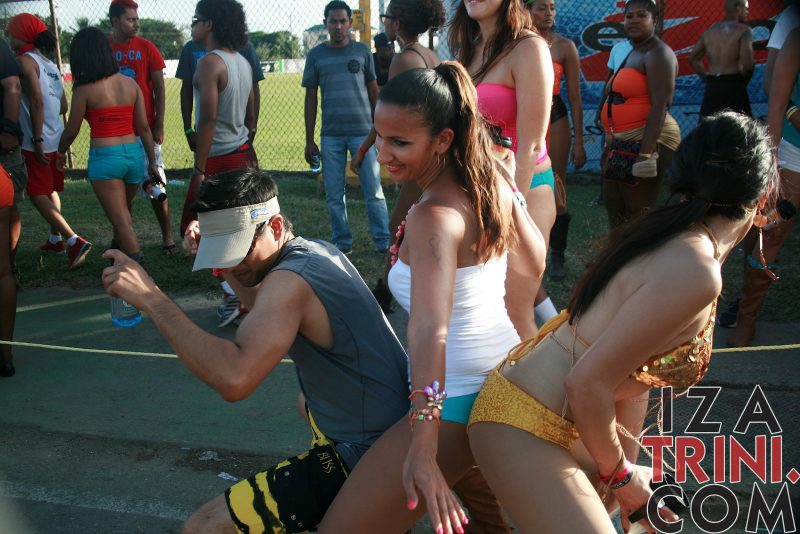 A consensual “wine” in progress at a fete (party) during Trinidad and Tobago Carnival 2013. Photo by IZATRINI.com, CC BY-SA 2.0.

Trinidad and Tobago's latest controversy is over a law that makes it necessary to have permission to “wine” — a hip-swivelling dance which is traditionally a free-for-all during the country's annual Carnival season.

Making the point that touching someone without their permission is considered assault, the Trinidad and Tobago Police Service (TTPS) warned Carnival enthusiasts that they could be arrested for non-consensual gyrating.

The move went down well with some feminist organisations, who thought it was about time that the culture surrounding Carnival and women's bodies changed, especially in light of past violence against women during the street festival. However, there has been some pushback — literally.

The whole issue got ratcheted up a notch when one local newspaper splashed a photograph of soca star Machel Montano gyrating on a female patron during his performance at a Carnival fete and another newspaper quoted the star as saying “when it comes to wining, it’s better to seek forgiveness than permission”. Montano advised the crowd to ignore the advice of the police to seek permission before “thiefing [stealing] a wine”.

On her Facebook wall, Maria Rivas-Mc expressed her disappointment over his comments, saying:

Ahh … words have power and are even more powerful when you are someone of note. Machel could have used the opportunity to speak about respecting women, and all people.

But Keith Francis was not surprised:

Sitting here wasting a brain cell trying to figure why people are surprised at and disappointed with Machel… ?
#BrandNewIsTheNewBrandNew

Not long after the star's comments, one female party-goer accused two men (via Facebook) of touching her without her permission. One of the men who was named recorded a Facebook Live video denying the accusations as “completely false”, although he later admitted that there were “some true bits to it”. The women's advocacy group Womantra referred to the incident as “physical assault during the Carnival Season” and chastised Machel Montano for adding fuel to the fire, saying his suggestion “that a man's ‘right to wine’ is more important than a woman's consent” was “irresponsible”.

It is absolutely infuriating that people are discussing this ‘new law’ about wining.
Morons, it is assault to just jump on someone and start gyrating, and it always has been. The problem has never been tiefin a wine; the problem is dudes who can't take a brace and decide to press the issue. So the police just pointed out that, yes, you can get arrested for assault in that scenario. Dumbass.

Omari Ashby added an important perspective by going back to the genesis of the dance itself:

this wine debate is what happens when traditional knowledge is not passed down…….we figured this out years ago….as a matter of fact the asking for a wine was part of the dance itself.. the dance of the the winer and the wineee (sp), the approach would be made the offer would be accepted or declined, all within the dance moves…but we failed to have faith in ourselves and our way of doing things.

A sexual advance is not sexual assault.
If you advance and I turn you down and you persist…that is where the problem starts.

Flirting is not a crime.
Forcing your attention on someone is.

Meanwhile, Natasha Ramnauth pointed out to her Facebook friends that consent applies to men as well:

I hope women are also paying attention to the ‘thou shalt not wine on unwilling people’ edict. It's all well and good to stand up and be empowered and all that but it works both ways. Men can and do say no. Move along.

Soon, however, there was a backlash against the lyrical content of Machel Montano's music, much of which — like most soca offerings — talks about “wining” on women.

Bharath nipped that line of reasoning in the bud:

In 2018 all yuh find he tone deaf and irresponsible?

In 2018 we vex with a soca artist for giving us commands that we mindlessly obeying?

When we go done pappyshow weself and accept responsibility for anything, boy?

All yuh does kill me, oui.
#DeViceCyahDone

In 2018 you all find he's tone deaf and irresponsible?

In 2018 we're vexed with a soca artist for giving us commands that we're mindlessly obeying?

When will we stop fooling ourselves and accept responsibility for anything, boy?

You all kill me, yes.
#DeViceCyahDone

While mainstream media published stories about a man who was court ordered to pay a young woman TT $12,000 (approximately US $1,777) as compensation for touching her vagina during Carnival 2009 and ran editorials commending the police on “sen[ding] a signal that lawlessness, large or small, will not be tolerated, no matter who the offender and how culturally acceptable the offence”, Machel Montano apologised and agreed that consent is important so that “women feel safe”.

Attorney Martin Daly suggested that the country “may be having a progressive cultural shift”. He commended Montano for his mea culpa in the face of “alert and swift” public criticism.

But the whole scenario got Jabal Hassanali thinking. Writing a post for Wired868, he mused:

Let me admit up front that I love tiefing a wine. By ‘tiefing a wine’, I mean enticing in a largely non-verbal manner a complete stranger to wine with you. […] Indeed, I daresay, perhaps immodestly, that I have now really refined it to a fine art.

Well, I used to think of it as art as I always assumed these techniques were within the bounds of acceptable social behaviour.

After summarising his approach to seeking permission and running through some of the challenges that might arise in different situations, he addressed the police warning:

The fact is that the CoP’s [Chief of Police's] recent announcement has suddenly opened up a Pandora’s box because, vague and unhelpful as it was, it gave no real indication of what the new normal might be. ‘It depends’ is nice and non-committal, convenient even, but it is hugely problematic because it does not cut it legislatively. Law and ambiguity can’t live in the same house and laws often are pitched at the lowest common denominator because certain people just cannot be trusted to deal with nuance.

[…] And when it’s people’s bodies involved, brother, there can be no room—wiggle room?—at all for individual interpretation of the vagaries of human touch.

So what does a world look like where only verbal permission is acceptable to tief [steal] a wine?

While the blogger thought less harassment was “a definite pro”, he wondered about the domino effect on other aspects of the festival:

The flip side to this […] is that people may just end up wining exclusively on who they know, there will be less social mixing, and the Carnival becomes even more segregated. There will definitely be less bacchanal, and dare I say it? the festivities will lose some of their magic as a result.

Or maybe not. Perhaps now, under the new rules, women will become the new leaders of the wine tiefing movement. […] Yes, the laws will apply to them as well but I don’t see many men being aggrieved by unprompted physical provocation from an empowered woman.

The culture of wine tiefing may be under new management but still in good hands after all. Or, more accurately, in good waists.

At the end of the day, it’s not up to me or to men in general and I’m relieved by that. So, ladies, when you all decide how you want things to go, let me know; I’ll adapt.

It seems that women have already made their decision quite clear: non-consensual wining is not an option.