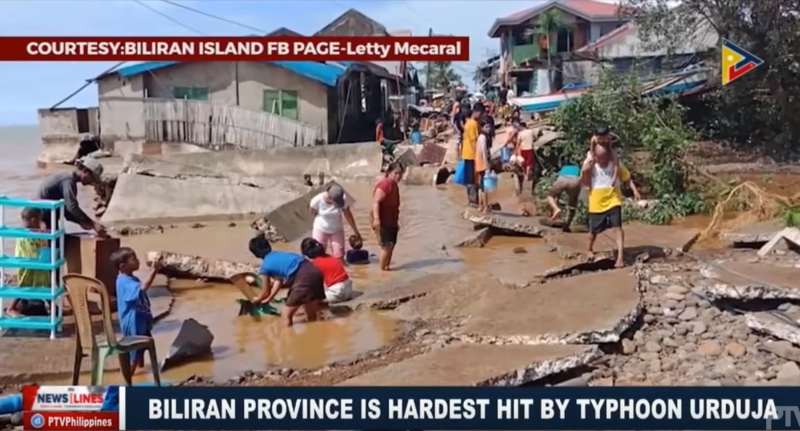 Eastern Visayas is composed of the three main islands Biliran, Leyte, and Samar, which are the easternmost islands of the central Philippine island group of Visayas. Facing the Pacific Ocean to its east, the region is the typical entry point of tropical storms to the Philippines.

Most of the people killed or missing — mostly by landslides, authorities say — hail from the province of Biliran, which posted 25 dead and 25 missing people. Over 44,000 families have been evacuated and at least 16,000 passengers were stranded in various areas of the Philippines.

Tropical storm Kai-Tak caused damage to five bridges that effectively cut off Biliran from Leyte and the rest of the region, thus posing challenges on the bringing of heavy equipment and supplies to the island.

Activist Joshua Musico Sagdullas writes for Eastern Visayas-based alternative news site Eastern Vista to ask if the new government has learned any lesson at all from the devastation wrought by super typhoon Haiyan in November 2013:

What we expected was for the rain to pour and winds to howl, we thought work would be suspended for a day or two and some roads impassable due to slight debris pile up. We would never have thought the storm would cause evacuation-efforts spanning three regions or paralyzed the economy of close to three provinces in Eastern Visayas.

Netizens and journalists have used the hashtag #UrdujaPH on social media to give updates on the storm and post photos of its impact. Groups have also taken to social media to call for donations and disaster relief efforts, especially for some of the most affected areas like Biliran.

The dead left by typhoon Urduja in Leyte.

Netizens have also asked if Kai-Tak’s impact on Biliran was further magnified by the presence of sulfur mining in the area. The Mines and Geosciences Bureau has warned about the threat of landslides in Biliran ahead of Kai-Tak’s appearance.

Many died because of this. Sulphur mining is happening in Biliran. Hopefully the provincial local government unit would be sensitive and address this issue. They are slowly destroying Biliran.

There's sulfur mining in the mountains of Biliran. I've been in Biliran province 35 years this happened to our province only now. Heartbreaking.

But even as tropical storm Kai-Tak has already left the Philippines as it moved to the West Philippine Sea, the country is again bracing for the entry of another weather disturbance which is expected to make landfall on Christmas eve.